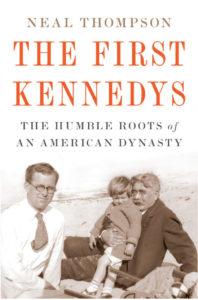 Author Neal Thompson will discuss his latest book, The First Kennedys, The Humble Roots of an American Dynasty, at Edmonds Rotary Tuesday, March 15

The Kennedys have been called “American Royalty”: a dynasty that personifies wealth, political power and glamour. But a mere three generations before JFK became our first Catholic president, his great-grandparents were among the thousands of faceless, dirt-poor Irish immigrants, newly arrived from their famine-stricken country. Thompson’s book is a story of immigration, of cultural and religious prejudice, and of what it means to be American.

Thompson is a journalist and the author of five highly acclaimed books, including A Curious Man (PEN Center USA finalist; PBS American Experience documentary, Ripley: Believe It or Not), Driving with the Devil, and Kickflip Boys. A former newspaper reporter, he has written for The New York Times, The Washington Post, Esquire, Outside, Vanity Fair, The Wall Street Journal, Oprah.com and more. He has appeared on NPR, The Daily Show, The History Channel, PBS, ESPN, BBC and more. He lives in Seattle with his family.

Edmonds Rotary meets every Tuesday at noon at Claire’s Restaurant and also via Zoom. If you would like to attend, visit www.edmondsrotary.com/contact for a Zoom invitation/ID.