The Edmonds City Council voted 6-0 at a special meeting Thursday to extend its moratorium on building permit applications in the downtown BD2 zone until June 2, and also unanimously approved staff-recommended interim design standards.

Councilmember Laura Johnson was absent from the meeting.

The design standards are aimed at addressing council concerns prompted by a 24-unit apartment building proposed for the 600 block of Main Street, located in the BD2 zone. In response to that development proposal, the council at its Feb. 15 meeting approved a two-month moratorium on building permits in the BD2 zone. The moratorium, which applies to projects not subject to the city’s designated street front standards, was intended to give staff time to create interim standards to address gaps in the code that apply to those sites.

At its April 5 meeting, the council agreed to extend the building permit moratorium by two weeks, after hearing opinions from both residents and the city attorney that more time was needed to study the issue. By again extending the moratorium until June 2, city staff will have time to research a topic raised in earlier council discussions: Whether it is appropriate to expand the limits of the city’s designated business zone map to require at least some commercial use of new structures within that area.

Thursday’s ordinance outlining the moratorium extension was approved following an amendment from Councilmember Diane Buckshis, which was approved on a 5-1 vote (Councilmember Susan Paine dissenting). Buckhsnis’ amendment added a whereas clause that describes the impact of a 2013 ordinance — 3918 — in which the BD2 zone is defined as downtown mixed commercial use.

“To me, it’s just a further acknowledgment that there’s a number of ordinances on this BD2 topic that are important to us to understand,” Buckshis said.

As explained by City of Edmonds senior planner Mike Clugston during the council’s March 29 meeting, Edmonds has five downtown business zones. Those located around the fountain, at 5th and Main, are considered the retail core and are designed BD1. Outward from there is the BD2 zone, with mixed commercial; BD3 — toward the downtown’s south end — is convenience commercial; BD4, toward the downtown’s southwestern edge, is mixed residential, and BD5 is the arts corridor. 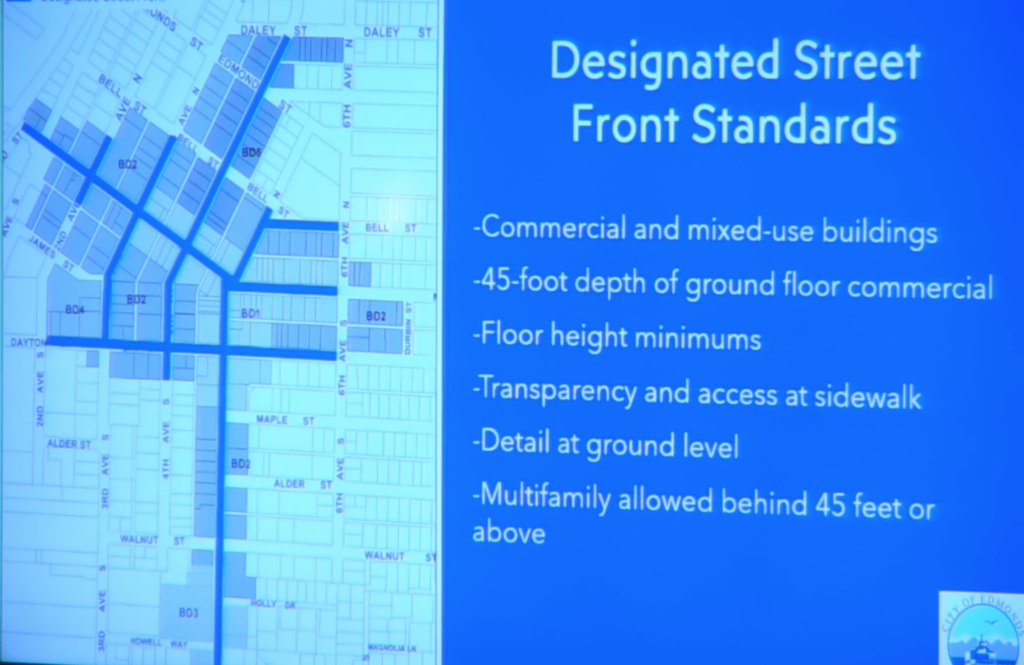 Most of the BD2 zone has designated street front standards (everything indicated next to the blue lines in the graphic above), including floor height minimums, transparency and access at the sidewalk, and required detail at ground level.

But on the edge of the BD2 zone, there are parcels that don’t have these designated street front requirements. Whether additional parcels should be included in those requirements — by expanding the BD2 zone further  — has been the topic of conversation among both councilmembers and members of the public in recent months.

The interim design standards approved Thursday reflected some changes based on council requests Tuesday night. The goal is to ensure multifamily housing units are compatible with the downtown area, with a focus on three requirements: building materials, private amenity space, and a street-side amenity space or pedestrian area.

– Building facades must be clad with preferred building materials that include natural stone, wood, architectural metal, brick and glass. Concrete, laminates, veneers, fiber cement products and the like may be permitted by the development services director or the city’s Architectural Design Board if they replicate the appearance of the preferred materials.

– An exterior area equivalent to at least 10% of the project’s gross lot area must be provided as private amenity space for residents of the development. This standard can be met through a combination of balconies (cantilevered, recessed or semi- recessed), decks, patios or yards forindividual dwelling units or the site as a whole. Based on council concerns Tuesday night related to safety and privacy, rooftop decks were removed as an option for a private amenity space.

– An exterior area equivalent to at least 5% of the project’s gross lot area must be provided as a street-side amenity space or pedestrian area.

– Based on another council-requested change Tuesday night, some roof modulation is required, with a preference for step-downs that follow the slope when such a slope exists.