– A sworn police officer will now work out of the new ‘little’ city hall on Highway 99.

– The city has launched a code enforcement team to inspect motels and hotels on Highway 99.

My Edmonds News has previously reported about increased crime in the Highway 99 community, and the concerns it has generated among residents and business owners. On April 16, shots were fired into a day care, a moving company and near a dance studio. No one was hurt; Edmonds police quickly arrested the suspected shooter.

We asked Mayor Nelson for comments on that incident. His office on Wednesday afternoon released this statement:

“In response to growing community interest, I have directed (Edmonds Police) Chief (Michelle) Bennett to assign a new storefront police officer, specifically assigned to the neighborhood city office,” Nelson said. “This position will be in addition to the other city staff already assigned at the neighborhood office.”

Assigning an officer is an abrupt departure from the original intent of the city’s new Highway 99 office, which just opened on a part-time basis a month ago. Originally, it was to be staffed by Edmonds Police Community Engagement Coordinator Tabatha Shoemake, a veteran civilian employee of EPD.  She was scheduled only for four hours a day Tuesday-Thursday and has other duties. She will still work there. In addition, the city is trying to hire a permanent front desk person, and Edmonds Municipal Court is scheduled to hear some cases there as part of its Community Court.

We have asked the mayor’s office and the police department for details; a police spokesperson told us they are just learning about the move and are waiting to see how it might be “best implemented.” City of Edmonds Public Information officer Kelsey Foster said that adding an officer to the site “was a very recent development; if getting security is something that makes sense for safety, we might as well do it.” She said more details will be coming.

Gunfire near a day care, a dance studio and a moving company mark recent violence in the area. Plywood covers the shattered door at the Great Kids Academy on 240th, just off Highway 99. The shooting took out the glass door on a Saturday; no children or adults were present.

The day care owner, who only offered his first name, Stefan, told me “there are so many rumors”; insisting that the shooter was not aiming at the day care. But police say two shots punctured the door and they found seven shell casings and one live round outside the day care building.

Jay Myers was in an office across the street. “I heard two shots and then three or four more,” Myers said. “I looked out the window and here he was walking casually up the parking lot. I looked at the front door of the day care center, glass was just sprinkling down… then he (the suspect) walked up to 99 and stood there on the sidewalk with a gun in his hand.” Myers and another neighbor were already on the phone with Edmonds police.

Shawn Unger’s business is also across the street from the day care. Unger thought, “what in the world is wrong with people…thank God the place (the day care) was closed.”

An alert teacher at the neighboring Academy of Music and Dance also heard the shots, saw the suspect in their parking lot and, police say, did a good job sheltering her class until officers arrived.

Two bullets also slammed into a truck at All-Star Transfer and Moving. Owner Laron Williams said the shots did no damage but that in his 25 years there, things “are as bad as they’ve ever been.”

Within 15 minutes, officers tracked down the suspect two blocks away. They discovered a .40-caliber Glock handgun in a trash can and took ammunition from the suspect. Edmonds police spokesperson Sgt. Josh McClure said the arresting officer reports there “appeared to be some mental health issues with the suspect.” He was booked into Snohomish County Jail on three charges: reckless endangerment, discharging a firearm and a felony malicious charge of firing a weapon.

This neighborhood sees more violence than any other in the city. One resident told us the residential community around 76th and Lake Ballinger is “family-driven, a lot of young families, we feel very safe,” but added, “I go a half mile up and it’s a whole different world.” The resident asked us not to use his name; he has lived in the area for six years.

Willliams, at All-Star Transfer, told us he and his crew often have to “throw people out of our trucks”; that they sometimes set up camp inside them. He bought a new truck last year; it’s already been stolen twice and used in crimes. Williams took a couple days off and said a group had set up in the back of an old truck, run an extension from an outdoor plug and was cooking drugs in the truck when he got back.

One of his mechanics was working on a rig when, Williams recalled, “a guy ran up behind the mechanic and the mechanic swung around and caught the guy with an elbow to the chin and knocked him cold. Cops were right behind the suspect; they’d been chasing him.

Highway 99 ranks high on the city’s police call-for-service list. Last year, the Center for Public Safety Management performed a police audit for Edmonds, as the city has searched for a new chief. The graphic below shows where most of the city’s police calls originate. Five of the highest reporting areas stretch along 99. 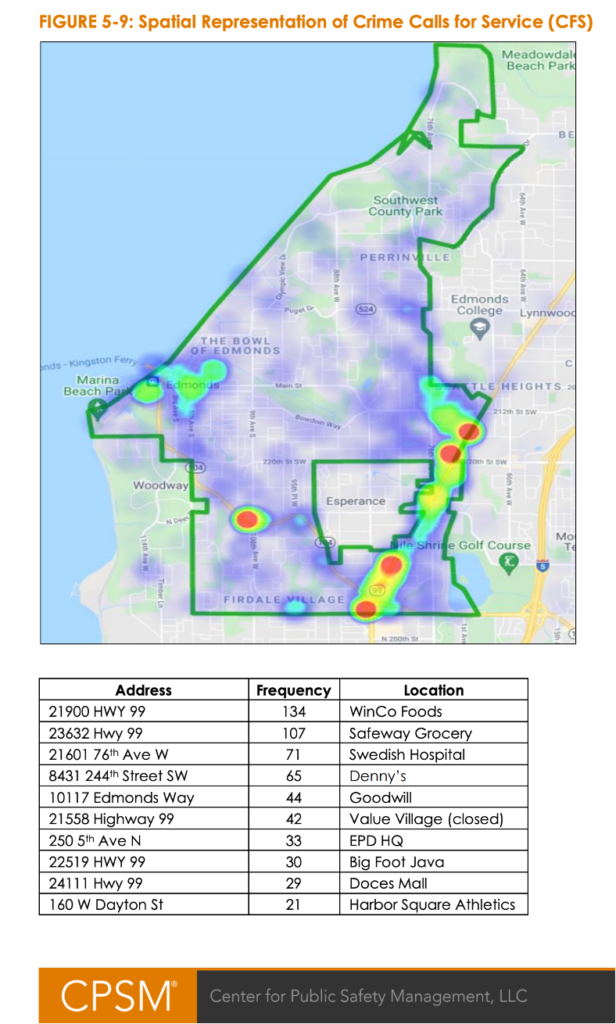 In a story My Edmonds News published in January 2022, Mayor Mike Nelson weighed in on a rash of arrests, drugs and gunfire around the Emerald Best Motel, in the 22000 block of Highway 99:

“The gun violence that has impacted our Highway 99 community will not be tolerated,” Nelson said. “Our police officers have responded to multiple shootings that are putting them and our community as a whole at risk. We will not allow businesses to be a safe haven for dangerous criminals. We will provide the support and resources needed to address this critical public safety issue.”

In the same story, City Councilmember Will Chen, who works and lives near Highway 99, said that what happens there “will impact not only 99 but the entire city and the region.” He wants the city to “get it under control so that our businesses and residents can feel safe in and live in this area.”

That’s what residents and businesses want – to “…feel safe and live…’ said Stefan, from the day care. “I’m doing my best to keep our employees and the children safe.”

The Lake Ballinger resident said, “we have noticed a much bigger police presence in the motels and on the drug dealing (on 99)” but added that neighbors want more.

The mayor’s new announcement also reveals that the city now has what he called a ‘special code enforcement’ team to conduct inspections at hotels and motels along the Highway 99 strip. The team, working with the state and county, has conducted inspections at Emerald Best Hotel, where in four months last year and early this year, Edmonds police made 20 arrests for drugs, gun crimes, stolen cars, violations of court orders and outstanding warrants.

In that time, police responded to 110 calls at the motel. Police spokesperson Sgt. Josh McClure told us then that “It is the number-one public safety issue in Edmonds. This is the most violence we have ever seen (in the city).”

Just a week ago at America’s Best Value Inn, Edmonds police shot and killed a domestic violence suspect after police say the man came at them with a knife. One officer used his taser; when the suspect did not stop, another officer opened fire.

The mayor’s announcement states the code team plans to conduct inspections at other hotels and motels along Highway 99. “It appears the news of inspections is prompting these establishments to proactively eliminate problematic guests and clean up other issues,” the mayor said.

We spoke with Shawn Unger, whose business backs up to Highway 99. about assigning a cop to the Highway 99 neighborhood office.  “Do they really need it?” asked Unger; “If he was there, what are his actual duties; or is the entire job just to be there for the city employees?” And he wondered, “wouldn’t it be more beneficial to the taxpayers to have a security guard there; isn’t that more cost effective?”

The neighborhood has also experienced challenges related to people who are homeless and living out of vehicles or tents. The city’s human services program and police department have been working together to address the issue, and on Tuesday night the Edmonds City Council began debating a proposed ordinance that would allow police to cite individuals on public property under two conditions: 1) When available overnight shelter exists and 2) when that available shelter has been offered and refused.

At All-Star Transfer, Loren Williams said he has had problems with a woman who sets up camp “with a whole load of stuff” in the company’s parking lot. He told the story of a couple in a van who asked if they could stay there a few days; “three weeks later,” he said, “the cops had to open up the van” to get them out. Williams agreed that homelessness is not just an issue in Edmonds or Seattle but is an American problem.

He hopes the city neighborhood office can help; “awesome; I didn’t even know about that; it will be great,” he said.

The Lake Ballinger resident concerned about crime asked: “Where are the priorities here? Is it just good news releases or is there a commitment” to this community? “The part I really cannot stand,” he said, “and it’s almost driven us to move out, is Highway 99… it’s really frustrating.”