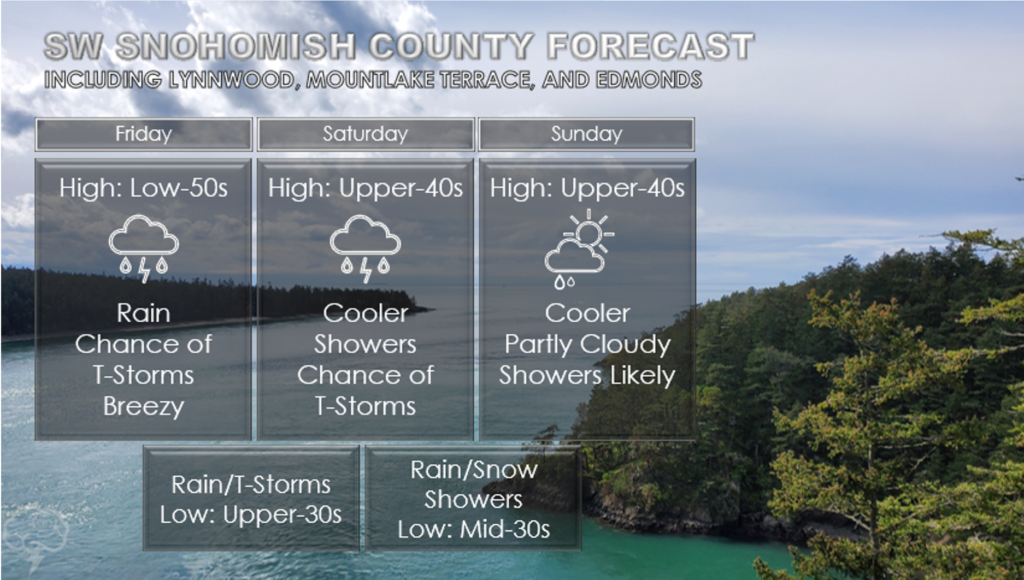 The month of March is officially in the books and April is well underway. We finished March with 1.14 inches of rain, compared to the average of 3.63 inches. This actually is the lowest monthly rainfall total for the month of March at Paine Field. A graph showing the total March precipitation for each year since 1999 is shown below. The highest temperature we saw was 63 degrees, while the lowest was 30 degrees—neither of which are particularly impressive nor out of the ordinary.

At the time of writing this on Thursday, Paine Field is experiencing its warmest temperatures of the year thus far. Temperatures have already reached a high of 68 degrees, and it’s very possible we could see our first 70-degree day of the year by day’s end. It’s a little taste of what’s to come in the coming months as we inch closer to summer—but, unfortunately, it’s not going to last. This “mini heat wave” is a one-and-done deal, with an abrupt change in the weather pattern coming on Friday.

A frontal system will hit the coast Thursday night and will begin to impact us in the early morning hours of Friday. This will be the beginning of a wet and showery weekend, but that’s not all. It will also be the start of significantly cooler temperatures. Highs will drop down into the low-50s on Friday, then all the way into the upper-40s by Saturday and Sunday. Compared to the highs on Thursday, this will be quite the difference—approximately a 20-degree one. Overnight temperatures will even drop into the 30s.

After the front, showery weather will persist with an upper-level trough in place. Along with this, there’s a chance of a few thunderstorms Friday and Saturday, which could bring periods of heavier showers, gusty winds, and even hail. If you have any outdoor plans, I suggest paying close attention to the weather as these t-storms can show up suddenly.

With overnight temperatures dropping into the 30s, the snow level will also be dropping. As a result, some hilly areas could see some snow mixed in with rain in the early morning hours of Sunday. No accumulation is expected from that, if it even occurred at all. But for us closer to sea level, it should stay as a cool rain.

The showery, cooler pattern is expected to last into the beginning of next week, albeit not quite as cold as over the weekend. For those utterly bummed over the forecast, don’t fret—in the matter of months (or even weeks), Thursday’s weather should become much more of the norm rather than an outlier.