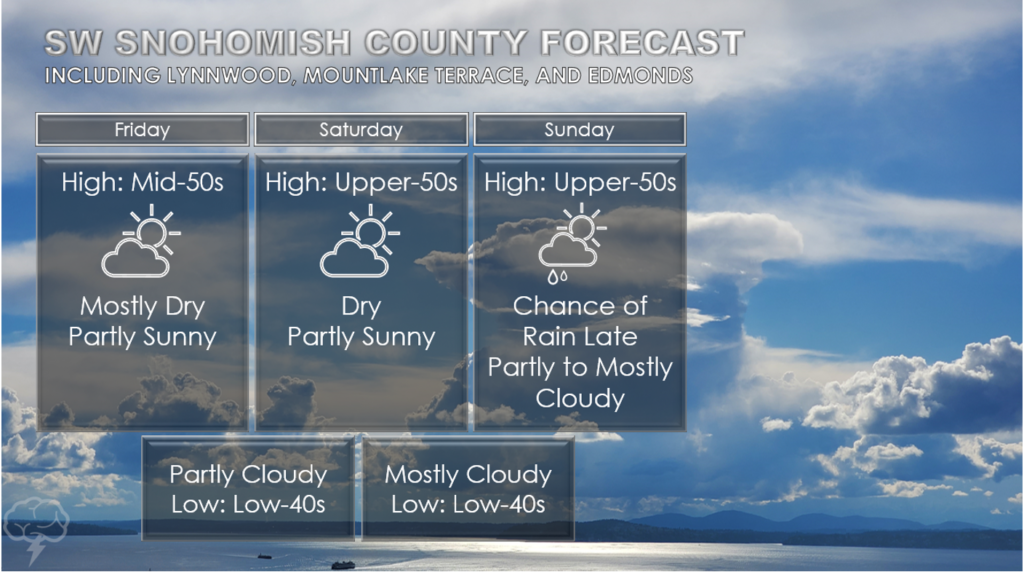 I hope that everyone had a great Easter! It wasn’t the warmest day, but it was dry and sunny. Speaking of temperatures, we’ve been running a little cool over the past couple of weeks. Take a look at the following graphic, which shows our temperatures for the month so far at Paine Field.

The brown color is our average temperature range using past climatological data. As you can see, for the past couple weeks, our high temperatures have fallen within the normal range, but generally on the lower end of that range. Our low temperatures, on the other hand, have definitely fallen in the below-average range. In fact, we’ve actually had three new daily record lows set, which can be seen where the blue bars touch the light blue line.

Heading into the weekend, our low temperatures may still slightly fall in that “below-average” range, but the high temperatures could break out of the brown and just make it into the above-average zone.

As we head into Friday, an upper-level low (a common phenomenon in our area for the majority of the month so far) will begin to weaken. Friday is looking mostly dry at this point, but the chance for a few isolated showers cannot be ruled out entirely. A weak upper-level ridge will develop later in the day Friday and into Saturday, which will help facilitate actual spring-like weather.

Saturday is looking to be the nicest day of the weekend, with temperatures approaching the 60s and partly-to-mostly sunny skies. This would be a great day to get outside for a nice spring day walk or perhaps even visit the beautiful tulips in Mount Vernon.

Sunday is also looking like a nice day, with temperatures again approaching the 60s. However, clouds will likely increase over the course of the day ahead of our next system scheduled to arrive late Sunday and into Monday.

This signals a return to the weather that’s been the norm so far this month—cooler temperatures and showery weather. In fact, take a look at the images below, courtesy of the Climate Prediction Center.

These images portray the probabilities of above- or below-average precipitation and temperatures. Because weather models are not as reliable several days in advance, a model can be run multiple times with a slightly different initial conditions (each one called an ensemble member), which results in a variety of end conditions. These end conditions can then be used to determine a probability of a certain event occurring. Based on the above maps during the appropriate timeframe, we have a 33-40% chance of above-average precipitation and a 60-70% chance of below-average temperatures. This doesn’t mean that these conditions will happen—remember, these are probabilities based on climatological averages. But these maps (and the ensembles that are used to create them) are helpful as guidelines for what we could expect beyond what deterministic models (i.e., a model that predicts a single and specific outcome) can reliably predict.

Have a great weekend, everyone. Enjoy the nice weather!