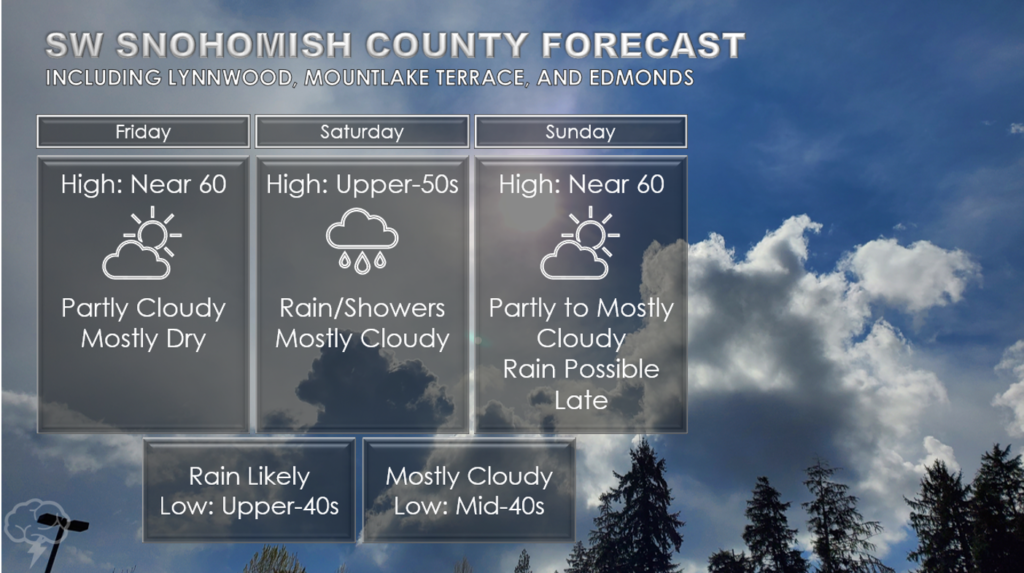 The month of April is almost over—crazy, isn’t it? The month’s weather as a whole could be characterized by two words: cool and showery. We’ve had moments of excitement with the occasional bout of hail and lightning, but overall, there hasn’t been much to write home about.

Speaking to the cooler temperatures, take a look at the following graphic, which gives a visual depiction of the temperatures we’ve seen over the course of the month (at Paine Field).

Last week, I mentioned how we have had numerous days with minimum temperatures cooler than average, in addition to high temperatures struggling to make it out of the normal range. Fast forward to this week, you can see how we had one major anomaly last Sunday, which saw a high of 67 degrees—but overall, the trend continues. We’ve actually seen the fewest number of 60-degree days since 2011. We’ve also seen the most days with minimum temperatures less than or equal to 40 degrees since 2011.

Turning our attention to precipitation, take a look at the following two graphs, depicting the total precipitation and the number of rainy days for the month of April for each year since 1999 respectively. 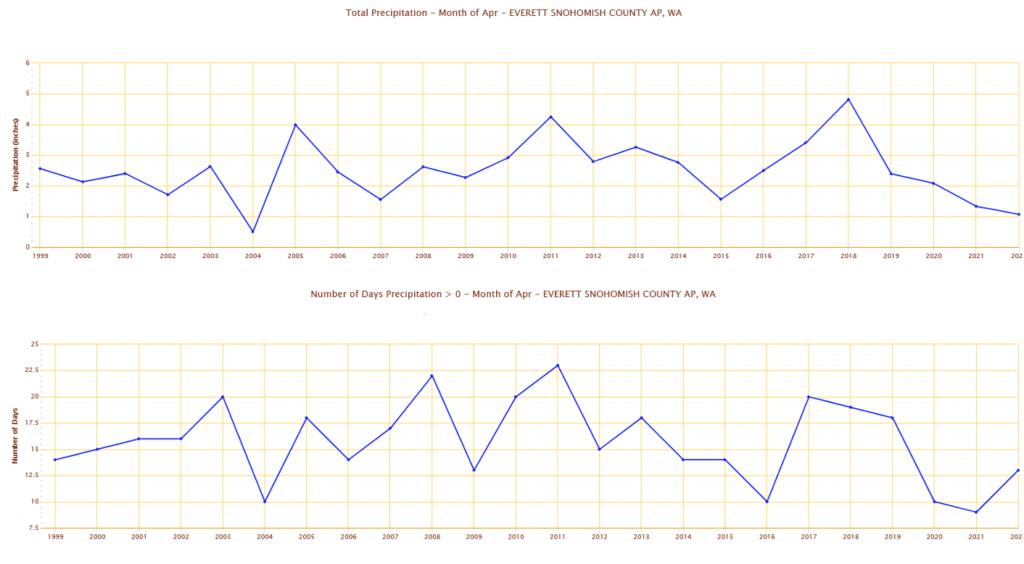 In the first graph, you can see that the total amount of precipitation is the lowest it’s been since 2004. Only 1.07 inches of rainfall has been measured thus far, with the normal being 2.53 inches. In comparing the two graphs, we also discover something interesting. Both 2020 and 2021 had greater precipitation totals than 2022, but they had a lower number of rainy days (in this case, defined as greater than 0 inches of rainfall). This reveals that we have had lighter precipitation rates and/or shorter duration events this year compared to the previous two years.

As we look to wrapping up April on Saturday, we have one more bout of rain to deal with before beginning the new month. Before that, however, the work week looks to end on a high note. We’re expected a nice spring day with highs near 60 on Friday. Some models suggest there could be a few scattered showers in surrounding areas, so a brief shower may not be completely out of the question—but overall, it’s looking mostly dry. The next system arrives Friday night, and thanks to an upper-level trough, we will remain showery on Saturday. Highs will drop into the upper-50s, which is close to normal for this time of year. By Saturday night, the showers should be mostly wrapped up.

Sunday is looking similar to Friday in terms of temperatures but has the possibility to be cloudier ahead of another system set to arrive Sunday night through Monday. Regardless, Sunday is looking to be another nice day as we begin the month of May.

The rain returns Monday, but afterward, there is a chance that we could dry out through midweek. Stay tuned to current forecasts to get the most up-to-date forecast information.

Have a great weekend! Here’s to May.

One Reply to “Under the weather: Mix of sun and showers expected for last weekend of April”