Assistant Chief Rod Sniffen began the ceremony by talking about National Police Week– this year May 15-21 — which honors the 900,000-plus law enforcement officers serving across the U.S. — as well as the 23,000 officers who have been killed in the line of duty since the first recorded death in 1786.

In his remarks, Sniffen also asked the audience to join him in a moment of silence for Edmonds Police Officer Tyler Steffins, who died “in an act of senseless violence” while off duty in Las Vegas March 26.

Ceremony emcee Sgt. Shane Hawley started the evening with Citizen Service Citations, awarded to those “whose assistance to the police department was given without regard to personal welfare, or which had a positive bearing on the outcome of an incident and contributed to the furtherance of law enforcement in the community.”

The first award was presented to Adam Bock, who rescued the pilot of a small plane that made an emergency landing near Edmonds’ Marina Beach Aug. 27, 2021.

Bock was out fishing on his boat when he noticed a small plane” flying quite low and noted it was unusually quiet,” Hawley said. “Believing that the plane was in big trouble, Bock started heading toward where the plane was going to land in the water.” He arrived as the pilot was getting out of the sinking aircraft and found him on the wing. Bock then manuevered his boat close enough to help the pilot in.

“There were no other passengers and within a couple of minutes, the plane was completely submerged,” Hawley said. “Mr. Bock was also alert enough to note the GPS coordinates to pass onto authorities that would be recovering the plane.” Bock then drove his boat to the marina to deliver the pilot to the waiting aid crew that was there to check on his well-being.

“Because of his willingness to get involved, Mr. Bock might well have saved the pilot’s life,” Hawley said.

Next, Hawley recognized a group of men who physically intervened to detain a robbery, kidnapping and assault suspect in an attempted car jacking, allowing police to take the suspect into custody.

The awardees included three friends — Kaleb Yigezu, Alemneh Shiferaw and Bimnet Negussie — who were car shopping at Lynnwood Honda on Edmonds’ Highway 99 the evening of June 16, 2021, and Aven Yousef, who was working there as a lot attendant.

Across the street at the Harbor Freight store, a man was trying to break into a different Honda in order to steal it. “That was called into 911 and our officers responded to the area,” Hawley said. “The suspect got spooked and took off on foot down the highway.” Seeing the police cars, the suspect ran up to a van with three people in it, opened the car door, jumped inside and immediately began choking one of the passengers. “He threatened to kill the passenger if they didn’t drive him out of the area. One passenger was able to get out of the vehicle and flag an officer down to let him know what was happening,” Hawley explained. The vehicle drove off a short distance and the officer caught up to it. At that point, the suspect was assaulting the passengers and trying to take the car so he could get away.

The suspect ran from the vehicle when the officer approached him, into the Lynnwood Honda lot. Yigezu, Shiferaw, Negussie and Yousef were able to see the suspect choking the passenger and everyone screaming for help, Hawley said. “They also saw the suspect running away from the officer and knew they needed to act. All four of them physically intervened, which gave the officer time to catch up and take him into custody. Kaleb kicked the suspect in the leg, while Alemneh kicked him in the side. They all got involved and helped us get the suspect into custody.”

The suspect was arrested for robbery, kidnapping and assault.

“Because of their willingness to put themselves in danger and intervene, a dangerous felon was apprehended,” Hawley said. 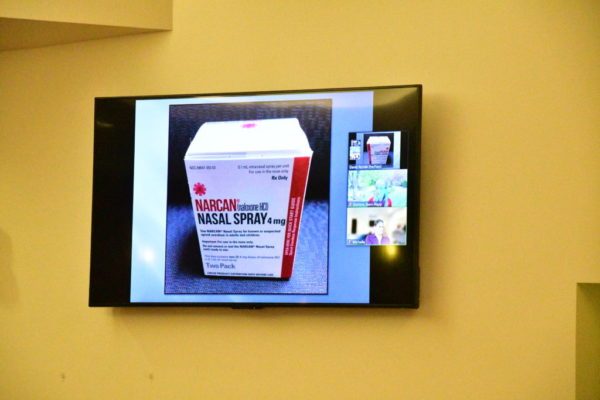 Hawley then noted the contributions of several department members who in 2021 used Narcan 17 times to treat those who had overdosed on opioids. “Because of their efforts, several families did not have to endure the loss of a loved one,” Hawley said. “We applaud them for their life-saving work.”

Following this, Hawley and co-worker Sgt. Josh McClure were given special recognition for the extra hours they spent as acting assistant police chiefs during the 2021 search for a new Edmonds police chief.

Hawley then continued on to the next honor, a Letter of Commendation awarded to department employees — or officers from other law enforcement agencies — “who perform particularly noteworthy acts or service based on determined and intelligent performance.”

In March 2021, Brown was dispatched to contact a woman who barely spoke English, and from what she could gather, was reporting a series of very disturbing sexual assaults after being kidnapped,” Hawley said. “Officer Brown was able to start gathering the basic information and notify detectives.

Martinez was on his day off, but answered the call and rearranged his entire schedule to come in and provide translation services. He worked with Detective Stacie Trykar who interviewed the victim for several hours. “By the time that was over, a fact pattern emerged that could only be described as two days of torture,” Hawley said.

“Because of their efforts, the crime was solved and the suspect apprehended quickly,” Hawley added.

The next Letter of Commendation receiptient was Officer Brad Hair

In late September 2021, Hawley said, Hair responded to “one of the most dreaded calls for service any officer could receive.” A 5-month-old child was unconscious, not breathing and turning blue. Hair was nearby and was the first responder to arrive. He was flagged down by the child’s father and rushed inside, where he found the mother frantically trying to render CPR with instructions from dispatch.

“Officer Hair took over lifesaving medical efforts, performed chest compressions and rescue breathing until the first aid crew arrived several minutes later,” Hawley said. “Those minutes feels like an eternity when such a young life hangs in the balance.”

Police later learned that the child has a rare medical condition and a life expectancy of less than a year, “which makes each day that much more precious,” Hawley explained. Thanks to Hair’s initial efforts, the child was transported to the hospital and survived.

The final Letters of Commendation were presented to Detective Patrick Clark and Officer Will Morris.

The morning of July 15, 2021, Detective Clark and Officer Morris responded to a call from a woman who reported her husband was in the process of taking his own life. Just prior to arriving at the house, they received an update that the man was hanging himself, Hawley said.

“Detective Clark rushed inside first and Officer Morris was not far behind,” Hawley said. “They found the man in the attic, standing on a ladder and in the process of lowering himself down. He was getting ready to kick the ladder out when Detective Clark and Officer Morris grabbed him, held him up and removed the rope from his neck. They detained him for his own safety and he was taken to the hospital for treatment.

According to the on-duty supervisor who arrived soon after, “both officers displayed a strong measure of empathy for the man and his wife during a difficult and stressful call,” Hawley said.

The next award was to the Non-Commissioned Employee of the Year, nominated by fellow department employees and “is reflective of the recipient’s significant achievement and dedication,” Hawley said. This year’s winner is Senior Animal Control Officer Jessi Gilginas.

Gilginas “has had an exemplary year,” Hawley noted. “She has demonstrated a consistent team approach, which goes beyond her normal job duties. Jessi has become a fixture on our entry level interview panels. She routinely helps screen new applicants for a variety of positions. This often includes her giving up her own time off to help out.

While on patrol, Gilginas “clearly demonstrates the guiding principles of the police department” and is “incredibly service oriented,” Hawley continued. “Jessi is always out making citizen contacts and truly working on educating the public about animal- and parking-related concerns. She is an excellent representative of the department.”

In September 2021, Ginginas was promoted to senior animal control officer and for the last several months of 2021, was the city’s only animal control officer. “We were also down our dedicated parking enforcement officer, which left Jessi taking on much of that role as well,” Hawley said. “Jessi is always willing to help out and displays a positive attitude. She is truly an example of the department mission statement: Service Before Self.”

The final award was the Chief David N. Stern Memorial Officer of the Year award, nominated by fellow department employees and then selected by previous recipients of the award. This award, given to a full-time, fully-commissioned police officer, went to Cpl. Ashley Saunders.

Two different employees nominated Saunders for the award. One said: “In six years in the training unit, and 27 in the agency, I have never been a witness to this level of productivity, initiative and organization by a single employee.” The other described Saunders as a leader who “serves with selflessness. She constantly looks for ways to serve others and is continually stepping in to assist with critical staffing needs.”

Hawley noted that in spring 2021, Saunders joined the department training unit, and within days had already begun the process of updating the entire department training record database. “She studied the current system in place and began contacting vendors to find a new, all-in-one system to handle our training records and requests.” Once that work was done, Saunders had to manage the transition of thousands of training records into the new system, while still maintaining theold system during the annual accreditation process. “After that, she put together a training program for the entire department so they could effectively use the new system,” Hawley said, adding that she also developed a completely digital field training program.

Last year, the state Legislature made significant changes to state laws that affected law enforcement statewide. “These changes required a lot of research into how they would apply to our daily operations as well as the need to train the entire department,” Hawley said. “Corporal Saunders rose to the occasion, putting together yet another department wide training to address the changes. On top of those challenges, she helped put together two other programs: One for body cameras and the other for the use of drones for field operations.

“If that was not time consuming enough, Corporal Saunders is a valuable member of our Peer Support Team,” Hawley continued. “She donated her time and energy to help officers that might be going through tough times.”

Despite her heavy workload, Saunders also managed in 2021 to complete her master’s degree, Hawley said.

At the end of the ceremony, bugler and former Edmonds police employee Debbie Dawson played Taps, followed by a moment of silence in honor of fallen law enforcement officers.

5 Replies to “Officers, community members recognized for their contributions during annual police awards”