The Edmonds-Woodway High School baseball team scored early and often while cruising to a 11-1 victory over the Mountlake Terrace Hawks during their 3A District 1 Tournament semifinal game May 10 at Funko Field in Everett. Afterward, the sun wasn’t the only thing shining on the field Tuesday evening as the team secured a berth in the state tournament.

The sixth-seeded Warriors pushed runners across the plate in every frame, including putting together a four-run second inning. They secured the win against the 10th-seeded Hawks early in the bottom of the fifth inning due to the 10-run mercy-rule.

Edmonds-Woodway starting pitcher Jacob Gabler experienced some early difficulties, walking the first three batters and throwing a wild pitch that accounted for the Hawks’ only run of the game. But the senior quickly settled into a groove and found his control while striking out the next three batters to limit the damage and end the first inning.

After the initial hiccup, Gabler was dealing from the mound and put together a dominant game in which he racked up nine strikeouts and only allowed two hits and three walks over the course of five innings.

And his teammates provided plenty of offensive support on Tuesday with their bats and assertive baserunning.

Mountlake Terrace starting pitcher Adison Mattix also experienced problems during the first inning, giving up three singles and hitting a batter. Warrior seniors Jack Beers and Lane Corsi laced back-to-back RBI singles into centerfield that both scored a runner from second base and resulted in the Warriors gaining a 2-1 lead they would later expand on.

Gabler retired all three Hawk batters he faced in the second inning, striking out two. Some aggressive baserunning by E-W led to one run and Gabler then further helped his cause while at bat by dropping an RBI double just inside the left-field line. The team later plated two more runners and exited the inning leading 6-1.

In the third, Gabler struck out two more batters and only yielded a single. The Hawks brought in pitcher Tyler Song but the Warriors’ offense didn’t miss a beat.  Junior Grant Oliver layed down a safety-squeeze bunt to manufacture another run and push the lead to 7-1.

Hawks sophomore Talan Zenk notched a double to right-center field to lead off the fourth inning but he was thrown out while sliding into second base after his momentum carried him past the bag. Warriors shortstop Oliver later made a nice sliding play to corral a ball nearly hit up the middle and throw the batter out at first, thereby ending any Hawks’ hopes for a rally that inning.

Edmonds-Woodway again managed to get runners on base and continued to apply pressure while on the basepaths. The team added two more runs, on a balk and a wild pitch, to move ahead of the Hawks by a score of 9-1.

Gabler issued one free pass during the fifth before striking out the final two Hawks batters he faced. In the bottom of the fifth, senior Nathanuel Marinez led off by placing a bunt down the third-base line and beat out the resulting throw for a single. Two batters later, he scored from third on a fly ball to right field that got lost in the sun. The game ended shortly thereafter on a wild pitch that put the Warriors up by 10 runs and triggered the mercy rule.

Seniors helped set the pace for the Warriors’ bats, with Gibby Marshall-Inman, Gabler and Corsi all racking up two hits apiece and driving runners home. Corsi led the team with three RBIs. The Edmonds-Woodway squad also stole five bases on the day.

Zenk and Senior Dominic Kim accounted for the Hawks’ only hits during the game, with one each.

Having already punched their ticket to the 3A state tournament, Edmonds-Woodway will next play the top-seeded Lynnwood Royals for the district championship at 7 p.m. on Saturday, May 14 at Funko Field.

Tuesday’s loss drops Mountlake Terrace to the district tournament’s consolation bracket, where they will face the fifth-seeded Mount Vernon Bulldogs at 4 p.m. on May 14 at Funko Field. The winner of Saturday’s game will earn a berth in the state tournament. 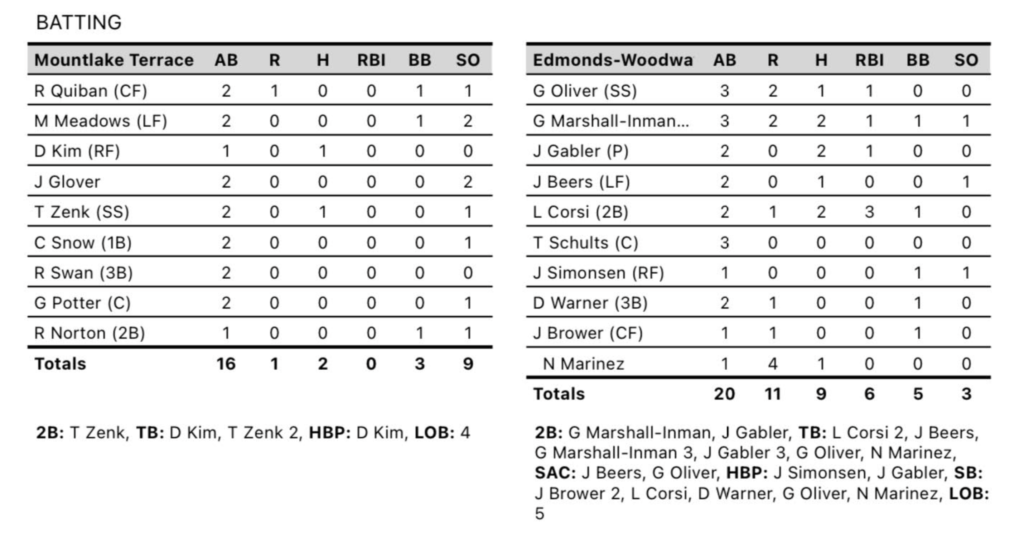