The City of Edmonds Thursday, June 16 hosted the official kickoff for the long-awaited Highway 99 Revitalization Project. Approximately 20 people attended the virtual event to learn more and ask questions about the upcoming construction.

Plans for Highway 99 renovations have been in the works since the Edmonds City Council approved a subarea plan for the highway and surrounding neighborhoods in 2017. The changes aim to address traffic and pedestrian safety and livability concerns for the portion of the highway that runs through Edmonds.

The revitalization of the highway will take place in stages and Thursday’s event focused on stage two. Stage two includes construction of a landscaped center median  from 244th to 210th Streets Southwest.

“During that time [since 2017] we had a handful of open houses and sessions with property owners and tenants and got a lot of feedback that kind of really built up what we designed for stage two today,” said Lisa Reid, the design phase project engineer.

Reid outlined the major features of the construction. Raised, landscaped medians with mid-block, left-turn pockets will be built to replace the center left-turn lanes to reduce collisions. Over 100 trees will be planted in the new medians to enhance the appearance of the corridor. A high- intensity activated crosswalk, or HAWK signal, will be added 600 feet north of 234th Street to increase safety when pedestrians are crossing the highway. Gateway signage indicating entrance into Edmonds will also be built at the north and south ends to welcome visitors to the city.

A graphic presented at the event illustrates what the Highway 99 corridor will look like after this project’s completion. It includes the raised, landscaped median and left-turn pockets.

City of Edmonds Project Manager Jaime Hawkins discussed the construction schedule. According to Hawkins, ground was broken on June 15 and the work is scheduled to conclude in early February 2023. 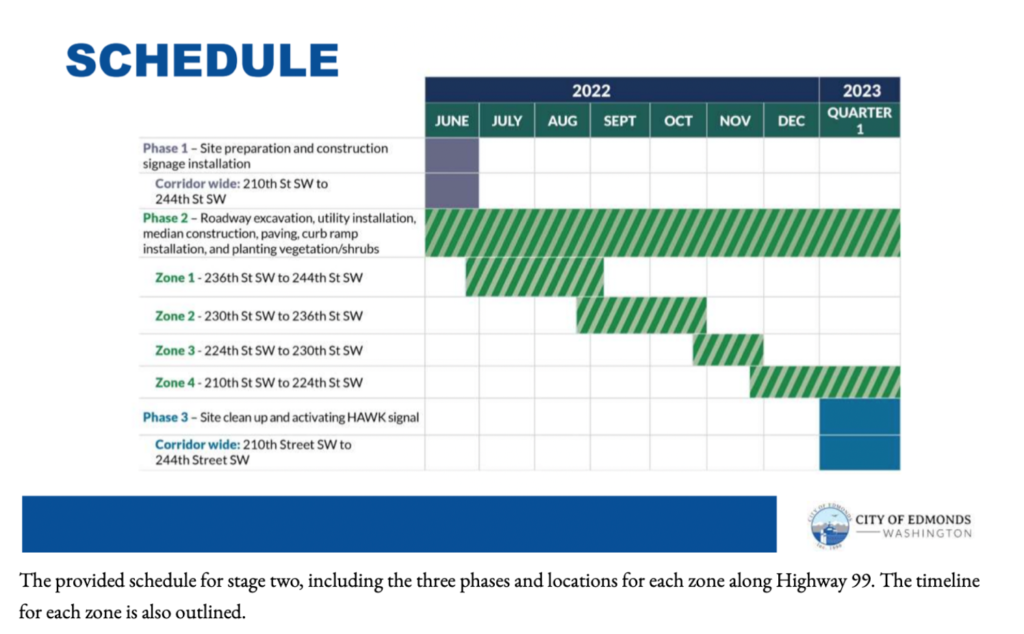 The corridor will be divided into zones for construction. Hawkins outlined the specific work to be conducted in each zone sequentially. Irrigation lines and conduits, electrical conduits and water service lines will be installed for the future greenery. Pavement will then be removed for the raised median, the HAWK signal installed, and finally the roadway will be striped.

“As we move from zone to zone, we want this to be 100% complete. What that means is we want everything to be done at that zone so that we don’t have to come back as we move north,” said Hawkins.

The presentation then shifted to what the public can expect when construction occurs.

According to Hawkins, two lanes of traffic will be available at all times and most of the work will be contained to the center turn lane. If one lane is compromised by the construction, the bus lane will become a general-purpose lane until both are once again available. U-turns will also be permitted at intersections during the project to preserve access to businesses along the highway.

Construction will occur primarily on weekdays between 7 a.m and 5 p.m. However, Hawkins noted that “some work will be required at nighttime” between 240th and 244th. Increased noise, dust and vibration should be expected during this time.

Future work on Highway 99 during stages three and four will begin the design phase in 2022, with $27 million in state funds and $3.2 million secured in state and federal funds, respectively. Improvements behind the curb will be made in these future stages such as lighting and widening of the sidewalks.

The importance of open communication and dialogue between the city and the public was emphasized as the meeting moved into the Q and A portion.

When asked how businesses will be notified of potential loss of access, Hawkins and Lead Inspector Robert Hallowell reiterated that two lanes will always be open for use during the project’s duration.

“Through traffic control we are able to maintain the access at all times,” Hawkins said. “I’ve spoken to all the businesses and invited all the businesses to this meeting. So that is one of the ways that I communicate with the business community out there. They see me and have our contact information– because I want to know how their access, how their business is being impacted in order for us to better their access throughout the construction,” Hawkins added.

Another attendee was concerned about stormwater improvements impacting use of recreation in Mathay Ballinger Park. Hawkins explained that they are only extending and relocating existing structures and that there will not be extensive changes that would affect recreation. Reid added that stages three  and four will include widening and more substantial stormwater improvements.

“As we get into those stages we will look at those impacts and be mitigating water quality and flow control as needed and required for the Western Washington stormwater manual and we can talk about that at future open houses,” said Reid.

Other answers to attendee questions stressed that the construction will not cause major traffic backups and that no other city projects will occur on Highway 99 during the revitalization project.

Some attendees asked how bikes would be routed after crossing at the HAWK signal, and others wondered about additional landscaping work on the sidewalks. Reid stated that those components were not a part of this stage, which focuses on curb-to-curb construction, and could be addressed in later open houses for stages three and four.

Drop-in sessions will be held throughout the project to keep the public informed.

More information can be found at www.edmondscorridor99.org. For questions or concerns, call the 24-hour hotline at 425-224-2424 or email hwy99stage2@edmondswa.gov.