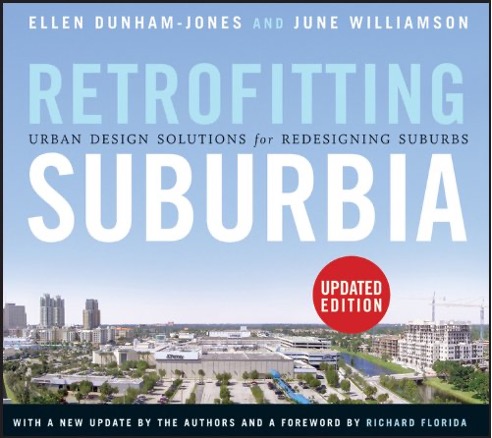 Let’s start this discussion with a few definitions to make sure we’re all on the same page. What is single-family residential (SFR) zoning?

Not so fast, because, as you probably know by now, there is a movement afoot to change these definitions or to eliminate single-family zoning altogether. All with the intent to increase density. Let’s take a look at what we can expect to see going forward, using “urban design solutions for redesigning suburbs”.

The urban planners are telling us that we need multi-family, “missing middle housing” to provide housing diversity and increase housing choice. The goal being to incrementally increase population density at the expense of single-family housing. A mindset with the premise that our current growth trajectory cannot be met by other means. To their credit, they make no claim that this is about affordable housing, because it’s not.

A major theme of these planners is that the urban setting should be walkable, hence why we’re seeing the recent “reimagining our streets and neighborhoods” initiative. Walkable is defined as within a 10-minute walk of a destination. With our topography and weather (and least I mention sidewalk situation), how many of our neighborhoods are within a 10-minute walk of a destination? A destination which serves one’s everyday needs. I’m not saying the concept is bad, and I do applaud the city for reaching out to the community for discussion and input on this idea. The idea may actually have merit in certain areas of our city, but not city-wide.  What I do wish is that the city would be transparent about their intentions and put it in the broader context of our Comprehensive Plan update as a scenario, but not the only option being considered, which right now, it appears to be.

To achieve their goal, they will tell you the “equitable” thing to do is to change ALL single-family residential to allow for these multi-family dwellings. To make it aesthetically palatable they suggest that it’s house-form or house-scale buildings that just happen to have multiple units within them. So called form-based housing.  Any way you slice it, it’s still multi-family housing in SFR zones.

My question is, where are the suburban planners? What if we approached planning for growth from a different perspective or point-of-view? Let’s start with the end in mind.  Do we want a neighborhood suburban environment or a dense urban one? Or, has this decision already been made for us?

What’s happening in Ballard has been a recurring comparison being made by many. I was recently challenged to make the comparison more definitive. I like challenges!  So, let’s take a quick look at Ballard.

I don’t know the history of how Ballard evolved (and continues to evolve), whether there was community input and acceptance or if the developers and politicians ramrodded through their zoning changes. And I’m not going to disparage those who live in, or like Ballard. I will, however, ask if this is the direction we want to take Edmonds?

On my very first Redfin search I came up with the following listing in Ballard: 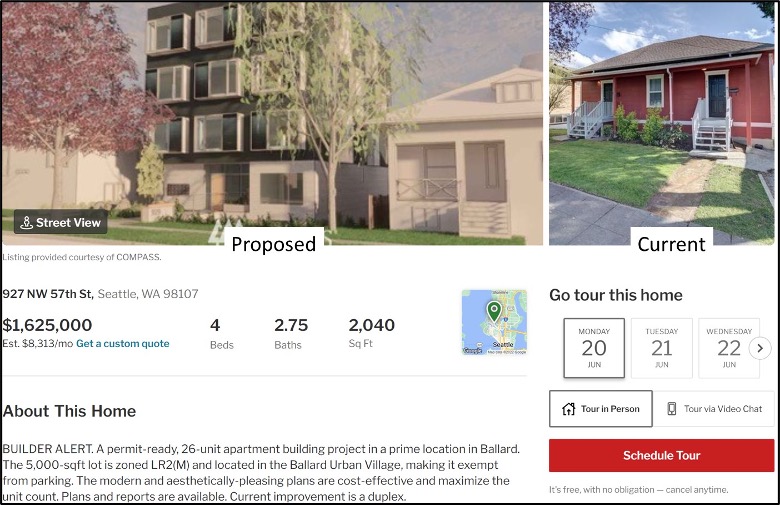 Aside from the unappealing physical aspects of the proposed building in relation to the single-family residence next door, what I’ll draw your attention to is the “BUILDER ALERT” at the bottom of the page. Here we have a small-footprint duplex being advertised to builders specifically for upzoning. And with no on-site parking requirements to boot! This is Ballard today. Edmonds tomorrow?

The main point here is that we need to be careful what we wish for. This is a slippery slope for which it is very difficult to develop housing codes to protect the neighborhood character once a rezoning decision is made. I know that I’ll be accused of sensationalism, and to some extent I’ll accept it, however it’s hard to argue with the above facts.

I believe that our current zoning code is flexible enough as is to accomplish our growth objectives without requiring a wholesale change to single-family zoning. I’m not saying that it’s perfect, but I do think we can review our current footprint and make some strategic and surgically precise changes to increase our housing diversity. Planned growth, not leaving it to developers who have no vested interest in our community, other than to make a buck, leaving us with ad-hoc neighborhoods. One size does not fit all.

Unfortunately, this missing middle upzoning concept is gaining some traction within our city’s inner circles. A few on the planning board, a few councilmembers and obviously the city are starting to float the idea. They start by advocating for either detached accessory dwelling units or duplexes in all SFR neighborhoods. Neither of which adhere to our definition of single-family residential. So, they would need to change the definition (or eliminate SFR) in order to enact even these ideas. Make no mistake about it, this is the foothold that they are looking for to make even bigger changes in the future. Ground zero, so to speak.

I’m sure we’ll be revisiting this topic many times between now and the Comprehensive Plan update.  This letter is my attempt to be proactive and get out in front of this before their narrative takes further hold.  I believe this is a community decision, and not one left solely to a board or council.