The histories of five Edmonds early settlers were shared at the annual Walk Back in Time event Thursday. Each year, the cemetery board picks a theme and features five people buried at the Edmonds Cemetery and Columbarium who fit the theme. After extensive research, board members share what they’ve learned– dressed in costumes to portray each person. Approximately 30 attendees gathered to learn and honor the history of Edmonds and its former residents.

The event began with Cemetery Board Member Kerry Radley explaining how the event works, and this year’s theme of early settlers or pioneers.

“A lot of these people you’ll hear about today had a lot of influence on Edmonds in the early days and are still influencing this city now,” Radley said. 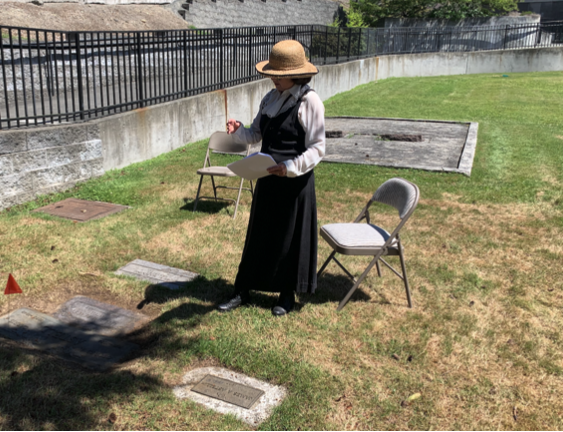 Kerry Radley portrayed Carrie Yost Astell, a member of the prominent Yost family. Carrie’s husband George arrived in Edmonds in 1900 after taking the railway from North Dakota. George then worked for the A.M. Yost company, which is where he met Carrie, the oldest Yost daughter. The Yost family arrived from the Midwest after their farm failed during a heat wave. The Yost family lived in a house on 6 ½ street, now called 6th and Pine. Carrie’s mother lived in the home until her death.

The history of the family was provided by the daughters of Carrie and George Yost. According to them, George loved horses and he would take friends for picnics in a horse-drawn wagon. Carrie was one of the official founders of the Church of Christian Science, which still has an office on Main Street. Many of George and Carrie’s children became very involved in Edmonds, one working for the Edmonds Tribune-Review and another becoming a councilmember.

Larry Vogel portrayed William Kingdon Jr., a timber worker who moved west and eventually became a notable grocer. Forced to retire from timber after he was injured in the 1890s, Kingdon then moved to Edmonds. His father, William Sr., came to Edmonds shortly after, and was the first person buried in the Edmonds cemetery. Kingdon opened a grocery store with his brother-in-law in 1901. The store eventually relocated to Main Street, and the building is now home to Chanterelle restaurant. Kingdon’s General Store was “the Amazon of its day,” said Vogel, and it provided the community with everything from clothes to groceries.

Assisting Vogel with the Kindgon’s history was William’s great-granddaughter Jill. According to Jill, there are five generations of William Kingdon’s relatives in the cemetery. Two of Jill’s great aunt’s, Esther and Ivy, lived in Edmonds until their late 90s and could name everyone in the photos Jill showed them. Interestingly, one of the Jill’sher aunts recalled that Sunset Avenue was once known as the red light district. Members of the Kingdon family can be found all around the cemetery; Jill’s parents, brother and grandparents are all buried there.

Joan Longstaff read an oral interview conducted at the museum with Ada Johnson LIaeger Mothershead and her granddaughter. The interview chronicles Mothershead’s childhood at the Indian Agency in Oregon. Her father was a blacksmith and her mother ran the boarding house where they lived. Longstaff explained how Mothershead witnessed conflict between the Native American tribes near her home.

The oral history detailed many of Mothershead’s fascinating stories, from a gunfight at her family’s saloon, to riding for 14 miles on horseback to get to a dance. Eventually Mothershead and her husband George divorced, and Ada moved to Edmonds, where she remarried. Mothershead passed away in Edmonds at age 93.

Tracy Little told the story of the Juhola family, who immigrated from Finland in 1902. The patriarch, Abraham, was the first to arrive in the U.S. after serving in the Russian army for five years. Abraham’s oldest son Jalmer was 17 when he first arrived in the U.S.. Jalmer eventually learned English, taught himself to farm and took up carpentry. After establishing his homestead, he wrote to his sweetheart Alma back in Finland and invited her to join him. Jalmer and Alma had seven children together and became U.S. citizens. Jalmer also founded an independent Finnish church.

In 1935, Jalmer and Alma moved to Alderwood Manor and Jalmer worked installing the area’s original water lines. He also got involved in the service station business, and worked at Boeing, the Seattle Cedar Shingle Mill, the Northwest Steel Rolling Mill and a grocery wholesale warehouse. He was employed at Crescent Manufacturing from 1946 to 1952, until he retired. Alma and Jalmer moved around Washington and Oregon– often staying with their daughter Linda, who’s also buried in the Edmonds Cemetery. Jalmer died in 1971 at age 86, and Alma died two years later– also at 86 years old.

During his first year participating in the event, Richard Marin portrayed Gustav Nielsen – a ship captain from Norway. Marin said he only had a few paragraphs of information on Nielsen, but he wanted to share Nielsen’s his story and fill in the gaps with his own experience at sea.

Records vary on Nielsen’s birth year. He was orphaned as a child, and there’s no information about how his parents died. Nielsen first went to sea at 18 and loved it. He then moved to Liverpool and became a captain. Marin described how Nielsen would likely have slept poorly on the ship, spending most of his time on deck in bad weather. He then moved to San Francisco in 1897, but came through Seattle and the Puget Sound during the Yukon gold rush. Marin presented photos of Edmonds at the time, showing what Nielsen likely saw on his journeys. In 1990, Nielsen left the shipping business, and in 1906 he and his wife Martha moved to Edmonds. Martha worked in the bakery downtown.

Marin also discussed his own experience sailing on the Constitution, and also sailing through a typhoon when he was 20 – revealing some of the difficulties Nielsen would have also faced in the 1800s.

Attendees left with five new stories, as well as a deeper appreciation for Edmonds’ history.

— Story and photos by Bridget Smith