The council also approved by a 4-2 vote (Councilmembers Diane Buckshnis and Laura Johnson opposed) a resolution supporting its prior decision to approve an interim extension of designated street fronts in certain areas of downtown Edmonds’ BD2 zone.

The council was required to hold a public hearing to determine whether the interim ordinance should be continued or repealed. The topic of extending designated street fronts is now before the Edmonds Planning Board, which will make its own recommendations to the council after studying the idea.

Todd Tatum comes to the City of Edmonds from Washington State Parks, where he served as business development manager and currently is the division manager for parks development. A U.S. Army veteran, he holds a master’s degree in business and a bachelor’s degree in finance. According to Human Resources Director Jessica Neill Hoyson, Tatum “has also worked closely with state legislators and municipal leaders on issues related to tourism and economic development.”

Tatum fills the position left vacant with the retirement of Patrick Doherty in December 2021.

The most meaty agenda item of the evening was the release of findings from a study completed by consultant Makers regarding Edmonds waterfront issues. In introducing the report to the council, Edmonds Development Director Susan McLaughlin noted the importance of the waterfront to Edmonds’ identity and stressed the need to develop “a waterfront vision” for the city.

The driving force behind the review was the Edmonds Crossing Project, which proposed to relocate the Edmonds ferry terminal to the south end of the waterfront. But Edmonds Crossing is not included in the Washington State Ferries 2040 Long Range Plan, which for decades was part of Edmonds’ long-range planning effort.

“Learning that the Edmonds Crossing Project is effectively canceled has a cascading effect on a number of assumptions on land use and transportation for the downtown waterfront and also affects some of the issues around the Edmonds Marsh,” said Soctt Bonjukian of Makers, who presented the study to the council Tuesday night.

“It’s critical that we roll a waterfront vision into the Comprehensive Plan,” McLaughlin said. 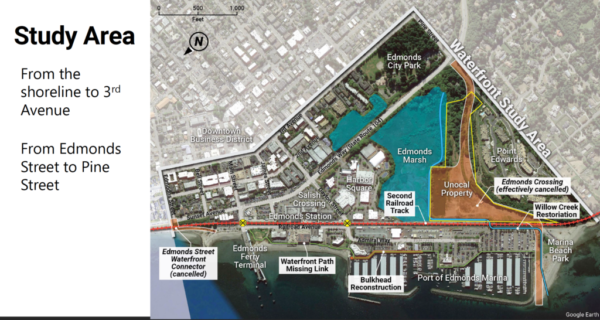 The study area covered the shoreline to 3rd Avenue and from Edmonds Street to Pine Street. The consultant held an online public meeting in October 2021, polling attendees on the issues of importance to them. The key priorities were:

– Enhancing the Edmonds Marsh as a wildlife reserve and avoiding development.

– Retaining the unique charm, character and natural features of the waterfront.

Among the top study recommendations:

– Create a new vision for the waterfront now that the Edmonds Crossing Project has been canceled. 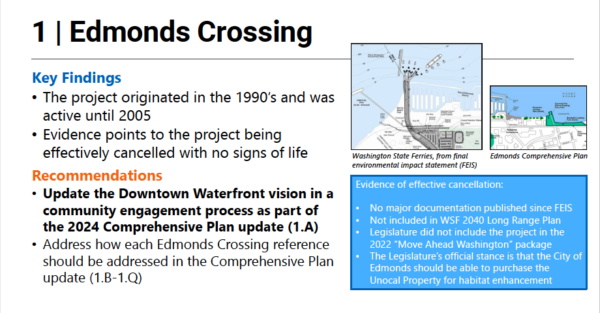 – Recognize and support the Edmonds ferry terminal’s current location. The state ferry system anticipates starting three-boat ferry service in the 2028-2041 time frame, and “it’s time to really start thinking about the implications of that,” Bonjukian said. “Their (the ferry system’s) assumption is they will run smaller boats more frequently, which could possibly have some effects on traffic patterns downtown.” The ferry lanes may also be reconfigured to accommodate a ferry reservation system, he added. A ferry traffic study should be conducted for current and projected traffic patterns, and the city should assess the impacts of the train crossing closures at Main and Dayton Streets, the study said.

– Prioritize Edmonds Marsh and Willow Creek restoration, both of which are related to the city’s eventual purchase of the Unocal property located next to the marsh. The Unocal property, a former bulk fuel terminal that closed in 1991, is now undergoing cleanup to remove contamination. The Washington State Department of Transportation will receive the title to the land once the cleanup is complete, and the state has given Edmonds the “right of first purchase at fair market value,” but that expires in June 2023 (although could be extended). The consultant recommends that the city retain an outside firm to perform a development feasibility assessment of the property, to determine its fair market value, 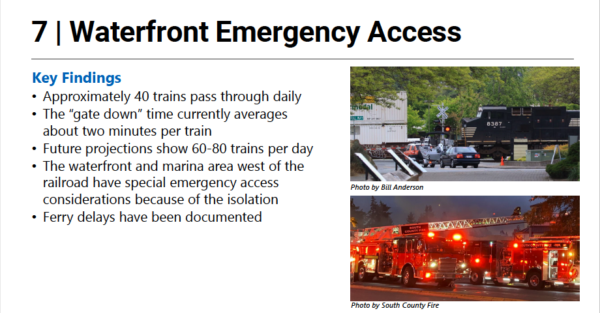 – Plan for improved emergency management of the waterfront. This issue was much discussed until 2019, when the city council voted to kill the controversial “waterfront connector” project that had been proposed to provide emergency access. However, the access issues remain, especially with increased train traffic now that the BNSF Railway plans to add a second track along the waterfront, starting in 2024. The consultants recommend revisiting the city’s 2016 Waterfront Access Study and considering construction of a fire facility on the west side of the railroad tracks or storing emergency equipment there, exploring an emergency vehicle overpass below Point Edwards to Admiral Way, and looking again at the idea of mid-block pedestrian overpass somewhere between Main and Dayton Streets. “We would suggest continuing to look at that option,” Bonjukian said, adding such an overpass “could be designed for a minimal footprint to reduce asethetic and cost concerns.

McLaughlin noted that the city is in the process of hiring a consultant to conduct a visioning and scoping exercise that will help guide the Comprehensive Plan update not only for the waterfront but citywide. “My hope is by the end of summer, we will be having visioning sessions throughout the city,” she said.

Councilmember Diane Buckshnis said she believes some important elements were left out of the study, and she suggested that a task force be formed to dive into those details. She also urged caution when revisiting issues related to emergency waterfront access, especially when it comes to environmental impacts.

McLaughlin said she agreed with Buckshnis that projects involving technical analysis were critical, but added she believes those need to come after the community develops a high-level vision for the waterfront.

Earlier in the meeting, during the public comment period, nearly every person offered some form of praise for Kristiana Johnson. “We’ve lost a hard-working, dedicated citizen and the Edmonds Marsh has lost a stalwart champion,” said resident Kathleen Sears. “Kristiana was a year behind me in Edmonds High School and one of things we shared was a lifelong love of the Edmonds Marsh.”

Noting that Johnson always put the citizens first, Edmonds Port Commissioner Jay Grant said that “a lot of us will obviously miss her but I think the community is going to miss her voice.”

“Kristiana loved Edmonds, she loved her city,” said resident Ken Reidy. “She worked really, really hard to support her constituents and she will be greatly, greatly missed. It’s a sad day for Edmonds.”

“Kristiana was never scared to confront anyone, whether a consultant (or) an expert, whenever she and probably most people in this room did not understand what they were talking about and force them to put things into terms that the majority of citizens of Edmonds could understand,” added resident Jenna Nand. “And I think that that’s a very valuable skill that we’re going to lose (not) having her as a councilmember. I’m going to miss her presence here in the council chambers.”

In other council business, an agenda item related to staff requests to either add new employees or change certain jobs from part-time to full-time roles was delayed to a future meeting, as was the continuation of Open Public Meetings Act (OPMA) training from a previous council retreat.