The Edmonds City Council at its Tuesday night meeting approved staff requests to add two new jobs and expand two positions from part-time to full-time roles. The council also repealed the city’s gun storage ordinance, which had been invalidated in April by the State Supreme Court, and finalized the application form and timeline for filling a vacant council seat.

The new full-time positions were related to responding to public records requests. One of the jobs, a public disclosure specialist located in the police department, will be responsible for reviewing police-worn body camera footage prior to public release. That position will join a second public disclosure position — already approved as part of the council’s 2022 budget. Adding those specialists means the police department can expand its pilot body-cam project, now involving 10 officers, to include all of the department’s 55 officers.

In stating the need for two positions, Bennett explained that during the pilot project, which began in December 2021, police discovered that it took about two and a half to five hours to review one hour of body cam video.

“To be perfectly frank, I’m worried two isn’t enough,” Bennett said. “I believe it’s a good start to see where we’re at.” It’s possible, she said, the department may need to add additional public disclosure positions later to handle public requests for the footage.

The council also approved Bennett’s request to expand the department’s half-time domestic violence coordinator to a full-time position. In her agenda memo to the council, Bennett noted that the city averages about 400 domestic violence calls per year, and added that in previous years, “our part-time DV advocate expressed frustration at the lack of dedication and resources toward DV and victim advocacy.”

After discussing and approving those three positions, the council then approved an ordinance that included all of them, plus a fourth request — not discussed Tuesday night — to expand the city’s .75 parking enforcement officer to a full-time position.

The total cost of all four positions for the remainder of the 2022 budget — assuming four months of employment — is $114,804 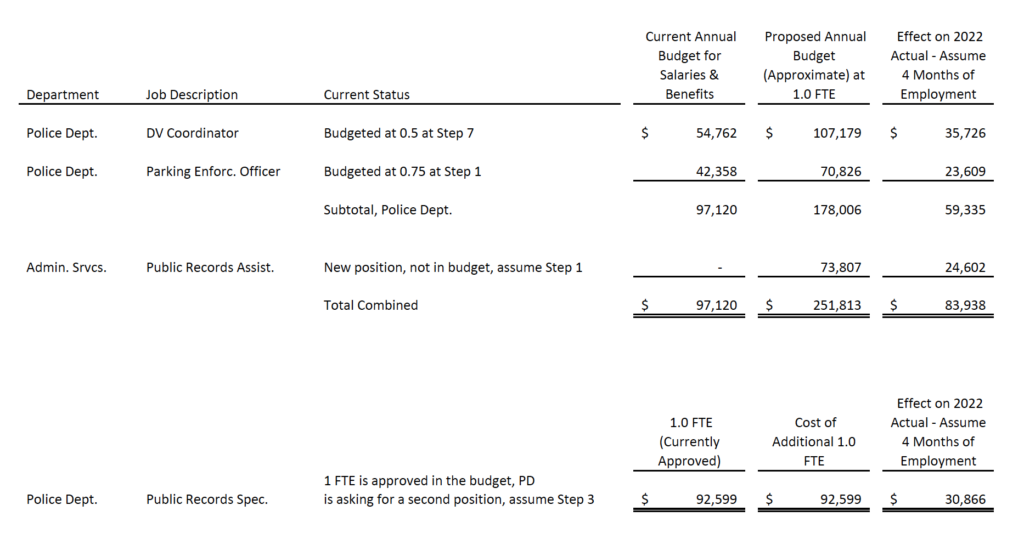 Regarding next steps for filling the Position 1 council seat left vacant with the July 18 death of Councilmember Kristiana Johnson, the council approved the application form that was used to fill a vacant seat in 2019. The council also set the following timeline:

– The application will be posted by July 29.

– Interviews are planned for Saturday, Aug. 27 with a possible council vote on Sept. 5.

The council also voted unanimously to repeal the city’s gun storage and unauthorized use ordinance, Proposed in July 2018 by then-City Council President Mike Nelson, the council’s passage of the ordinance set the stage for a flurry of legal actions, rulings and appeals pitting gun rights advocates against the city. Opponents maintained that the ordinance was illegal, in that it violated the Washington State Preemption Statute (RCW 9.41.290), which gives the state exclusive authority over firearms regulations statewide.

Councilmember Laura Johnson said that while she would vote to repeal the ordinance, she reiterated her disappointment that the city can’t require safe storage of firearms, noting that it saves lives.

In June, the city announced it was partnering with the Be SMART for Kids program, which educates adults on the importance of secure firearm storage. While Johnson acknowledged the importance of that city-initiated partnership, she said she was hopeful the council itself could do more to advocate for the issue, adding that she and Councilmember Susan Paine would be working on some ideas related to that.

– Received the annual report from the city’s development services department that included updates on projects — from townhomes to multifamily apartment complexes to commercial buildings — that are either proposed or underway, mostly along Highway 99 and Highway 104 and in the Edmonds Bowl. You can see the full presentation here.

– Awarded a construction contract for the 76th Overlay Project, a joint venture with the City of Lynnwood, to Granite Construction Company.

Staff believe that a number of factors contributed to the unexpectedly high bid for the overlay project, including inflation, a delay in advertising the project due to a lengthy Washington State Department of Transportation (WSDOT) review and an unseasonably wet and cold spring, which has compressed the timeline for paving work this year. In addition, WSDOT assigned the project an unusually high Disadvantage Business Enterprise (DBE) goal of 23%. That was a challenging goal to meet, English said, when those DBE firms are busy at this time of year.