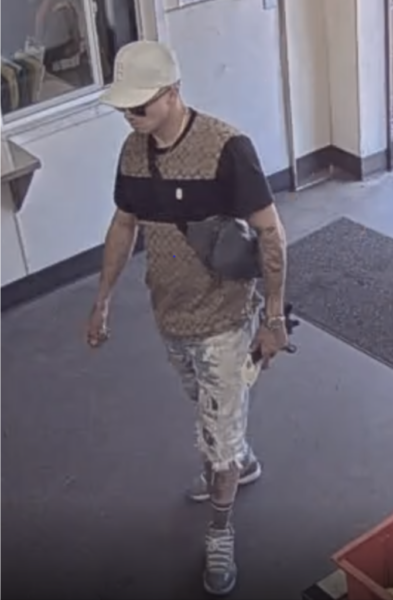 Lynnwood police have released the name and photos of a man suspected of exchanging gunfire with a Lynnwood police sergeant outside the Lynnwood Pick-n-Pull on Highway 99 Tuesday, then fleeing the scene in a black 2011 Jaguar XF.

Police identified the suspect as 26-year-old Lane Scott Phipps. He is described as 5 feet, 11 inches tall, 185 lbs, with blue eyes. Phipps is wanted for first-degree assault, felony harassment and additional crimes committed Tuesday at the Lynnwood Pick-n-Pull. He also has active warrants for his arrest, including attempted murder out of Whatcom County, and escape from community custody from the Washington State Department of Corrections, police said.

Phipps last seen driving a 2011 Jaguar XF, displaying a temporary tag #A5378260. He was armed with a black semi-automatic handgun.

The incident began Tuessay when a Lynnwood patrol officer identified a vehicle associated with Phipps parked in front of the Pick-n-Pull at 18306 Highway 99 in Lynnwood. The officer requested assistance to check the premises for the suspect, and several officers located him inside the Pick-n-Pull wrecking yard and attempted to detain him.

“Initial reports are that the suspect pulled out a handgun and put it to the head of a female he arrived with,” Lynnwood police spokesperson Commander Joe Dickinson said. “Officers attempted to negotiate with the suspect, who then fled toward the main parking lot where his vehicle was parked.”

According to police, a witness reported that as the suspect was climbing the fence, he fired at least one round and then a Lynnwood police sergeant returned fire. “The suspect made it to his vehicle, drove over the curbing, and fled the scene,” Dickinson said. There were no reported injuries to anyone involved.

Another patrol unit initiated a brief pursuit but was unable to maintain visual contact, he added. A witness later reported a similar vehicle in the area but did not immediately alert authorities.

If anyone has information on Phipps’ whereabouts, they should call Detective Sgt. Brian Jorgensen at 425-670-5632 or call 911. Do not approach the subject as he is considered armed and dangerous.