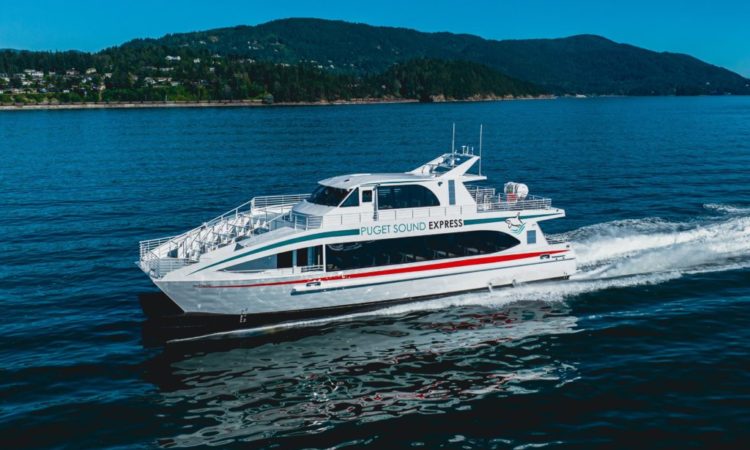 Whale-watching company Puget Sound Express has launched a new, custom-designed vessel – the M.V. Swiftsure – that will operate out of its Edmonds location.

Designed by Teknicraft and built by All American Marine, Inc. in Bellingham, the larger 77-foot Swiftsure was modeled after M.V. Saratoga, which was launched in spring 2018.

“Since the launch of Saratoga in 2018, we’ve been impressed that this design is an incredibly effective, and efficient whale-watch platform,” explained Puget Sound Express Operations Manager Christopher Hanke. “The combination of speed and efficiency with ample viewing space makes this a superior whale-watch vessel. We were pleased to be able to work again with All American Marine – their build quality and experience made them the natural partner to build a second vessel,” said Hanke.

According to a company press release, the 150-passenger, semi-displacement catamaran hull for this vessel was developed by Nic de Waal of Teknicraft Design in Auckland, New Zealand. The design integrates the signature Teknicraft symmetrical and asymmetrical combined hull shape, bow wave piercer, and an innovative, dynamic hydrofoil system. The hull design is complemented by Teknicraft’s signature integration of a wave piercer positioned between the catamaran sponsons to break up wave action and ensures reduced drag while enhancing passenger comfort. The vessel’s design offers all passengers a smooth ride and comfort as the hull provides a cushioned effect when encountering waves.

Swiftsure was designed from top to bottom for low fuel consumption at high speeds. The vessel utilizes four Hamilton Jet HJ364 water jets, complete with the Hamilton Jet control system. “We’ve done many years of research to develop a vessel design that’s particularly low-wake, due in large part to our unique hydrofoil system that doesn’t displace as much water and create waves as is the case with traditional hull design,” said designer Nic de Waal. The vessel’s water jet propulsion also makes the boat much quieter underwater than traditional, propeller-based designs.

With Swiftsure’s arrival in Edmonds, the Puget Sound Express’ 120-seat Saratoga vessel will operate out of the company’s Port Townsend location.