The one issue that generates the most intense discussion in Edmonds is housing. Residents and city officials have debated for years on issues related to how and where people should live — from housing density to homelessness to affordable housing —  and how much the city should help those who struggle to afford to live here. This is the second in a series of My Edmonds News reports on our housing debate and its human impacts. This time, we dig into the city’s new ‘no camping’ law. You can read Part 1 here.

“The Highway 99 corridor can be pretty unforgiving at times.”

I’m riding with Edmonds Police Sgt. Jason Robinson. For 10 years he worked the graveyard shift – 7 p.m. to 5 a.m. —  much of his patrol spent on the Highway 99 corridor and with people who are often this city’s most visible homeless. Others have briefly set up tents at a spot on Edmonds Way and at Five Corners —  those did not last long. Highway 99 is the “magnet,” Robinson said; lots of transients moving through, others trying to find a niche where they won’t be so visible.

In the back seat, as he always is, his partner, Hobbs, named for the character Roy Hobbs in the movie The Natural.

“What you have here is people are attracted here because it offers some sort of cover…” Robinson tells me. We’re circling the Burlington Coat Factory building on Highway 99.  It is also home to several other businesses, a classic car shop and a moving company.

That’s where we find this, under the overhang at Careful Movers on the backside of the Burlington building. “Yesterday, when I drove by this couch, there was somebody sleeping on it, and they were cuddled up in a blanket. And, so I thought, that’s fine. The blanket’s there now and all folded up nicely.”

Sgt. Robinson left the sleeping man; 24 hours later, he’s gone. Just across the back alley, there’s a separate vacant lot that once held a small camp; it is now gone. Edmonds police have not seen the tent camps or blue tarp shelters that have sprung up in Seattle, Tacoma, and some neighboring communities. Robinson tells me, based on his experience, he estimates that the number of people at any one time trying to live on the streets is fewer than 10. “That,” he adds, “might even be on the high side.” The City of Edmonds human services office agrees that at most, maybe 15 people could be “on the street.”

In May last year, police arrested one of those — a man we called “Charlie” — for camping out at the downtown library. When he refused to leave, they arrested him for trespassing. “Charlie” spent one night in jail, and the city helped him find permanent housing.

Later last year, a woman set up camp on a bench just off 76th Avenue West at the Interurban trailhead. She also refused to leave. Edmonds police did get her a brief stay at a motel, and the human services office eventually found her more intensive help. She has not been back.

Those two incidents spurred the city to debate a “no camping” on public property law this spring. It came after an emotional month-long debate and intense news coverage. 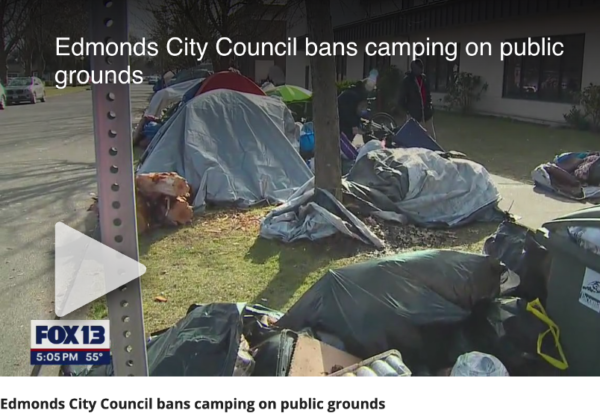 Some news coverage might have made you think that Edmonds was awash with homeless camp sites. This Q-13 TV story reported the no camping ban. But none of the video in the story was filmed in Edmonds.

In the Edmonds City Council discussions, which consumed most of the month of May, residents and councilmembers argued passionately. Edmonds resident Kate Sullivan warned the council that the ordinance “intimidates, it terrorizes, it says you are not wanted here, we don’t care about you, get out of my sight.”

“What is the whole point of this?” Councilmember Laura Johnson asked. “This is clearly, clearly targeted at those who are unhoused.” Johnson added, “We are talking about those among us who have the least… if you don’t have housing, what do you have?”

Everett and Lynnwood already had “no sit”and “no camping” laws on the books before Edmonds started its discussion. The Everett law prohibits sitting or lying in just one neighborhood, a 10-block section of the city, which had a large homeless encampment. At the same time, Everett opened a “tiny house” site to provide temporary housing for 30 chronically homeless people.

This April, Lynnwood City Council passed a law making camping illegal on any street, park, or public space. The Lynnwood ordinance also outlaws RVs as temporary living spaces in public areas. A conviction could result in a fine of up to $1,000 or up to 90 days in jail.

Edmonds‘ no camping law also carries the same penalties but provides that municipal court may order anyone who is unable to pay to instead perform “community service or work crew in lieu of a monetary penalty.”

Now that no camping is the law here, how will police enforce it?

“I don’t honestly think it will be much different than what we do now,”, Chief Michelle Bennett told me. “It’s not — you’re homeless or unhoused and now we’re going to arrest you — it’s you just can’t camp overnight.”

She told me about a group that recently tried to set up a tent near Lake Ballinger. Officers talked to the group, told them about services the city can provide and explained there’s no overnight camping. The group then “cleared out of the area,” she said.

Councilmembers Laura Johnson and Susan Paine were the two members who voted against adopting the no camping law. I asked for Paine’s thoughts now. She told me that she stood by her previous comments – that she is dismayed. Laura Johnson agreed to an interview, but we have not been able to connect in time for this article’s publication. The night the ordinance passed, Johnson said “this is a sad day for Edmonds.”

Chief Bennett insists that Edmonds officers are “compassionate and empathetic. I don’t foresee us doing very many arrests at all,” she said. “It’s not healthy to be out in the elements, and sometimes it’s a dangerous predicament to be in, and offering that help is really, really important.”

Bennett added, “if people don’t want it (the help), the government here has said, ‘that’s okay, you don’t have to take it, but you also don’t get to camp overnight here,’ which is what the community desires.”

The council debates and a U.S. Ninth Circuit Court of Appeals decision — left in place by the U.S. Supreme Court in 2019 without comment — put limits on what the city can do about removing people who camp on public property. That court ruling makes it unconstitutional for cities on the West Coast to arrest people for sleeping outside if there are no shelter beds available for them.

In the May 3 Edmonds City Council meeting, Councilmember Paine asked Bennett how officers would enforce the new law. They would, said Bennett, call a representative from the city’s human services department to assess the person’s need for services and try to assist them. If the person declines shelter, the person has the option to leave. “Any kind of charging or arrest would be an absolutely last resort,” she added.

But, a lack of shelter beds throughout the county may make it difficult for police to make arrests. There are no shelter beds in Edmonds, and a car park operated by an Edmonds church for those who are homeless can only accommodate five vehicles. Shelter beds in Snohomish County are often full; some with long waiting lists. In addition, the council unanimously passed an amendment stating that the shelters to which Edmonds could send people to must be within a 35-mile radius of city hall, to keep them close to local social services. As of now, there have been no arrests under the no camping law.

Sgt. Robinson is one of the officers who must walk the line between help and enforcement. He came to policing late in life; Robinson was a 38-year-old “rookie” who decided to give up a job with Nordstrom to find another outlet for the “passion and compassion” that he says drives him.

Robinson told me, “in some instances it may have come down to a moment in time where they (someone on the street) made one decision that set them down this trail; maybe addiction, maybe losing a job… whatever it may be that got them to this point, I feel for these people.”

Society, he added, sometimes doesn’t “want to acknowledge those people and just wants to drive by.” Among his goals is to see if he can help get people back on their feet, feel more confident and help restore their sense of humanity.

Robinson has used his city credit card, which all sergeants carry, several times to buy a night’s motel stay for a desperate person. The city also gets emergency money – about $7,000 – from the county for motel vouchers for temporary shelter.

In addition to offering shelter contact numbers and calling human services to help, each patrol car now carries a small comfort kit – hygiene items, some non-perishable food, perhaps some clothing for those who need it.

During his graveyard patrols, Robinson thought up a different approach. Using his own money, he’d buy a couple pizzas, stick them in a warming bag, buy new gym socks, and when he ran into someone homeless, would stop, talk and offer up a slice and a pair of socks.

“A pair of socks or some food, a bus ticket, a handshake or a fist bump, as simple as that sounds,” he told me, “they may not have had that in a long, long time.” He calls it a gesture of mutual respect.

“I’m certainly not alone when it comes to engaging with these people and we do it from a place of wanting to help and understand them,” he told me, “and not just from a place of — hey, I just want to run your name to see if you have a warrant.”

Edmonds’ no camping law was not designed to be the ultimate solution to homeless trying to live on the streets, or in other public spaces. It is one part, a clearly emotional part, of the decisions the city is making. The police department has promised the council to report on its enforcement every six months to try to judge its impact.

Jason Robinson wants the people of Edmonds to remember this; it’s what you can — and can’t — do about those who are homeless. “When people call 9-1-1,” he told me, “they’re looking for a ‘fix.’ When it comes to transients and being unhoused, and to mental illness, there rarely is a quick fix that will hold — we just try to mitigate and provide some resources.”