A sunny afternoon at Olympic Beach. Yes, it’s hot right now – for Edmonds – but the city just warned that in the next 25 years, projections show that summertime temperatures could be 7 degrees higher than we’re experiencing now. The issue – climate change and how we and our city are going to deal with it. 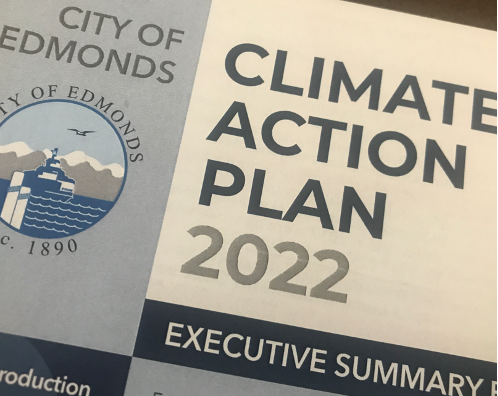 Talk about climate change and it sparks passion — whether you accept the threat of it or question the impact on our planet. There is very little we can do about the “big” global picture and that part of the debate.

But the state has already passed climate action goals and regulations that affect this city. And when Edmonds adopted a Climate Action Plan 12 years ago, it committed to “preventing the harms from climate change.”

The problem is that “the Edmonds community has not kept pace with its goals to reduce greenhouse gas emissions” – that quote is from the city’s 2022 summary of its Climate Action Plan.  The next sentence says it all: “To avert the worst harm from global climate change, we must achieve an even more ambitious rate of emissions reductions.”

An update to that plan is in the works. That’s what brought two dozen people to an open house Thursday at the Edmonds Waterfront Center, as Development Director Susan McLaughlin, staff and consultants asked the audience for feedback. After a second open house in August, a draft of the new plan will go to the city douncil for action this fall.

When attendees were asked what they thought were the biggest environmental issues around climate, people offered “fires,” “flooding,” “resource conflict” and “reducing natural gas.”

Most in the group embraced the concepts, but attendee Wally Danielson did not. “This is a horrible plan, natural gas has helped save the country,” he argued. “All you hear is an echo chamber of climate champions.”

McLaughlin insists the city wants the Climate Action Plan to “be pivotal,” but admits “we really haven’t made much headway even since 2010.”

In 2010, the city adopted that first Climate Action Plan. Prominent in it was this quote:

“If there’s no action before 2012, that’s too late. What we do in the next two to three years will determine our future. This is the defining moment.”

The “defining moment” has come and long gone, and Edmonds has a lot to do to meet its ambitious goal of carbon neutrality by 2050. McLaughlin told the open house that though the city is tracking progress, “if we adopt and implement all the actions, we still have a gap” in meeting the goal.

In a 2017 green house gas emission survey, the city found that two-thirds of emissions — totaling 500,000 metric tons, primarily carbon dioxide — are “imported.” That means they are generated outside Edmonds “to produce the goods, food and services” we consume.  Can’t do much about that, the city admits.

The remaining 250,000 tons of emissions are on us; homes and cars create 90% of that. One woman asked about the climate impact of “three-story condos.” McLaughlin responded that “the problem is more about single-family houses” — and their energy use — than commercial or condo buildings. Homes use 75% of the natural gas in the city and commercial buildings 25%.

In the 2022 climate plan,  the city call to action includes “new multi-family and commercial  buildings to be 100% electric by next year.” But it isn’t mandatory that new housing construction meet that goal, and the city can’t force existing homeowners to switch from gas to electricity. Since 2000, natural gas consumption in Edmonds has increased 25%, according to city figures

Emissions from cars, trucks and buses have increased 27% in the last 20 years. The city wants to reduce that: get more of us out of cars, encourage more electric and hybrid vehicles, encourage bike and scooter sharing programs, promote pedestrian improvements, coordinate with transit for more service.

What has the city done until now?

– Converts solids to a product Edmonds can sell, keeping it out of landfills.

– But PUD says Edmonds has not enrolled this year

There is a new section in the plan – Climate Equity. The city points out an imbalance in the way climate change affects different groups, especially those in what it now calls “frontline communities.” They include those with lower incomes who live in less-affluent housing and neighborhoods. Edmonds says residents in those communities often “live in denser settings, use transit, conserve energy and consume less.”

The city data shows people with incomes of $120,000 and up “produce green house gas emissions that are double those of households with income between $40,000 and $80,000.” But what the analysis does not say is that frontline communities aren’t living in dense settings, using transit and consuming less because they want to – but because they can’t afford it. We’re waiting for details on how the action plan might address that

On Earth Day, April 21, 2009, the Edmonds community began to tell its leaders what people wanted for the future. Based on that and other input, Edmonds put together what it called the draft of a “comprehensive action plan” in the summer of 2009.

“In the year 2050 we see… Edmonds is one of many flourishing communities in the Puget Sound region of Western Washington with our energy coming from nearly 100% renewable sources, our waste streams approaching zero, and nearly all our products and services obtained from sustainable sources. Our community continues to serve as our foundation; we are engaged citizens with strong neighborhood connections. We value our natural setting along the shores of Puget Sound”.

Next month, city planners will hold another climate action open house at Edmonds Lutheran Church. Later in the fall, it will unveil the “new” draft Climate Action Plan. It then goes to Edmonds City Council.

Twelve years ago, we penciled in our future. We set priorities, goals, action items. Twelve years later, it appears there is still so much more to do.