Recently an article in an Edmonds historical publication reported on a disastrous fire in November of 1938—a fire which destroyed Charles Cressey’s Garage and Service Station. However, the article erroneously gave the garage’s location as Seattle Heights, and stated: “Cressey’s was located near Highway 99, next to Albright’s Restaurant (former Harvey’s Tavern).” Correctly, in 1938, the actual locations for both Cressey’s Garage and Albright’s Café was not Seattle Heights; rather, the two businesses were located at a completely different intersection—a mile north of Seattle Heights.

Even though Charles Cressey’s home was in Edmonds, his automotive business was always in Lynnwood, before its incorporation.  Cressey’s Garage, Towing Service, and Texaco Service Station was situated on the northeast corner of the intersection of the Everett Highway and Edmonds/Alderwood Road (today’s Highway 99 and 196th Street). The garage was directly south of Albright’s Café, which opened in 1934. By the late 1930s, the local business people, as well as local newspapers, referred to this location as Evergreen Corners. Today, it is known as the Lynnwood Crossroads—a high-traffic intersection.

After the fire, Cressey’s Garage was rebuilt by the building’s owner, F. D. James, a Seattle real estate man, and reopened in late December of 1938, at its same Evergreen Corners location in Lynnwood.

In August of 1939, less than a year after the Cressey fire, Alby Albright did relocate his restaurant business to Seattle Heights and that is the building which later became the home of Harvey’s Tavern (aka Harvey’s Lounge)—until its recent closure. Albright’s Bungalow Café was located on the west side of the Seattle Heights intersection, just north of Adrian Middleton’s grocery store/service station and the Seattle Heights U.S. Post Office, which was housed in a back corner of the store.

Middleton’s Store was on the northwest corner of the intersection, directly across Highway 99 from Eisen’s Garage, which was on the northeast corner. The former site of Middleton’s Store is now occupied by a Jack in the Box. Old-time residents will most likely remember the Seattle Heights intersection at Highway 99 and 212th Street as Eisen’s Corner. Holmes Corner and today’s Edmonds-Woodway High School are one-half mile west.

Something to remember about this oft-times-confusing location is that in our day, the west side of the highway at the former Seattle Heights intersection is now part of Edmonds, and the east side is located in Lynnwood.

As my own personal contribution regarding this location, in 1938 our family home was located on the southwest corner of the Seattle Heights intersection (where the Edmonds Toyota dealership is today).

For further information explaining its origin and a bit of history of the former community of Seattle Heights, see my May 26, 2018 column Looking Back: The birth and evolution of Highway 99 in South Snohomish County.

Through the years, I have often written about the rather confusing place names from our past. To help clear up some location confusion, in an earlier Looking Back column I featured a few of these historic place names.  See my April 9, 2019 column, Looking Back: South Snohomish County place names from the past.

My next Looking Back column about Lynnwood history, Part 2, will highlight some of Lynnwood’s development during its Days of Progress. Part 3, a history of the Cressey family of Lynnwood and Edmonds, will follow the Days of Progress column. Both articles are previewed here. 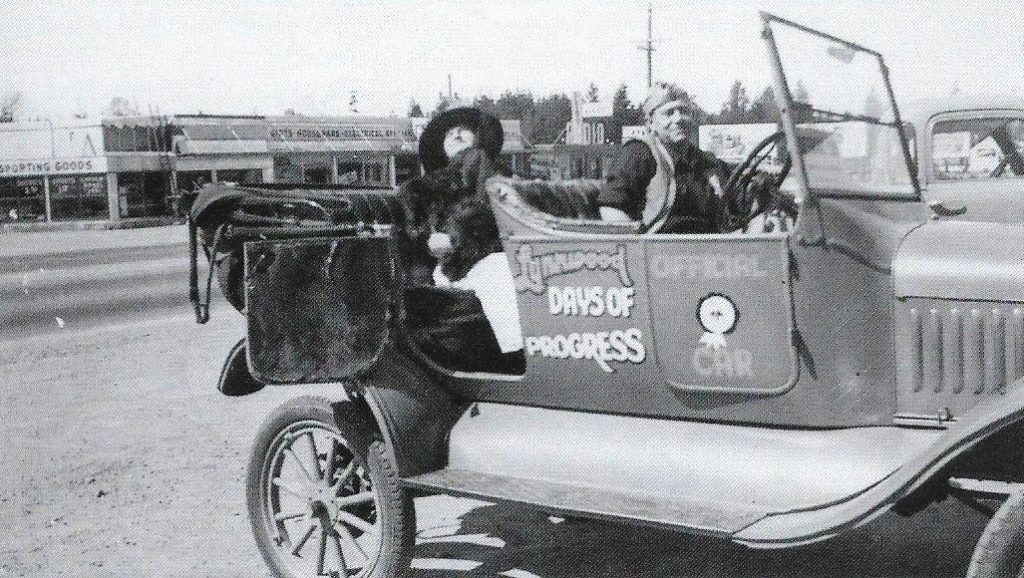 Pictured is the first Lynnwood Days of Progress Festival parade. The festival, which became an annual event, started as a joint project by the Lynnwood Commercial Club and Lynnwood’s Community Club to raise money for a park. Shown here, in the back seat of the Days of Progress official car, wearing her famous mink stole, is Marie Tutmark, a pioneer resident of Alderwood Manor and owner of Marie’s Floral Shop in Lynnwood. The driver at the wheel of the vintage car is my father, Walter A. Deebach, Sr., a longtime Edmonds resident and an avid and versatile supporter of numerous south county events and organizations. The car is parked at Highway 99 and 196th Street—which is considered as the historic center of Lynnwood.

The first Days of Progress festival was held in 1951 and included events such as a street dance and a baby-photograph contest. By the time Lynnwood incorporated in 1959, the Days of Progress festival had been replaced by the more up-to-date Lynn-O-Rama event, which continued for many years.  Source: Lynnwood-Alderwood Manor Heritage Association (LAMHA) and its book: Images of America, Alderwood Manor by Marie Little, Kevin Stadler and the Alderwood Manor Heritage Association (2006).

In its Special Progress Edition for July 30, 1953, The Reporter, a former Lynnwood newspaper, featured a photo of the Cressey family together with a small description of the family’s contribution to local history:

“A FIRST FAMILY OF LYNNWOOD . . . the first bride and groom in Lynnwood, the first two children born in Lynnwood, and the builder of the first sidewalk in Lynnwood. All of these firsts bring us to Lew Cressey and his family pictured here. Mr. Cressey came to this territory with his logging operations in 1907. He soon married a neighbor, Ruth A. Beager, the daughter of an earlier pioneer, and they made their home on the Edmonds-Lynnwood Road.” Three children were born to them—Charles, Rachel and Thelma.

Betty Gaeng is a former long-time resident of Lynnwood and Edmonds, coming to the area in 1933. Although now living in Anchorage, she occasionally writes about the history and the people of early-day Lynnwood, Edmonds and Mountlake Terrace. She is also an honorary member of the Edmonds Cemetery Board.