More free summer concerts are in store this week with upcoming performances set for Tuesday, Aug. 16 and Thursday, Aug. 18 at Hazel Miller Plaza, as well as Sunday, Aug. 21 at City Park.

The concert on Tuesday, from 4:30 to 6 p.m. at Hazel Miller Plaza (5th Avenue South and Maple Street), will feature P.O. BOXX and Po Leapai. Sounds include R&B, reggae and hip hop but the common denominator is soul. Leapai’s musical background stems from a family of musicians. His production credits include three solo albums and two compilation albums. He has toured with Seattle reggae band Two Story Zori and Seattle soul band Peacemaker Nation.

Hazel Miller Plaza will again be the venue for a concert on Thursday, Aug. 18 from 4:30 to 6 p.m., featuring Elnah Jordan Experience Blues & Jazz.  Elnah’s musical path winded its way through the choir stands of her gospel roots to San Francisco’s clubs (where she was nominated in 1986 for Vocalist of the Year), and eventually to musical theater. She performed in the theatrical production of “Evolution of the Blues” as the legendary Bessie Smith, and her performance in the Off-Broadway production of “Street Dreams” landed her the prestigious Cabaret Gold Award. 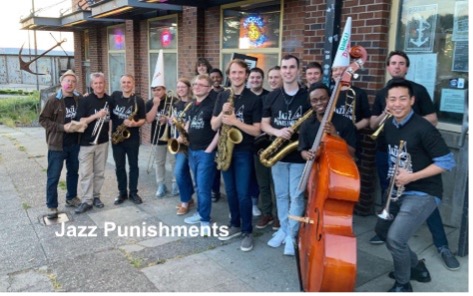 On Aug. 21 from 3-4 p.m., the Summer Concerts at City Park (600 3rd Ave. S.) come to a close with a performance by Jazz Punishments Big Band, led by Edmonds’ own Jake Bergevin. The band features young musicians from the Northwest jazz scene that are carrying the torch for the legacy of the Big Band jazz tradition. Featuring alumni of the Edmonds-Woodway HS Jazz program, including Max Bennett (saxophone), Jack Hillman (trombone), and Christine Hannan Eisenmenger (trumpet and vocals).

The Edmonds Arts Commission presents a summer of free concerts in the park on most Sunday afternoons in City Park, and Tuesday and Thursday evenings in Hazel Miller Plaza through Aug. 25. The series offers something for all ages and musical tastes. The 2022 Summer Concerts sponsors are Lynnwood Honda, Carter Acura of Lynnwood and The Hazel Miller Foundation.

For a complete calendar of all upcoming concerts, visit https://tinyurl.com/EdmondsConcerts.