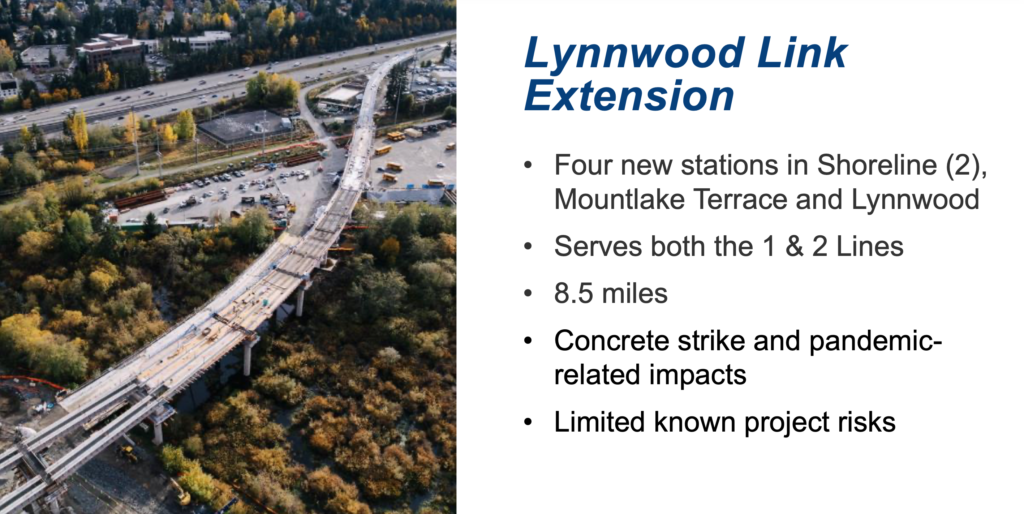 Sound Transit is continuing its efforts to identify new opening dates for current Link light rail construction projects, with four- to six-month construction delays possible for both the Lynnwood and Redmond projects. The projects were previously scheduled for completion mid-2024.

Since April of this year, Sound Transit has been flagging delays affecting East Link, Lynnwood, Federal Way and Downtown Redmond Link extensions, the agency said in a Thursday press release. These delays are based on “current issues and trends that are global in nature and others that are local and project specific,” including a recent concrete strike.

While continuing work is required to identify new project opening timelines, based on the most recent assessments, completion of construction for the Lynnwood and Redmond projects, previously scheduled for mid-2024, may be impacted by four to six months, only slightly exceeding the more than four-month delay caused by the concrete delivery strike that ended in April, the agency said.

The 8.5-mile Lynnwood Link extension runs north from Northgate to Lynnwood, with two stops in Shoreline and one stop each in Mountlake Terrace and Lynnwood.

The Federal Way Link Extension faces an unexpected ground instability issue that has the potential to require redesigning a segment in Kent adjacent to I-5 and South 259th Place, Sound Transit said. While it is too early to accurately assess the resulting construction delay, the agency now expects project completion to extend some number of months into 2025 rather than occurring in late 2024. On East Link, ongoing work to address construction challenges is projected to delay the project by at least a year beyond the previously scheduled mid-2023 opening.

“Within about the next four years, our carbon- and congestion-free light rail system will more than double from 26 to 62 miles and from 25 to 50 stations,” said Sound Transit Interim CEO Brooke Belman. “While we are on a path to fully resolve impacts of COVID-19, the concrete delivery strike and our construction challenges, we have more work to do before we can reliably establish opening dates. We will work tirelessly with our contractors to complete these extensions as rapidly as possible without compromising on safety or quality.”

A Thursday update to the Sound Transit Board’s System Expansion Committee summarized construction challenges in detail. On East Link, the biggest challenges involve construction quality and durability concerns about plinths, or raised concrete structures, that support the tracks in key sections of the alignment.

On both the east and west sides of the I-90 floating bridge, the contractor’s work to fix problems with cast-in-place concrete plinths supporting the tracks has led to the identification of further challenges. These include issues with mortar pads, rebar placements and track fasteners, which the contractor has agreed to fix by re-casting the plinths to ensure the long-term reliability and safety of the extension.

The agency said it has also been closely analyzing concerns related to pre-cast concrete blocks supporting the tracks on the bridge itself. Fortunately, a forensic engineering firm’s preliminary investigation results during July and August indicate the blocks do not need to be replaced.

On the Federal Way Link Extension, the previously mentioned ground stability issue involves a slope adjacent to I-5 that recently experienced a localized failure. On July 19, approximately 200 linear feet of embankment slid downslope by approximately nine feet, requiring a roughly three-day precautionary lane closure on southbound I-5. The slope has been temporarily stabilized, and Sound Transit and its design-build contractor are working with the Washington State Department of Transportation on permanent design solutions that will address a liquifiable layer of soil that has been identified fairly deep below the light rail alignment. Work to identify solutions will remain focused on minimizing delay to the project.

Work is moving forward in two areas to support updating opening timeframes for the projects:

Action plans responding to project challenges are summarized in a presentation provided at Thursday’s meeting and a detailed memo.