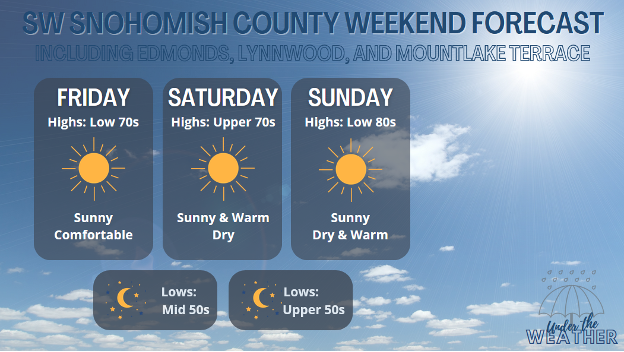 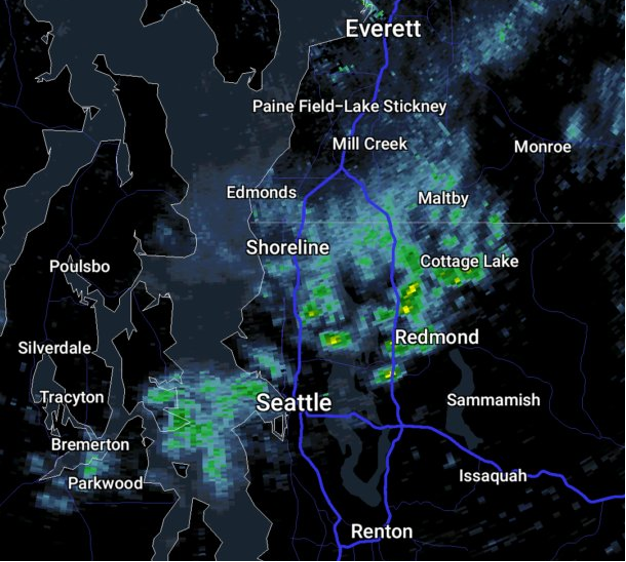 It is! After a 16-day hiatus from measurable rainfall at Paine Field, we finally received some rain on Thursday Aug. 4 —and boy, did it feel nice. At the time of writing this, the temperature outside at KPAE is sitting pretty at around 60 degrees. This feels quite refreshing after what seemed like a never-ending stretch of hot weather.

In last week’s article, I wrote about the warm overnight temperatures and that we had the possibility of breaking a record for number of consecutive days with overnight lows greater than 60 degrees. Well, we did it. Check out the table below. 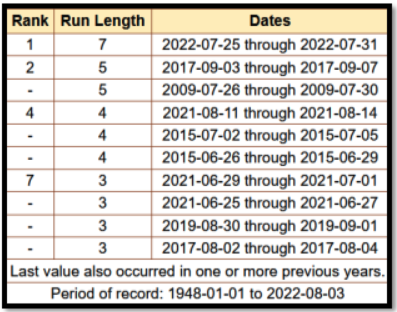 Six days would have ranked number one, but we eked out another warm night, putting the grand total at seven days—an entire week of very uncomfortable sleeping weather without any form of air conditioning.

As is no surprise to everyone, the daytime temperatures were also quite warm. In fact, we also set a record for the number of consecutive days with a high temperature above 85 degrees at KPAE, as shown in the following table. 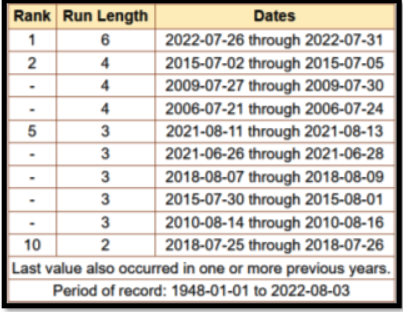 After such a prolonged heat event, the highs in the low 70s that we’ve had the past couple days are much appreciated. But, ready or not, the warm weather is coming again.

An upper level trough was responsible for the brief bout of rain Thursday morning. Another weak trough is expected Friday, but besides some morning clouds, the sunny weather returns. Friday is a sort of “transition day,” with high temperatures that don’t quite qualify as “hot” but with the sun still out. Highs should fall in the comfortable range, in the low-to-mid 70s.

Temperatures start to warm back up by Saturday, with highs possibly reaching the 80s yet again. Sunday is expected to be slightly warmer than Saturday. The workweek starts off warm with highs in the 80s on Monday but cools down a bit by Tuesday and Wednesday. There is a slight chance of a few scattered showers by midweek, as well.

By this point, it should be no surprise that we’re in the midst of our warmest and driest time of the year. It’s the time of year that we can use as an example to show people who don’t live here that it doesn’t actually rain all year in Seattle (maybe just nine months of the year). While it can definitely be uncomfortable at times (everyone without AC say “amen”), if you enjoy the sun, count your blessings—the warm, sunny weather doesn’t stick around forever.