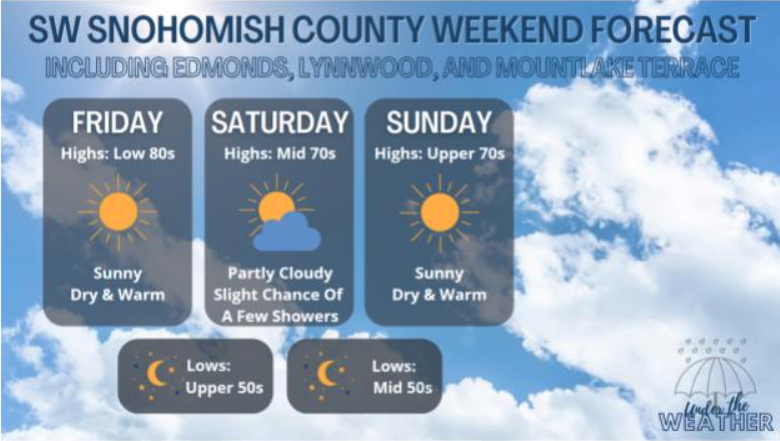 It’s a sobering thought to think that August is already almost halfway over. With all the heat we’ve had lately, it honestly feels like it’s been summer forever. Believe it or not, we’ve actually passed the climatological peak of temperatures for the summer. Take a look at the graphic below.

Using data from 1991-2020, the highest average max temperature is just under 75 degrees, statistically occurring at the beginning of August. Notice the gradual decline of temperatures starting the first couple days of August. This is an interesting thing to note but doesn’t necessarily mean it’s going to start getting cooler. While this is the general pattern using averages, the actual temperatures on a given year may vary from this trend.

And, at this time, models are not showing any indication of things cooling down long-term.

The system responsible for Wednesday’s thunderstorms (those in Edmonds look like they got quite the show—I’m a little jealous) is expected to make its way out of the area throughout the day on Friday and into Saturday. Temperatures on Friday are expected to be on the warm side, with highs in the upper 70s to low 80s.

As the upper low exits the region on Saturday, temperatures are expected to slightly decrease, with highs in the mid-70s (I know, not much of a “cool-down”). In fact, some models are suggesting that we could see a few isolated showers early on Saturday. Any clouds and showers that do happen are expected to clear up by the latter part of the day.

Temperatures are expected to bounce back up on Sunday with highs primarily in the upper 70s. The increase in temperatures will likely continue throughout the next week, with another possible heatwave on tap. Take a look at the graphic put out by the Climate Prediction Center: 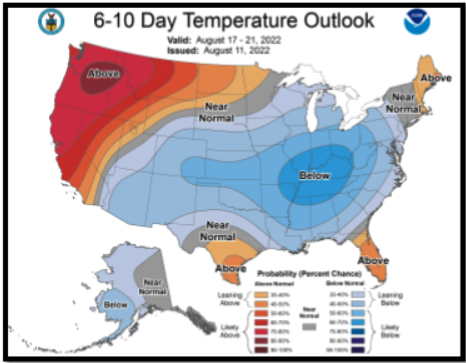 For the latter part of next week (Wednesday through next Sunday), there is an 80-90% chance of above-normal temperatures—I’d say that’s a pretty solid chance. How warm it may get is not fully known at this time, but I recommend paying attention to any updates given by the National Weather Service. Regardless, it’s good to be prepared for the possibility of another bout of heat, especially if you or your loved ones are sensitive to it.