You might think you’ve heard this story before. But not this twist.

A local city has crime problems at a motel – drugs, domestic violence, trespass, assault – and the city can’t seem to find a way to get the motel to clean out the bad actors and make their place safer.

No, it is not the story of the Edmonds Emerald Best Motel on Highway 99 that frustrated Edmonds police late in 2021. At that time, Edmonds police told us the motel and the area around it was the site of a crime wave with “the most violence we have ever seen.” There were 110 police calls in four months; among them at least five gun-involved incidents; two people wounded; arrests for drugs, felony warrants and stolen cars – connected to people staying or visiting the motel.

This time, it’s Mountlake Terrace that has struggled with similar crime in and around the Studio 6 hotel, on Van Ry Boulevard, across the street from the Regal Cinebarre theaters. But police experience there could help make neighboring cities safer.

Mountlake Terrace Police Commander Pat Lowe said that crime in and around the 119-room hotel “has been a problem for years.” 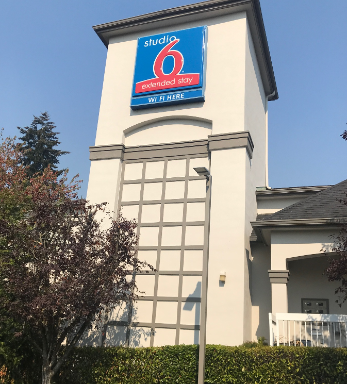 Potentially, the most dangerous situation at the Studio 6 happened the night of March 25. Officers found a man slumped behind the wheel of a pickup truck. They used two cruisers to pin in the truck in case the driver tried to speed off.  When they roused him, the report says the driver rammed the cop cars, then raced to the end of the parking lot, hitting three other vehicles, and tried to run through two blocking police cars. They arrested him. One officer had minor injuries. Cops found a half pound of suspected fentanyl, more than 300 other pills, heroin and cash. Commander Lowe said the city has had a lot of drug activity in and around the hotel for “probably 20 years… It’s been kind of a roller coaster with Studio 6 for a number of years.” He added that the suspect arrested in March is lucky; in that situation, officers could have been justified in firing their weapons.

During a Mountlake Terrace City Council meeting Sept. 6, Councilmember Laura Sonmore questioned Police Chief Pete Caw about that March incident. “The way I see it is, that area is costing our city quite a bit of money, quite a bit of time and putting our officers in danger,” she said. Caw agreed and told the council that the city was moving aggressively to get Studio 6 to make changes to improve safety and reduce crime. Caw mentioned that the city, which was talking with the hotel, had threatened abatement action on the property and “that seemed to get people moving in the right direction.”

In July, police command staff, city code enforcement officers and the city attorney met with Studio 6 regional managers. Commander Lowe said that “they (Studio 6) are very, very interested in working with us.”

That cooperation comes at a critical time for the hotel and the city.

There is a new urgency to make the area safer since it is the center of a huge development. Just a block from Studio 6, the Terrace Station complex is already partially occupied by apartment tenants and commercial customers. When construction is complete, it will add 600 apartments and 80,000 square feet of retail space. The Mountlake Terrace light rail station is set to open in 2024, part of Sound Transit’s Lynnwood Link rail extension from Northgate.

Things may have also changed more quickly because of a new city law. This spring the Mountlake Terrace City Council approved adding  a chronic nuisance chapter to city code. It allows Mountlake Terrace to take action against properties that already have received multiple violation citations within a set period of time. It gives the city more enforcement powers for violations that occur on the property. The new law also gives the city more clout, without having to go through the long, involved process of seeking abatement, or seizure, of the property.

The City of Edmonds does not have a chronic nuisance chapter in its city code. Both Edmonds police and City Code officer Dan Gooding tell us they are not aware of any such regulation.

The changes in Mountlake Terrace also come as Studio 6 has new owners, a local group that manages other hotels. The city code department says with the new chronic nuisance law, Studio 6 has agreed that the hotel will now “require photo identification and credit card information for future room rentals (rather than accepting cash payments without identification).” Studio 6 Manager, Laura Peckinpaugh said that customers must also pay a security deposit only by credit card and that credit card must be only in the customer’s name.

“It helps weed out a certain type of clientele,” she added, “and holds people accountable for their actions.” Commander Lowe told me that just changing the way guests pay, “would solve probably half the problems” that police have.

In July, city code employees met with Studio 6 to get the hotel to clean up trash, cut back trees to improve lighting and put up a stronger fence in some areas to keep out trespassers. They also instituted parking passes for guests only.Peckinpaugh told me it is already a “little quieter around the building.” She added that the “city was very kind” and that it was good to have a second set of eyes to point out what needed to be done.

Everyone one we spoke with believes the newfound cooperation, and the changes in law and in attitude, should help clean up the area around the hotel and make adjacent neighborhoods safer. But they all caution that it will be  some time before they can know for certain. Mountlake Terrace has a lot riding on the outcome.