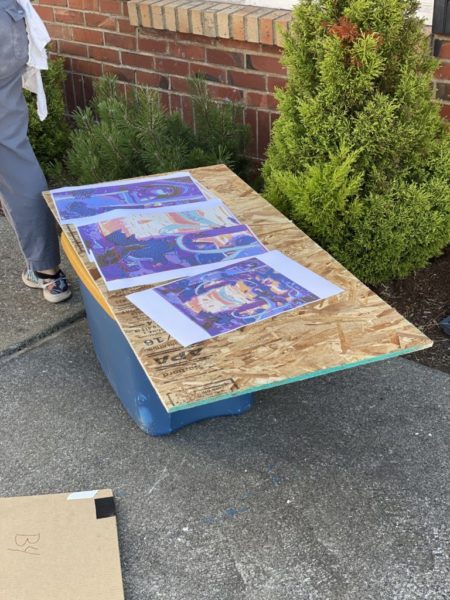 For so many who call Edmonds home, it feels like the perfect storybook setting. Mural Project Edmonds said this emotion is illustrated quite literally in its newest mural, located on the south-facing wall of 114 4th Ave. N.

According to a Mural Project Edmonds announcement, muralist A.J. Power is painting “Returning Home,” a storybook scene that captures the idea of Edmonds as a welcoming community that you’ll want to return to over and over again.

“I’m so proud that Crow is the site for the next mural in Edmonds!” said Crow owner Jen Lawson. “A.J.’s whimsical design will energize the block and be the perfect addition to the 4th Avenue Arts Corridor.”

Power said: “I am honored to be a part of this project and make a contribution to the aesthetics of a historic and often visited city. Edmonds has a unique identity, and I want the mural to honor that community spirit.”

As both the author of children’s books and painter of anthropomorphic animals, Power has experience in creating fairy tale worlds. He has been perfecting the design of the mural over the past few months.

“I invite people to visually read the image. There are visual cues around the painting that allude to universal narratives: The father teaching his children, the traveler returning home, the matriarch watching over all,” explained Power. “There are also historical narratives: The two oxen whose names were included as signatories to help Edmonds to register as a city, and the many cedar shake roofs that refer back to the shingle factories. I love narrative illustrations that ask the viewer to interpret the scene. If the visual cues are left open enough, then the viewer can provide their own reading and interpret their own story.”

Mural Project Edmonds, a committee of Art Walk Edmonds, has been responsible for new murals in downtown Edmonds for the past few years. The overall goal is to bring professional-level, well-planned artistry to the community and to fit appropriately into the chosen space.

Other mural projects in the works include those the new Main Street Commons, which are nearly finalized to be painted and installed later in the year. Mural Project Edmonds is also scouting out a location for next year’s mural project: a tribute to essential workers in our community.

Funds for new murals are raised primarily through downtown Edmonds Summer Wine Walks, which are hosted by Art Walk Edmonds twice each summer. Donations, grants and sponsorships also help with the costs.