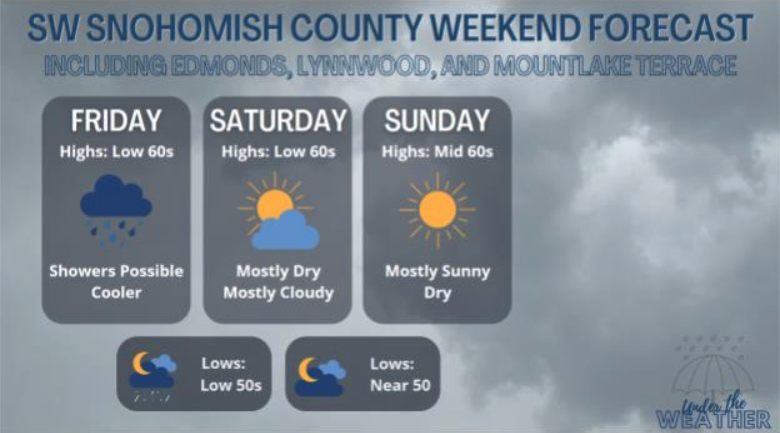 Many of us were likely hoping that we could actually get through the summer months without having a smoke event. Unfortunately, that did not happen this year.

Wildfire smoke from the north Cascades began pouring into western Washington by last Friday, which began reducing air quality. For our neck of the woods, this wasn’t anything too significant. However, we were thrown a curveball—one you can never truly predict. A new fire, called the Bolt Creek Fire, started early Saturday morning near the Skykomish area and due to the winds, it quickly spread. The fire began prompting numerous evacuations for people in the area.

Smoke began pouring into our area due to the strong easterly winds, and the air quality took a hit. Some locations saw air quality reach the unhealthy to downright hazardous categories of the Air Quality Index. Below shows a graph depicting the AQI history for Lake Forest Park, with the corresponding color scale.

As a comparison, here’s the same graph for Index:

As you can see, we did not get the worst of the smoke/air quality. To get a visualization of the areas that have been burned, check out this video from KING 5 News.

We began seeing an improvement on Sunday as winds shifted directions, but unfortunately that meant areas like Leavenworth and Wenatchee began seeing poorer air quality. Below shows the recent AQI history for Leavenworth.

As of Sept. 15, the estimated size of the fire was 9,440 acres and it was at an estimated 5% containment. You can read more about the fire here.

I want to take a brief moment to say thank you to all the firefighters and other people working hard to save lives and property. We all appreciate your hard work!

Thankfully, this looks to be one of the last (if not the last) bouts of smoke we will have this year (fingers crossed!). Forecasts are indicating that we should be expecting more fall-like in the coming days, and after the heat and smoke last weekend, I’m sure most people will gladly welcome that.

An upper-level trough is expected to be the dominating weather feature this weekend, which begins taking shape on Friday. This will help to usher in some cooler air and some moisture. There is the chance for some showers at times on Friday, but it isn’t looking to amount to much. The chance for showers sticks around for the overnight hours. We should dry up by Saturday, but it’s still expected to be mostly cloudy, with the possibility of a few sun breaks.

The biggest shock may come from the cooler temperatures expected. Highs for Friday and Saturday will only be in the low 60s, the coolest high temperatures we’ve seen since July 3. This is about a 20-degree difference from last weekend’s highs.

Sunday is expected to be mostly sunny and should warm up slightly with highs in the mid-to-upper 60s. The first half of next week is looking pretty similar to Sunday, with mostly sunny skies and highs in the upper 60s to low 70s.

You might actually have to break out some jackets this weekend, especially at night. If you ask me, it’s about time—after all the heat this summer, I’m ready for some cooler temperatures, and I’m sure I’m not the only one.