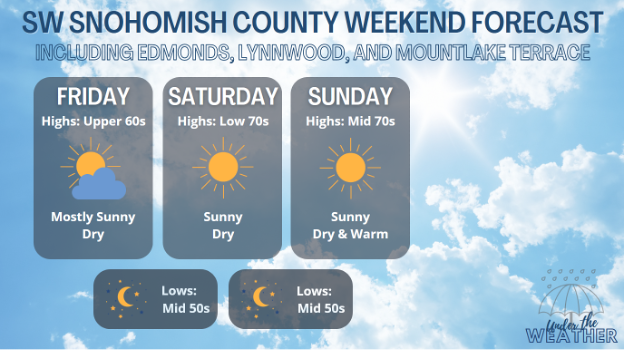 We finally had some rain this week. I’m not going to lie; I was pretty happy to see the cloudy skies and showery weather. When all was said and done, we received a whopping — drum roll please — hundredth of an inch of rain. Yawn. That brings our total of rainfall to just 0.31 inches since July 1 at Paine Field (the normal is 3.43 inches for the same period). I’m glad it happened, don’t get me wrong — but I would personally prefer a bit more than that (maybe I’m the only one). Take a look at the following graphic:

This graph shows the number of days with measurable rainfall (0.01 inches or more) during the month of September for each year since 1998. As you can see, September 2022 has seen the lowest number of days with measurable rainfall during this time frame — a total of just two days. We can also look at the total precipitation for each September, which can be seen below.

It should be no surprise that we’ve seen the lowest amount of rainfall in a September in over 20 years (an amount of just 0.07 inches). Compare this year’s total with last year’s whopping 3.96 inches. That’s quite the stark contrast.

Whether you are like me and want the rain to come back or need time to mentally prepare for its return, most of you are probably wondering when we’ll see an actual rain event again. Well, I hate to break it to you, but it won’t be for a while. In fact, it’s highly likely that we won’t see any rain for the next week or so.

As we head into the weekend, not only is it supposed to be dry, but the sun will be out and about yet again, with daily record highs possible for several days. Summer really just doesn’t want to let go yet.

In the graphic below, we see our temperatures for the month of September so far (blue bars), along with the normal range (brown), the record lows (light blue), and the record highs (red). As you can see, a couple record daily highs have been set for Paine Field, denoted by when the top of the blue bar touches the red line.

Friday is expected to see highs in the upper 60s, which is slightly above average. But as we hit Saturday and Sunday, highs will likely be in the low to mid 70s. The current daily record highs for Oct. 1 and 2 at KPAE are 74 and 72 degrees, respectively, which could be threatened with forecasted highs this weekend. In fact, the possibility of setting new daily record highs continues as we start the week, with forecasted highs for the first half of the week in the low to mid 70s.

As we head into the month of October, the likelihood of 70-degree days decreases. Since 1998, only 10 years have seen an October 70-degree day and only five years have had more than one, which can be seen below. By this time next week, we could be tied with 2014, all within the first five days of the month.

The reason for the warm and dry weather this weekend is an upper level ridge over our area. But this ridge is special. Take a look at the model depiction of the 500 mb heights for Saturday morning. 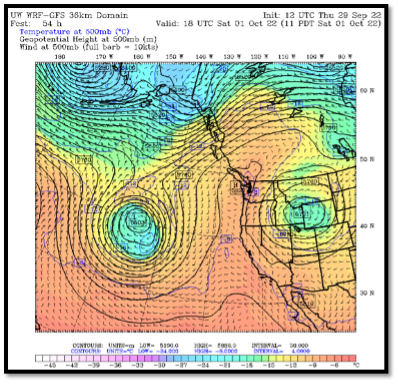 Notice the two cut-off upper-level lows on either side of the ridge. This special arrangement of the ridge and troughs is called an omega block, after the Greek letter omega (Ω). Can you see it? 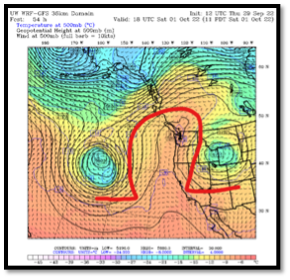 This acts as a blocking pattern (hence, omega block), meaning that weather can stagnate for a longer period of time. Areas that fall under the omega often see days with drier weather, whereas areas on either side of the omega block see rainier weather. In the images above, look where we are — right under the omega. This shape is expected to stick around through early Monday (according to the UW WRF-GFS model), but a ridge reforms afterward, which helps to keep us warm and dry, even after the omega block breaks down.

At this time, both the European and GFS (i.e., American) ensembles are suggesting that we could stay dry through the end of next week. There is still the chance that this could change, especially towards the second half of the week, but at this point, things aren’t looking super promising if you’re hoping for some significant rain like me.

Regardless, it will be comfortable weather, which will be enjoyable if you’re planning any outdoor activities this weekend, such as going to a pumpkin patch or farm. It is almost October, after all — it’s not every day you can pick out your Halloween pumpkins and enjoy fall festivities in 70-degree weather.