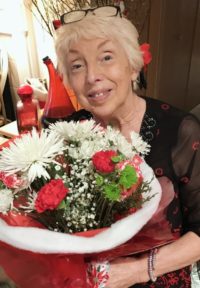 Joan grew up in Richmond Beach, WA where she attended Shoreline High School and the University of Washington, where she met her former husband, Doug Middendorf. They settled in Edmonds, WA where they raised their four children. Joan (affectionately called “the Joaner” by her children’s friends) was actively involved in her children & grandchildren’s lives. A legendary mom, she could often be found making super nachos, lemonade, and chocolate chip cookies for half the neighborhood, shuttling multiple kids and friends to sporting events, and tirelessly proofreading term papers & helping with school projects. The house on Talbot Road was always full of her kids and their friends and she offered endless help to anyone who needed it. Planning fantastic birthday parties and elaborate holiday celebrations brought her great joy and she was often filling her house to celebrate her loved ones.

Joan was a sales representative in the Home Furnishings Industry covering the territories of Washington & Oregon. She enjoyed travelling and working with her many accounts and made friends wherever she went. Her sense of style and elegance were evident to all that met her.

After retirement, she especially enjoyed spending time with her grandchildren. She could often be found at their various sporting events decked out in their school colors. She also loved gambling the slot machines in Las Vegas, trout fishing at Spectacle Lake, cheering on the Seattle Mariners, and having clam chowder at the Edmonds Beach.

She was preceded in death by her son, John Middendorf, her parents, George & Lillie Hill, and her sister, Barbara Albrecht (Richard).

In lieu of flowers, the family requests that memorial gifts be designated to the Fred Hutchinson Cancer Center for the Breast Cancer Research Fund. Memorials can be made online at engage.fredhutch.org/goto/joan_middendorf or mailed to Fred Hutch, 1100 Fairview Ave N, Mail Stop J5-200 Seattle, WA 98109. Please make sure to include Joan Middendorf’s name when sending in the donation. Thank you.