Whether the city should charge Edmonds’ downtown Business Improvement District (BID) a fee for processing the paperwork and providing other services became a point of contention during the Edmonds City Council Finance Committee’s Tuesday night meeting.

The topic was raised as part of an overarching discussion about the BID — also known as the Edmonds Downtown Alliance, or ED! — that included how to addresss the more than $38,000 in late dues owed by member businesses.

Noting the costs involved in monitoring and collecting those dues payments — along with other services the city provides  — City Administrative Services Director Dave Turley has suggested that the city charge the BID a fee — ranging from $6,000 to $8,000 annually.

The BID was formed with city council approval in early 2013, and includes an area in downtown Edmonds bounded on the north by Bell Street, on the east by Durbin Street, on the south by Homeland Drive and on the west by Sunset Avenue South and Railroad Street.

The BID operates with an annual budget of approximately $80,000, and all revenues come from dues assessed to the members — currently $30 to $90 per quarter. Through these assessments, the BID funds programs such as beautification, marketing and parking.

How to enforce payment of those dues has become an ongoing topic during recent council finance committee meetings. While a task force was formed in January to develop policy, Turley noted there are still outstanding questions. Among them: How to collect over $38,000 in late dues owed by businesses, whether the city should continue charging 12% interest on accounts that are in arrears and if it should continue sending businesses to collections when they get behind?

Councilmember Will Chen asked for background on why businesses are not paying their dues. Rogue Boutique owner Kimberly Koenig, who serves as president of the ED! board, replied that the reasons are twofold. “I think that some businesses have struggled through COVID and I think that some choose not to pay.”

As of Monday, 32 out of the BID’s 400 member businesses are in arrears.

Koenig added that the number of people choosing not to pay “isn’t growing,” but is the same business owners who have opposed the BID from the beginning.

Councilmember Diane Buckshnis noted that in 2019, the council decided not to approve a city proposal to suspend the business license of any downtown business delinquent in its payments to the BID. The council’s inaction just pushed the issue down the road and it’s time to address it, she said.

“There’s been this dichotomy that has gone on for all these years (regarding the BID),” Buckshnis said. “That’ll be one of the largest issues that we have — is determining that the establishment of the BID was all right and everything was OK.”

Historically, Turley said, the city has begun sending BID members to collections when they are six months behind in their dues, but hasn’t seen much return on that effort.

Addressing the question of what actions business improvement areas in other communities take to address dues nonpayment, Community Services and Economic Development Director Todd Tatum said that “some of them write them off, some of them accept there’s an amount that are not going to pay, some send them to collections like we do,” Tatum said. “It really is just a policy question about how much we accept in the system.”

Regarding the city’s proposal to charge ED! for administrative services, both Koenig and ED! administrator Carrie Hulbert said they were concerned that the proposed fee represents a large portion of the organization’s budget, and would force them to cut programming.

The bottom line, Tatum said: “There are some chargebacks and…those chargebacks are generally low as a percentage of overall revenue.”

The City of Poulsbo, with a business improvement area budget of $80,000, charges $3,000. Koenig noted that “they (Poulsbo) really look at the increased revenue on sales tax and increased tourism and what we (businesses) bring to the city as a way to offset the staff time and expenses, basically saying that the value of the marketing that we’re doing for our downtown and the sales it is bringing sort of offset what the city in partnership is helping us.” 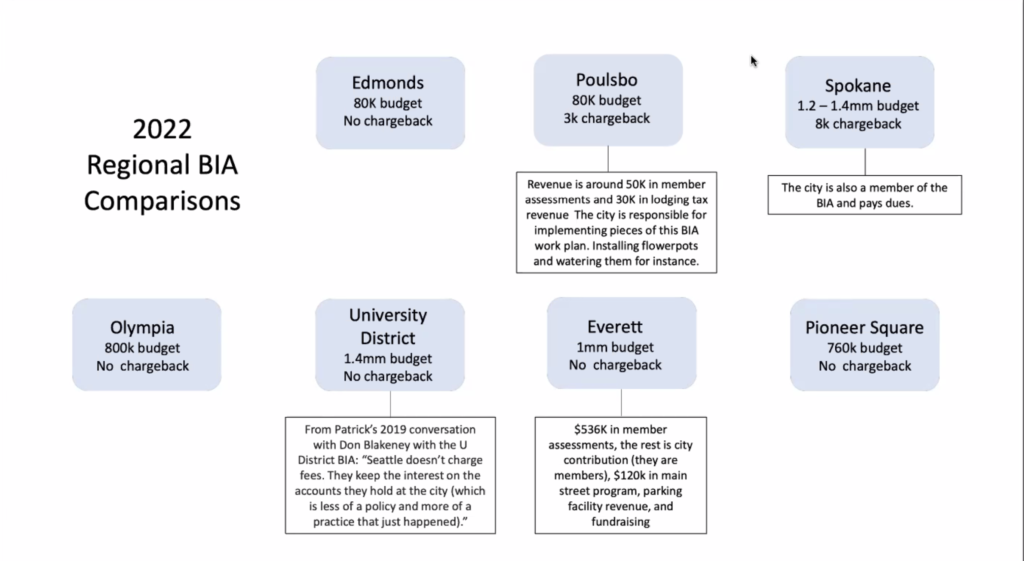 But Turley pushed back on those assertions, noting that the purpose of ED! “is to benefit the downtown. You’re absolutely using resources from city hall and we’re here to benefit the entire city,” Turley said. “And so you are bringing resources for a very small part of the city. It’s a little unfair to say you are helping the city out and so we should give you services for free.”

Turley also challenged comparing Edmonds to associations located in Seattle, where the City of Seattle probably has “200 accountants and can absorb the time that it takes to manage something like this without even noticing it. I have about six (accountants). These are really unfair comparisons as far as I’m concerned.”

While stating that she valued Turley’s opinion, Koenig reiterated the large percentage of the Edmonds BID’s budget that would be impacted by the proposed Edmonds fee. She then asked “if there is a number that you could be more comfortable with that isn’t $8,000 that would be a reasonable ask?”

Buckshis then suggested that Turley and Tatum “could get together and determine a range” that would be acceptable to all.

As for the 12% charge on accounts that are in arrears, Council President Vivian Olson — who sat on the task force formed to discuss BID-related issues — explained that since the 12% isn’t compounded annually, “it ended up being a really small amount,” especially compared to late charges on other bills.

The BID-related issues will be discussed further when ED! presents its work plan to the city council Oct. 25.

During the Council Parks and Public Works Committee, councilmembers considered a range of issues. Among them:

— A discussion about options for providing sufficient electrical power for the Civic Center Playfield. Snohomish County PUD has requested an easement to replace an existing pole-mounted transformer with a new pad-mounted transformer, but the easement may impact an easement for the Edmonds Boys and Girls Club, which is planning to build a new facility on the property. Discussions will continue on solutions, Parks, Recreation and Human Services Director Angie Feser said.

– An update on professional services agreements for design/right-of-way phases for the next two stages of the Highway 99 Revitalization Project. Plans for Highway 99 renovations have been in the works since the Edmonds City Council approved a subarea plan for the highway and surrounding neighborhoods in 2017. The changes aim to address traffic and pedestrian safety and livability concerns for the portion of the highway that runs through Edmonds.

The city is now working on stage 2, which includes construction of a landscaped center median and dedicated left-turn lanes from 244th to 210th Streets Southwest, with completion expected by early next year. Stage 3 will involve the segment from 244th to 238th Streets Southwest and stage 4 will focus on 224th to 220th Streets Southwest. Both stages will include capacity improvements, as well as the addition of planter strip on both sides of the street, new sidewalk, new street/pedestrian lighting, better stormwater management, targeted utility replacements (water/sewer), potential undergrounding of overhead utilities (could cost up to $11 million), and softscape treatments.

The city issued a request for qualifications to select the design consultant for stages 3 and 4 and it received one response, from SCJ Alliance. SJC, which also worked on the design phase for stage 2 of the Highway 99 project, was selected for the work. The city is still working with SCJ on a cost estimate for the project, and will share that with the council when it is available.

– Consideration of a parking lot agreement between the Port of Edmonds and the City of Edmonds related to last year’s installation of the tsunami warning siren at Beach Place. The agreement — which will be placed on next week’s consent agenda — clarifies the city is responsible for providing power to the siren and replacing the batteries.

– A report from Jon Greninger, Snohomish County Solid Waste Superintendent, regarding the county’s Comprehensive Solid and Hazardous Waste Management Plan. Greninger noted that the plan still needs to be approved by the Snohomish County Council and also must be reviewed by the state Department of Ecology. It includes technical memorandums that cover, among other items, planning for climate change and sustainability, waste prevention, recycling and waste collection. The committee agreed to place a resolution to adopt the county’s plan on next week’s consent agenda. However, councilmembers agreed — in consultation with new Public Works Director Oscar Antillon — that it would be a good idea for Greninger in the future to provide an educational presentation to the public on the county’s solid waste management efforts.

– Review of a contract addendum for the Driftwood Players lease at the Wade James Theater. Antillon noted that the lease agreement — in place since 2017 — expires at the end of the month and the Driftwood Players wanted to renew for another five years. Although Edmonds doesn’t charge the nonprofit theater company rent to use the theater, the city is responsible for maintaining the building exterior, grounds and parking lot. After discussing what would happen if the Driftwood Players chose to sublease the facility to another tenant, committee members Neil Tibbott and Dave Teitzel requested that language be added stating that any profits resulting from such a sublease be split 50/50 with the city.