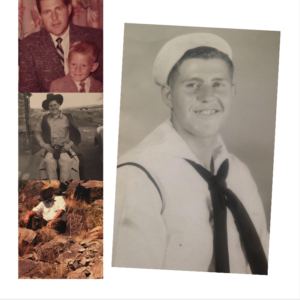 He was a 19-year-old cowboy

who loved to break horses

as a teen fur trapped for pocket money

who once spent a day shearing sheep for $1

who once hit a stump while on a tractor

his body went over the engine he was run over

who crawled home with broken ribs and a collapsed lung

to a farm many miles from any doctor

who was given Penicillin

who did not know how to swim

volunteered for the Navy

who shot down a kamikaze

off the coast of Japan and then

who wrote a poem about

who saw a Betty miss his ship

his comrades from another ship went to a watery grave

who said he took up smoking filtered cigarettes

to protect his lungs from diesel fumes

whose ship was anchored nearby

the day fire rained down on Hiroshima and Nagasaki

who took the dead pilot’s sword home as a trophy

but it was never his sword

I thought I knew his story

my older brother told me

he knew a Japanese man at work

asked the man to read the sword’s inscription

he found the address

of the dead pilot’s parents in Japan

their son’s sword to them

the sword I knew was not the original

it was a gift from a grieving man’s parents

Davis is a Welsh surname

so in this legend there are TWO Excaliburs

just as there are in legend of Arthur

who according to legend was from Wales.

The Goldfinch (Not the Movie)

The goldfinch bathes.
Of course she is not gold,
She is drab,
To sit silently on the nest,
In a world full of predators.
Oh, but how she bathes,
With gusto.
She comes to my fountain every day,
More than once a day.
Goldfinches bathe like humans,
She really enjoys it,
You can tell.
She stays a good long while,
Flittering her wings,
Wetting her belly.
I love to watch her bathe;
She is not ashamed,
Nor am I.
Then her significant other shows up
And they leave:
The time to make goldfinch love is past,
Perhaps their kids are hungry, or
Perhaps her mate just wants some we time together.

To watch a goldfinch bathe:
https://www.youtube.com/watch?v=qfjw2dFWTCs

Hello, Dolly!
We met you briefly one day for the rest of our lives
When a now old man brought you to my wife,
Who attempted to bring you back to life,
Neither of us met the older man who first breathed life into you,
Nor the young woman you brought back from the dead like Lazarus,
In the brightly-lit darkness where concertina wire sang its daily hymns of death,
Where the guards chanted, “Arbeit macht frei”,
Where “one day is with the Lord as” more than “a thousand years”,
We learned from a now old man how
His teen mother lost her first husband to starvation in a Hungarian work camp,
An older man in that dark place took a shine to a young widow,
He made you from rags, yours is a priceless “rags to riches” story,
Because the older man and the young widow came to America
And had a son, now an old man,
And thanks to that man now old we had the sad honor of knowing the five of you,
Holocausts continue:
Most good people wash their hands of refugees and other “malefactors”,
Hello, Dolly!
We met you briefly one day for the rest of our lives,
And we learned
Rag dolls can sing and dance like the multiracial, partly-Jewish Carol Channing,
Rag dolls shed tears of anguish, and
Rag dolls can sometimes resurrect the living dead.

Dedicated to Charlotte Delbo, Sara Kofman, Milena Jesenskà and all other victims of genocide: Yesterday, today and tomorrow.
Delbo, Charlotte. None of Us Will Return. New Haven CT (1997): Yale University Press. The memoire of a French resistance fighter who survived Auschwitz.
Kofman, Sarah. Rue Labat, rue Ordener. Lincoln, NE (1996) : University of Nebraska Press. The author’s childhood in hiding in Nazi-occupied Paris; after publishing her memoire, the author, a close collaborator with deconstructionist Jacques Dérrida, died by suicide at the age of 60.
Reyes, Alina. Nus devant les fantômes (Naked Before Ghosts) Paris (2000) : Número Un. About the Czech resistance fighter who died at Auschwitz in January 1945. In the 1920s, Jesenskà was the first person to translate Franz Kafka’s writings out of German. Like many people in the world today, Kafka’s situation was absurd. A secular Jew born in the former Austro-Hungarian Empire, in the newly-created Czechoslovakia Kafka spoke neither Czech nor Slovak, not even Yiddish. Kafka died in his 40s from tuber-culosis less than 15 years before Hitler, also born in the former Austro-Hungarian Empire, invaded and annexed the now former Czechoslovakia.

Jonathan E. “Jack” Davis is semi-retired community college instructor who currently teaches medical Spanish to allied health students. He is also a part-time community volunteer with refugees from Latin America and Afghanistan in Las Cruces, NM, where he lives with wife Silvia. Davis has written scores of short stories and personal narratives, a smattering of poetry, and two unpublished novels. His father John V. Davis saw combat duty in the Pacific theater as a teenager aboard the destroyer U.S.S. Hugo D. Black.