Most of us are too young to remember what a world being ravished by polio was like. But in the 1940s and ’50s, polio either paralyzed or killed over half a million people. There is no cure, only eradication.

Why talk about this now, polio is eradicated, right? Almost. We are so close. The annual number of wild poliovirus cases has declined by more than 99.9% worldwide from an estimated 350,000 in 1988 when the Global Polio Eradication initiative was launched.

Today, there are only two wild polio-endemic countries left: Afghanistan and Pakistan. Without polio eradication eﬀorts, more than 18 million people who are currently healthy would have been paralyzed by the virus.

Closer to home, the CDC announced in September that polioviruses found in New York meet the WHO’s criteria for circulating vaccine derived poliovirus (cVDPV), meaning that poliovirus continues to be transmitted in Rockland County, N.Y. and surrounding areas.

Rotary has contributed more than $2 billion and countless volunteer hours to immunize more than 3 billion children in 122 countries. In addition, Rotary’s advocacy eﬀorts have played a role in donor governments’ decisions to contribute more than $10 billion to the eﬀort.

The United States now joins a list of about 30 other countries where cVDPVs have been identified. Circulating vaccine-derived poliovirus occurs when local immunity to poliovirus is low enough to allow prolonged transmission of the original weakened virus in the oral polio vaccine (which the U.S. does not use). As the virus circulates and more genetic changes occur, the virus can regain its ability to infect the central nervous system and cause paralysis.

As long as polio exists anywhere, it is a threat everywhere. This is not the time to let up the fight — but to fight even harder.

Please join Edmonds Rotary as we work within our global system to continue toward eradication. Any community member who donates $50 or more will receive this EndPolioNow pin so you can show your pride in helping eradicate polio — forever. Every dollar raised is triple-matched by the Bill & Melinda Gates Foundation. 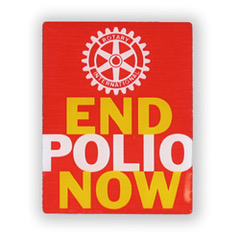 To make a donation and receive your pin, contact Maggie Peterson at Mag2Teach@comcast.net.

Maggie Peterson is an Edmonds resident and a member of the Edmonds Rotary Club.