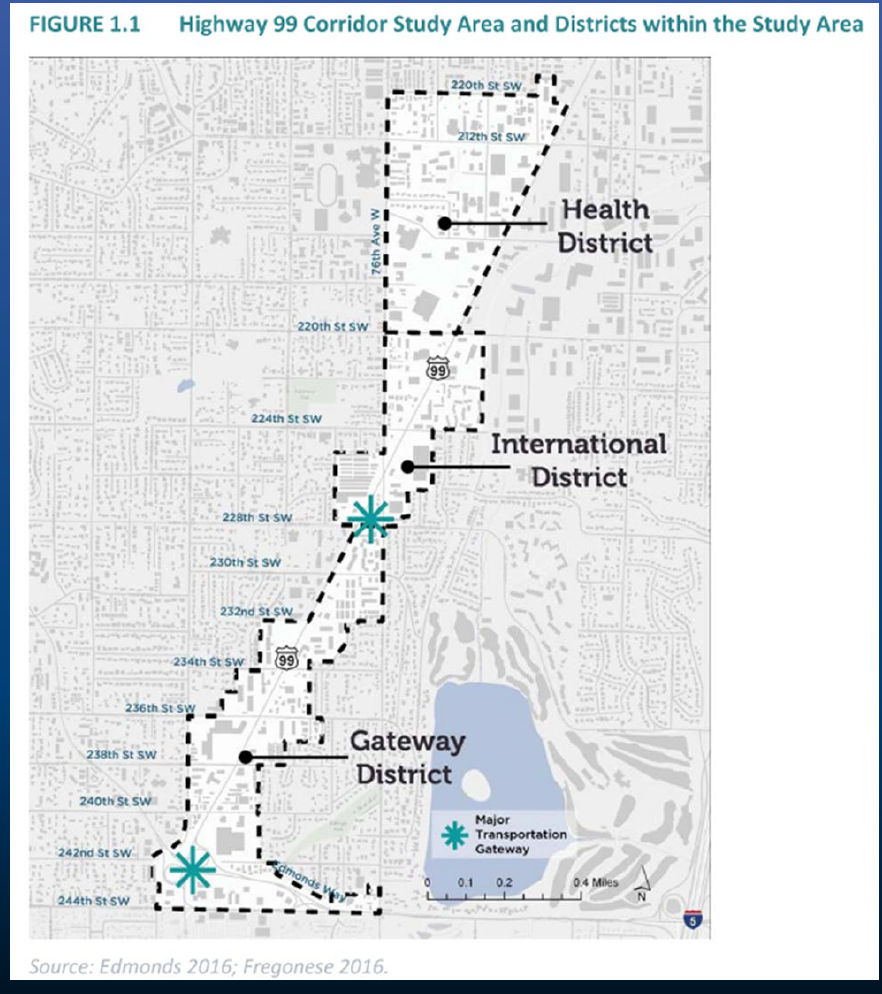 Responding to Gateway residents worried about the impact of Highway 99-area developments on their neighborhood, the Edmonds City Council Tuesday night voted 4-3 to conduct a supplemental Environmental Impact Statement (EIS) to the Highway 99 Planned Action Ordinance that was approved by the city council in 2017.

The vote followed a unanimous council decision two weeks ago approving an emergency interim ordinance to require stepbacks in the area for multifamily developments located across the street from single-family zones. The ordinance came after residents of the Gateway District, which is located just west of Highway 99, began questioning the impacts of a 261-unit apartment proposed at 236th Street Southwest and 84th Avenue West.

The Gateway district was among those rezoned as part of the Highway 99 subarea plan, which consolidated most of the zoning categories for the Highway 99 corridor into one general commercial designation.

As part of their public comments encouraging approval of that ordinance two weeks ago, residents also requested that the city conduct a supplemental EIS due to traffic and stormwater runoff impacts from new development. Several Gateway residents returned to the council Tuesday night, reiterating their request.

Glenn Douglas said that he and other Gateway neighbors believe that traffic and safety issues are “inadequately addressed” in the final EIS for the Highway 99 subarea plan. “Adding 1,000 people…to our little neighborhood of a few hundred people is a major impact,” he added.

Neighbors don’t believe the current plan “evaluated the traffic situation or the impact of pedestrians, a lack of space, curbs on the road, it’s a pretty dangerous place,” Douglas said.

Becky Chandler, another Gateway resident, said the council should consider development concerns in their neighborhood just as they have in the Edmonds Bowl. In addition, she said she is worried about the risk of displacing the area’s diverse population due to development-fueled property value increases.

“The vision of the subarea plan was for three- and four-story apartment buildings and five- and six-story mixed-use buildings,” Chandler continued. “Yet developments being proposed in the Gateway district are not in keeping with that vision and there’s no way for residents in adjacent neighborhoods to interject in the development process.”

The council-approved planned action ordinance for Highway 99 was based on a process provided under the state’s Growth Management Act and the Environmental Policy Act. It allows jurisdictions to streamline the environmental review process for projects that have already been covered by an EIS developed for a subarea. According to city staff, early environmental review provides more certainty to developers regarding what will be required, and to the public in terms of how environmental impacts will be addressed.

Introducing a staff presentation to the council Tuesday night, Development Services Director Susan McLaughlin acknowledged “the significant amount of public comment” the city has received about the issue. However, she added that the city “has seen a negligible amount of development that was anticipated under the (Highway 99) planned action. The cumlative impacts were nowhere near the cumlative impacts that were anticipated.”

Planning Manager Kernen Lien explained that the city conducted a five-year review of the planned action review, which identified development thresholds for the subarea plan through 2035. These include number of residential dwelling units, square footage of non-residential uses and PM peak hour trips. There were also three types mitigation measures identified in the EIS that were attached to the planned action ordinance.

Not all of those mitigation measures have been implemented in the first five years, nor was that an expected outcome, Lien said. “Some of them just, frankly, take time,” he said. Park acquistion was something that was mentioned by public commenters; Lien noted that acquiring parkland was included in city’s Parks, Recreation and Open Space (PROS) plan, updated this year. Another mitigation, development improvements — including sidewalks, pedestrian areas and frontage improvements — won’t occur until development happens, he added.

The city conducts ongoing monitoring and review to ensure that development proposals comply with the Highway 99 planned action and those are tracked in a spreadsheet, Lien said. If a project does not meet the planned action requirements, additional State Environmental Policy Act (SEPA) review is required.

Lien then shared a chart showig the current planned action projects in the subarea and the thresholds established in the EIS, noting what is remaining.

McLaughlin argued against conducting a supplemental EIS, calling it a “rigid environmental process that has very defined methologies that may not get the outcome which we seek.” For example, she said, the EIS transportation methodology relies on a vehicular level of service at intersections. “If we count cars and define impacts by cars at intersections and if the community is really here tonight talking about impacts to people, walkability, bikeability and the livability of their neighborhood, all we’re doing through an environmental document is expanding intersetions and adding signals,” she added.

On the other hand, shifting to a multimodal level of service that estimates not only vehicles but buses, bicycles and pedestrians would allow transportation impact fees to be used to build sidewalks, a need mentioned by Gateway residents. Currently, use of those fees is limited to vehicle traffic capacity improvements, McLaughlin said.

She stressed that she believes that staff and council can find solutions to the community’s concerns outside of the supplemental EIS, similar to what they did with the stepback issue two weeks ago.

Conducting a supplemental EIS is “not the vehicle in staff’s opinion, to make the changes we all want to see,” McLaughlin said.

McLaughlin also said she thinks that many of the community’s concerns can be addressed through the city’s efforts to update its 2024 Comprehensive Plan.

Councilmember Diane Buckshnis disagreed, pointing to a host of environmental issues that should trigger a supplemental EIS, from the poor air quality caused by more vehicle traffic to increased stormwater runoff. “It’s time for us to update this. Things have drastically changed in the environment,” she said.

Councilmember Jenna Nand, a Lake Ballinger-area resident newly appointed to the council Monday night, said she empathized with Gateway neighbors who feel “their concerns are falling on deaf ears.” It’s irresponsible, she said, to add hundreds of housing units to the neighborhood without addressing traffic impacts.

Councilmember Dave Teitzel asked how much it would cost to conduct a supplemental EIS and McLaughlin replied that a ballpark estimate is $250,000.

Responding to a question from Council President Vivian Olson, McLaughlin also acknowledged the community’s desire for better public notice, adding that her staff is thinking about requiring developers to host a community meeting so they can talk with neighbors about their projects prior to the design review process. “This is something that other jurisdictions do. It’s highly effective.” McLaughlin said.

Councilmembers Will Chen and Susan Paine both stated their concerns about new development projects displacing low-income residents. Chen then made a motion to require a supplemental EIS study, which was seconded by Buckshnis.

Councilmembers Teitzel, Paine and Neil Tibbott voted against the supplemental EIS, stating that they wanted to see other ideas from McLaughlin’s department before supporting the study. Olson joined Chen, Nand and Buckshnis in voting for it, but added it was with the idea that the council could reconsider the vote next week if more information comes forward from McLaughlin and her staff.

Also on Tuesday night, the council:

– Discussed a code update related to services provided by the city attorney and prosecuting attorney. However, more work was requested on the language so no decision was made.

– Heard a 2023 budget presentation and department updates from Administrative Services Director Dave Turley, who is requesting $120,000 to continue paying for an ARPA consultant to oversee federal ARPA grant spending; $36,100 to cover software licensing cost increases and $65,000 for replacement of staff computers, laptops and networking equipment. Edmonds Municipal Court Judge Whitney Rivera did not request any new budget items for the court in 2023 but did provide an update on the court’s work.

One agenda item — reporting the results from this summer’s community visioning process for the Edmonds Comprehensive Plan update — was delayed after the council ran out of time.