After several weeks of not much weather besides heat, sun and smoke, it is finally starting to feel like fall outside, especially with the return of the rain.

In the span of about seven days, we received over four times the amount of rain than we had in about three-and-a-half months. Check out that spike in the graphic above. It’s about darn time!

On average, the month of October has seen 3.35 inches of rainfall at Paine Field. From 1998 to 2021, we’ve had measurable rainfall on an average of about 17 days over the course of the month. So far this year, we’ve only had six days. We will definitely finish the month below-average in terms of number of days with measurable rainfall, but some models are suggesting that we could get closer to the average total rainfall by the end of the month, thanks to a couple systems heading our way. More on that in a moment.

Before going into the forecast further, let’s take a look at a summary of the weather we’ve seen on Halloweens since 1998 at Paine Field.

We’ve seen measurable rainfall on just over half of our Halloweens since 1998. An interesting thing that can’t be seen on the above chart is that we have not had a wet Halloween since 2018. For the past few years, the issue for trick-or-treaters has been staying warm — not dry. (Lows have been in the 30s since 2019…brr!)

Over the weekend, while it may still be a bit chilly compared to what we’ve been used to, we are expecting temperatures near normal for this time of year, with highs in the low to mid 50s. The big story for the weekend and Halloween will be a couple of systems set to impact us, bringing along rain and gusty winds.

The UW Ensemble plumes shown above for Lynnwood predict an average total rainfall of 0.6 inches for this first storm. Remember that ensemble averages tend to be more skillful than any one model on its own.

After this first system, we are expecting to dry out for the rest of Friday and into Saturday. A few scattered showers aren’t impossible, but things are looking mostly dry. If you have any plans to attend corn mazes or pumpkin patches, Saturday will likely be the best bet if you want to stay as dry as possible.

The rain returns late Saturday as a front moves south from Canada and is projected to continue through Sunday night. Expect an increase of gusty winds with this system, as well. Showers will likely continue at times through Halloween, so if you’re planning on going out trick-or-treating, you will want to prepare for rain. To do so, I highly recommend checking a radar app (I personally use RadarScope, which costs money, but there are plenty of good free options out there) before going out to see if you’re about to get wet. In checking ahead of time, you may be able to plan your excursions around the rain.

After Monday, an upper-level trough settles into the area. A model depiction for Tuesday morning can be seen below. 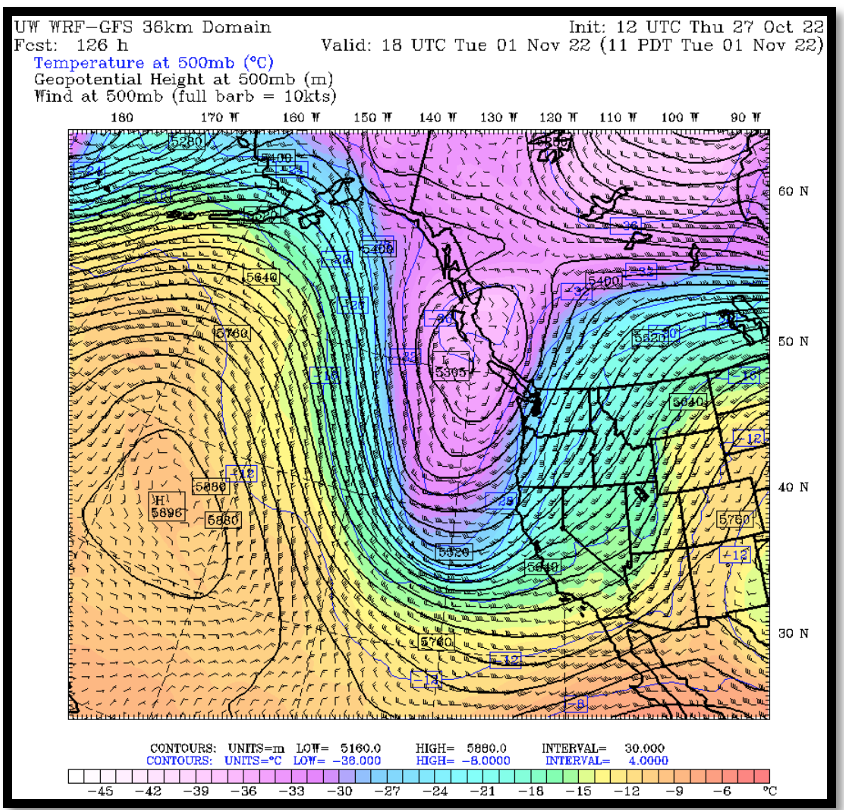 This will help to keep us cool and potentially showery. Highs are expected to be in the upper 40s, which will definitely feel quite brisk. Lows could even drop into the 30s for the first time since May. Fall is here in full swing, folks — but I’m loving it. There’s just something so cozy about bundling up with warm clothes and blankets, listening to the sound of wind and rain outside. It’s been long overdue.

Have a great weekend and a happy Halloween! Stay spooky.