After hearing from a Gateway neighborhood property owner and developer unhappy with an interim emergency ordinance requiring stepbacks for multifamily housing iocated across the street from single-family homes, the Edmonds City Council Tuesday night agreed that the ordinance should be continued — for now.

The emergency interim ordinance — which the council approved unanimously Oct. 4 — was aimed at ensuring new development across the street from single-family zones provides stepbacks as discussed in the Highway 99 final Environmental Impact Statement.

The interim ordinance was approved in response to concerns expressed by residents in the Gateway neighborhood, located just west of Highway 99, regarding the 261-unit Terrace Place apartment proposed at 236th Street Southwest and 84th Avenue West.

As is the case with any emergency interim ordinance, the council is required to hold a public hearing within 60 days, after which it decides whether to extend the ordinance or repeal it. Tuesday night’s public hearing –which drew comments from both developers and Gateway residents — came after a staff presentation from Development Services Director Susan McLaughlin.

Given the implications of such a requirement, McLaughlin said that following council passage of the interim emergency ordinance Oct. 4, her staff took a closer look at what conversations had been had in the past with councilmembers on the issue. In doing so, she said, staff members found “critical information” showing that councilmembers at several meetings in 2017 considered requiring stepbacks across the street from single-family zones but dismissed the idea.

On Aug. 15, 2017, McLaughlin continued, the council unanimously approved the Highway 99 subarea plan, which consolidated most of the zoning categories for the Highway 99 corridor into one general commercial designation, including the Gateway neighborhood. Stepback requirements were included for multifamily buildings adjacent to single-family properties, but not for those located across the street.

As a result of the information uncovered during that research, McLaughlin said staff were recommending that the council vacate the interim ordinance. She instead proposed that the city work to “pinpoint a solution that doesn’t have us go back on robust conversaitons and decisions that were made (in 2017) with the development and neighborhood communities along wth staff and consultant analysis.”

“It’s really important to have that developer confidence, and also the partnerships with developers to really get the public improvements that we want in these neighborhoods,” she added.

The city, she said, has “tools at our disposal for code amendments without going through lengthy processes.” For example, she said that staff can recommend a requirement that a developer host a neighborhood meeting at the onset of projects.

After the presentation, Councilmember Jenna Nand asked if the city has received feedback from developers regarding the emergency ordinance. McLaughlin replied that some developers with active projects have expressed concerns but she expects more to follow, noting the emergency interim ordinance impacts 39.3 acres of potential development.

During the public hearing regarding the matter, the council heard from Stanley Piha, one of the owners of the vacant land where the Terrace Place development is planned. For almost a year, Piha said, the property owners have been under a purchase-and-sale agreement with a builder/developer to acquire the site, with plans to build a multifamily transit-oriented development there.

Piha noted that the developer has been working under the city’s existing zoning codes and rules, and the sale was scheduled to close at the end of December.

“The interim ordinance has thrown this into an abeyance; we don’t know what the possibilities of procedure are going to be,” Piha said. He added that the council had “fully vetted” the process of stepbacks across the street from single-family housing in 2017 and decided against them. That was after staff and consultants said the stepbacks were not warranted, “due to the separation generated by the required setbacks on each property plus the width of the city right of way,” Piha said.

Also commenting was Brian Bergstrom with Synergy Construction, representing the developer of the 84th Avenue West and 236th Street Southwest property. “We were quite surprised when we learned of the emergency ordinance passing,” Bergstrom said. The company pulled in its architects to see what the stepback requirement would mean for the Terrace Park development — and determined that 40 to 50 housing units could potentially be lost.

“I came to express tonight our willingness to work with city staff to hopefully find a workable solution, not only for the project but for the city and the community,” he said.

Gateway area residents also weighed in during the hearing. One of them, Judi Gladstone, urged the council to continue the emergency ordinance to help protect the neighborhood, but also said she welcomed a conversation with the developer to see what types of solutions could be found.

The council must adopt findings of fact regarding an emergency ordinance a week after the public hearing that support the decision to either continue it or repeal it. Noting that it was unlikely the council could make a decision to repeal the ordinance by next week, Council President Vivian Olson made a motion to direct the city attorney to prepare findings of fact to continue it through April 6, 2023. However, City Attorney Jeff Taraday confirmed that the ordinance could be repealed at any time prior to that date, if the council decides to do so. 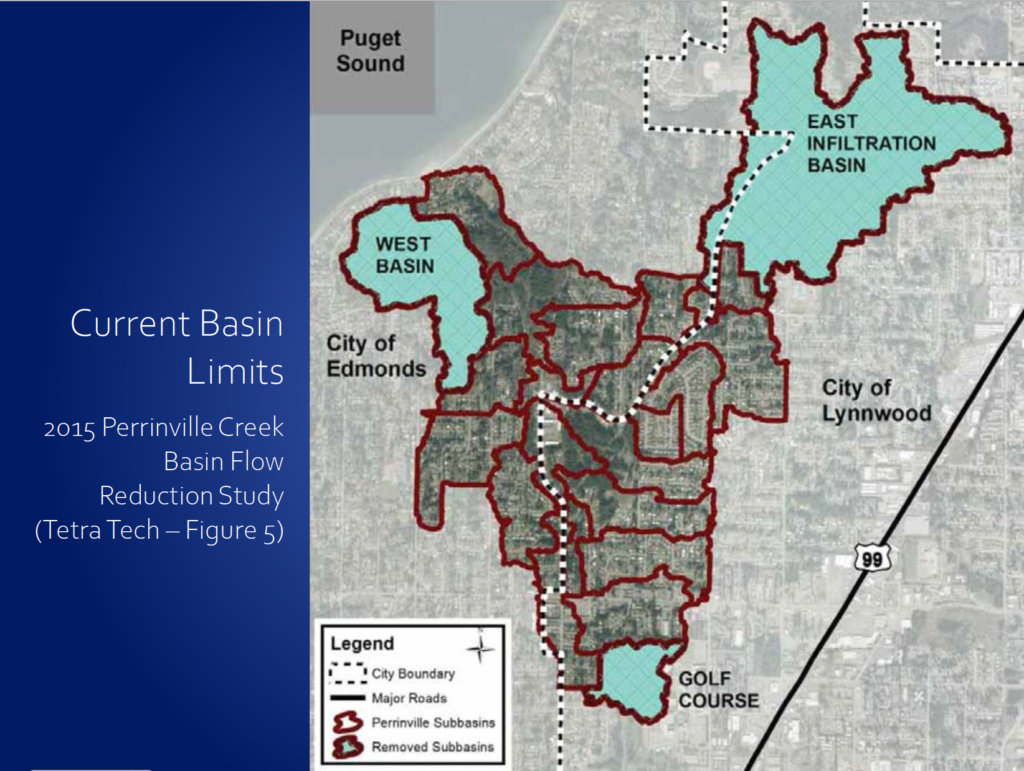 The city has been working for years to develop strategies to control flooding on Perrinville Creek between Talbot Road and Puget Sound. A flow reduction study in 2015 resulted in a list of recommendations, from drainage improvements to a municipal raingarden program. The city just launched phase 2 of an infiltration project at Seaview Park aimed at assisting the effort.

The city is also partnering with the City of Lynnwood — which sends stormwater runoff to the basin –to apply for a $500,000 Department of Ecology grant to analyze the problem, and is also looking at other possible grant opportunities.

The council then heard from representatives of Environmental Science Associates (ESA), which the city hired in June to develop a plan to control Perrinville Creek flooding after heavy rains and sediment washed out the stream several times in December 2020 and January 2021. A city diversion dam failed, pushing water over Talbot Road and flooding three properties. 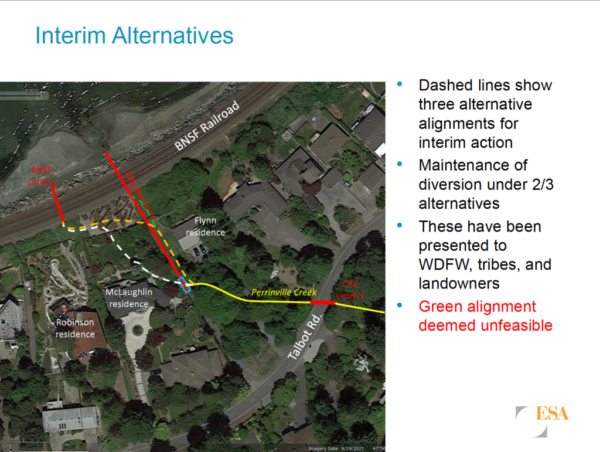 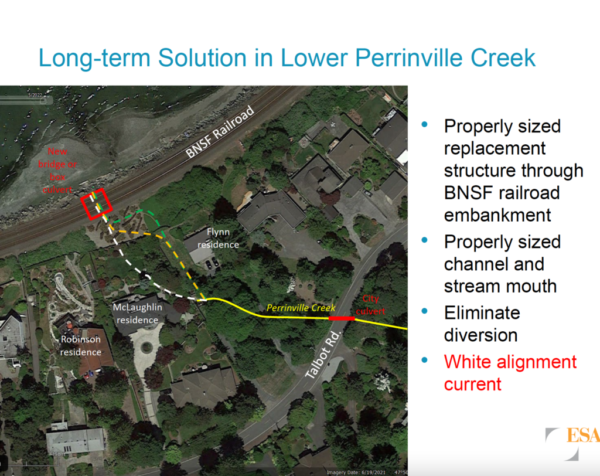 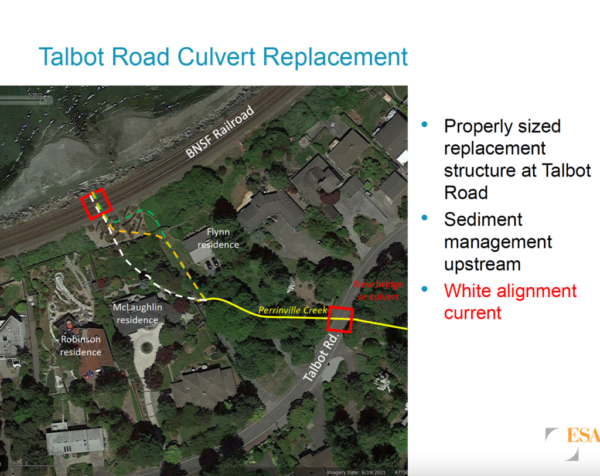 ESA is working to design a new interim stream bed route for lower Perrinville Creek, with much larger culvert openings, with completion anticipated in 2023. They will also be developing a long-term solution — planned along the same route as the interim design — that involves replacing undersized culverts through the BNSF railroad embankment with a properly sized bridge or box culvert to permit fish passage. This will be followed by watershed management recommendations and activities and installation of a culvert to allow for fish passage at Talbot Road.

The council also had a discussion regarding proposed 2023 allocations from Edmonds’ share of federal American Rescue Plan Act (ARPA) dollars. Community Services and Economic Development Director Todd Tatum reviewed the city’s current distribution of ARPA funds as approved by the council and how the city is proposing to redistribute some of the money to other project through various 2023 budget proposals. Some councilmembers stated the city should continue its efforts to provide grant assistance to those impacted economically by the pandemic, whether that is to households, businesses or nonprofits. Tatum confirmed that a new round of grant funding will be offered in first quarter 2023, after the 2023 budget process is complete.

Council President Olson said she believes that changes in COVID recovery allocations proposed in the mayor’s 2023 budget were contrary to “the council-created and approved ordinance of how we intended to spend ARPA. There was no conversation, never mind an ask from the mayor, that there was a different plan or could we change what that allocation could be.”

“I just feel like our legislative intent was ignored and that it was disrespectful to receive a budget that had the ARPA spent in such a different way,” Olson added.

The council also held two additional public hearings: one on the proposed 2023-2028 Capital Facilities Plan and Capital Improvement Program, and the other on the 2023 budget.