The Edmonds City Council during its Tuesday night business meeting voted unanimously to maintain the city’s property tax at it current rate, but did vote for a 1% increase in the EMS tax.

Under state law, cities are allowed to raise property taxes 1% annually. Although the council voted for a 0% increase, it did agree — as it has in past years — to “bank” the 1% increase. That’s a practice that gives local governments the authority to levy that additional 1% at a later date.

The vote to maintain the property tax came after a public hearing, during which resident Beth Fleming said that raising the tax would be “a bad look” during these inflationary times.

The council also had two recognitions. The first was a proclamation recognizing the City of Edmonds as a Purple Heart City, acknowledging the physical and emotional sacrifices that military veterans have made in protecting the nation’s freedoms. And the second was a resolution honoring and thanking the volunteers who successfully worked to daylight the Shellabarger Creek channel on the west side of Highway 104, significantly reestablishing water flow into the Edmonds Marsh. Read more about that effort and the volunteers involved here.

In addition, the council Tuesday approved by a 5-2 vote a 1% increase in the city’s annual emergency medical services (EMS) levy. The tax will raise an additional $42,319 annually, which can only be used to fund EMS care or services. In moving to approve the increase, Councilmember Susan Paine noted that the additional revenue will help supplement the city’s budget investment in emergency medical services.

Council President Vivian Olson said she didn’t believe the EMS levy increase was necessary this year because the city has received in its budget an influx of federal American Rescue Plan Act (ARPA) funding. Joining Olson in voting no on the EMS increase was Councilmember Jenna Nand.

The public hearing on the property and EMS taxes was one of several budget-related matters before the council Tuesday night. Those discussions will continue Wednesday, Nov. 2, with a special meeting starting at 5 p.m. for two more budget presentations: from the police department and the community servies and economic development department. See that meeting agenda here.

The council also held two other public hearings — one on the city’s revenue sources for the proposed 2023 budget and the other on the budget itself. (You can learn more about the budget on the city’s website.) 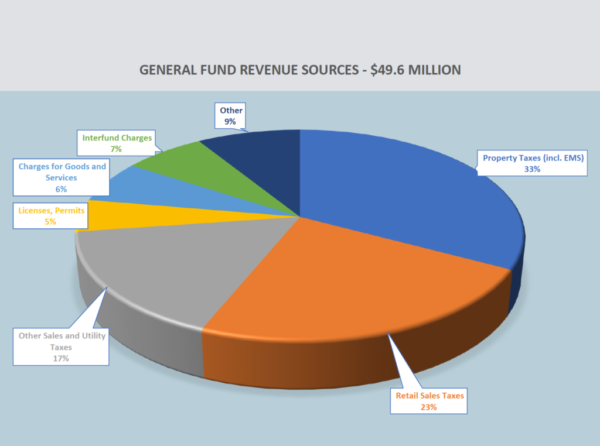 Focusing on the city’s $49.6 million general fund, Administrative Services Director Dave Turley explained that one-third of that funding source is from property taxes. “It’s kind of good because because property taxes are relatively stable, but it’s not good because it doesn’t keep up with inflation,” Turley said. The next biggest source is retail sales taxes, at 23%, followed by other sales and utility taxes at 17%. Other revenues include charges for services (13%), licenses and permits (5%), intergovernmental (6.6%) and fines and penalties (1%). 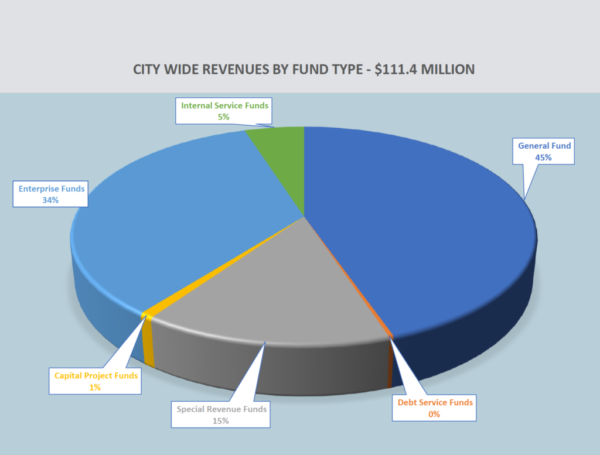 Real Estate Excise Tax (REET)  — collected when a property is sold — is projected to be $4.4 million next year, and is also a significant revenue source for the city, he said.

The city has received $11 million in ARPA funding and that is reflected in some of the proposed budget spending this year, with a focus on public safety, neighborhood improvements and environmental protection, Turley added.

In terms of trends, “Our revenues remain strong, we do foresee continued growth in sales taxes and REET,” he said. Despite talk of a recession, “I think it’s safe to be cautiously optimistic in those areas,” he added. That said, the city will continue to monitor economic conditions during the next year and make adjustments along the way.

During the public hearing on revenue sources, resident Jim Ogonowski wondered why that discussion didn’t include the city’s utility fund and a proposed utility rate increase that is embedded in budget decision packages — “which affects everybody.”

In other business Tuesday night — also related to the budget — the council received a presentation from the public works and parks departments on the city’s Capital Facilities Plan (CFP) and Capital Improvement Program (CIP) for 2023-26. The CFP is updated annually and identifies capital projects for at least the next six years that support the city’s Comprehensive Plan. CFP projects are capital improvement projects that expand existing facilities/infrastructure or provide new capital facilities to accommodate the city’s projected population growth in accordance with the Growth Management Act. The CIP, meanwhile, includes capital projects that preserve existing capital facilities.

Among the issues raised by councilmembers Tuesday night following the CFP/CIP presentations: Councilmember Teitzel said he has heard from residents who are concerned about a proposed infiltration project at Mathay Ballinger Park that could conflict with park improvements being made there. (Both public works and parks officials said they are looking for solutions.) Councilmember Will Chen asked Parks Director Angie Feser about whether an interlocal agreement with the City of Mountlake Terrace would be possible to take advantage of renovations occuring at nearby Ballinger Park. And Councilmember Nand suggested the possibility of community gardens and pocket parks to areas of the city where green spaces are lacking. Feser suggested that the councilmembers introduced budget amendments to pursue those ideas.

Many of the projects are connected to items in the city budget. You can review the Public Works and Utilities CFP/CIP presentation here and the Parks, Recreation and Human Services presentation here.

During a special 6 p.m. meeting prior to the business meeting, the council held a joint discussion with the Edmonds Planning Board and continued work on revisions to city code governing the city attorney.

Planning Board Chair Roger Pence explained the board serves in an advisory capacity to the council on regional and local planning matters. It is responsible for reviewing and advising the council on any changes to the Comprehensive Plan, to the text of a development code and to a zoning map. The board also serves as an ongoing parks board, advising on parks planning projects and on acqusition and development of park land and facilities.

Pence said the board has “two heavy lifts” coming up: First, the 2024 Comprehensive Plan update, which staff has been working on all summer and will unveil a draft vision statement for during the Nov. 5 Porchfest event in downtown Edmonds. And second, the city’s plan to do an extensive rewrite of its development code.

The planning board has been meeting remotely since the pandemic but voted at its last meeting to support a return to in-person meetings with a remote option, Pence said.

An issue raised by both councilmembers and planning board members in attendance Tuesday night was how to better involve the public in their meetings — and in particular the public hearings that the board has on a range of key topics. Several ideas were mentioned, including better use of social media to promote the meetings and connecting with organizations that could assist in reaching non-English speakers.

In addition to the board’s other tasks, councilmembers said that they hoped the board would be able to focus both on Highway 99 development and housing issues. They also thanked the board members for their dedication as volunteers to serving as the eyes and ears of the council on zoning issues.

Also during that special meeting, the council continued its discussion on a code update related to services provided by the city attorney and prosecuting attorney. The council ran out of time to finish that discussion and so continued it during the subsequent business meeting agenda.

After much discussion and some amendments, the council voted 6-1 to approve the code update. Councilmember Nand voted no after raising an issue related to whether the draft code, as written, would give an-house city prosecutor independence from a mayor or police chief when it came to making decisions on which cases to prosecute.

While the city currently contracts with both its city attorney and prosecuting attorney, the updated code addresses either in-house or contract attorneys. Mayor Mike Nelson had originally stated during his 2023 budget address that he would be asking for an in-house prosecuting attorney, but said during Tuesday’s meeting that he had withdrawn that proposal.