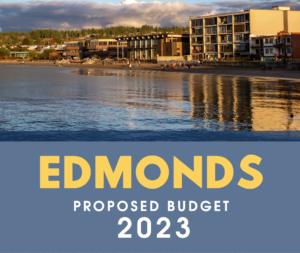 How much money does it take to run the City of Edmonds?

The proposed budget for next year tops $114 million. Right now, that’s $3 million more than the city has in revenue coming in 2023. But by the time the final numbers are approved, by law, it will be a balanced budget.

Mayor Mike Nelson, in his budget message to residents Oct. 3, laid out his hopes:

“After three years of COVID, now more than ever it is time to invest in our city. With strong sales tax revenues, a significant city surplus, and federal rescue plan funding, we are in a great position to invest in people and our city, while maintaining a balanced budget.”

Providing more to “our most underserved community” on Highway 99

What are some of these critical projects? How much could they cost? And how long can Edmonds count on that federal COVID recovery funding to help pay some big bills?

Edmonds has receive a total of $12 million in federal American Rescue Plan Act (ARPA) funds. Some has been spent in 2021 and some this year. For next year, the city is budgeting $3.9 million of that ARPA money.

Federal ARPA money for the city:

– $1,385,000 for new maintenance, equipment and staff for Civic Park and Highway 99 improvements

That $2.7 million for two city departments is 67% of the available $4 million in federal money included in the Edmonds budget in 2023.

The police department budget proposal includes hiring six new patrol officers and beefing up the department’s criminal investigative unit with two additional detectives and a crime analyst. It will also hire a full time administrative assistant for the assistant chiefs and the command staff.

But the department is not using the ARPA money for that. The salaries and benefits will come out of the general fund. The federal dollars will buy and equip nine new patrol cars, and add equipment and systems for the criminal investigative unit and support patrol staff.

Chief Michelle Bennett has already proposed a new chain of command – in addition to the two new assistant chiefs hired last year, she is creating the rank of commander as mid-level managers. Until now, the staff was set up as patrol officers, corporals, sergeants, then assistant chief. Commanders are expected to oversee the patrol division, detectives and crime analysis, and administrative staff.

Other changes are already in the works: The department has reinstated the full traffic unit; police will begin wearing body cameras early in 2023; the police reoutfitted the dive team, and six officers are now certified as bike patrol with the purchase of six bikes.

She told councilmembers she does not want to link that violence to recent changes in police laws. “I don’t want to tie a direct correlation to new legislation or anti-police sentiment, but if I had to hazard a guess, you can see in some instances those numbers have doubled from the last couple of years,” she said.

For the first time since 1992, the department is about to hire its first police cadet; it is a paid internship, usually offered to college students. Bennett wants to reinstate the police explorer program in the high schools, and a Community Academy has also been launched.

Continuing police department goals include reducing crime and fear of crime, improving traffic safety, and responding safely to and resolving emergency calls and incidents and doing it effectively and efficiently. The chief also added new goals: collaborate with the community to address crime; recruit hire, train and promote the best applicants for open positions; and provide the equipment and technology to do the job.

Tuesday evening, Nov. 15, the city council holds its first public budget hearing. The city has already opened up the budget process to take questions from the public. You can find it here along with the complete budget proposals.

One of the first questions on the city’s Q&A webpage is: “Similar to Chief Bennett’s request for new vehicles (which are proposed to be paid from ARPA) can ARPA funding be used to pay for the (Parks) maintenance vehicles?

City Answer: “Yes, we have extremely wide discretion and can spend up to $10 million (total) of ARPA money on virtually anything.”

Another question from the city’s Q&A page: “my concern that we are buying them (police cars) with one-time dollars (ARPA). With all vehicles in the fleet on a set replacement schedule, my sense is that we are setting ourselves up for a future expense in a single year that we aren’t going to be in a position to handle.”

City Answer: “Not true, we are not setting ourselves up for a future expense in a single year to replace these vehicles.” The answer explains that city departments already pay a fee into a ‘Fleet Fund’ for every vehicle they operate. That money is used to pay maintenance and also to “pre-fund” future replacement cost.

What happens when that federal money is gone – how does the city pay over the long term?

All the remaining federal ARPA dollars must be allocated by the city before the end of 2024 and spent by December 2026. But the new parks salaries and benefits are a long-term commitment. So is the parks maintenance for Civic Field and Highway 99 improvements. So is maintenance and replacement for police equipment, new cars, technology, and other items. Over the long term, how will the city pay for those salaries, benefits and maintenance?

Administrative Services Director Dave Turley oversees the city’s budget preparation. He told us that because of COVID “we’ve never before had these circumstances, this kind of experience.” Remember, in all, Edmonds will get $12 million from the federal ARPA funds.

Turley said that the city has budgeted federal money to pay for four of six new parks maintenance positions. At a salary of $63.000 a person, plus benefits, that’s a little over $300,000 a year. He also told us that all federal ARPA money must be spent by 2026. So, we’ve done our own math and once that federal cash runs out, in three years, the city council will have to figure out how to keep those employees on the job. And ongoing maintenance for the Civic Field and Highway 99 amenities will be costly. Where will that money come from?

The police department is not using the ARPA money for new hires, but again, once the federal money dries up, the city will have to cover over the long haul the police vehicle maintenance, new equipment, technology and things that ARPA is nonw paying for. The city will have to find that money in general funds since there will no longer be a $1.3 million gift from Uncle Sam. And Turley expects the demand for police services will only continue to grow.

On the city’s Q&A page, Councilmember Will Chen asked about a different topic, a proposed increase in utility rates for sewer and water: “Utility rate increase of 5% without a rate study. When is the rate study going to be performed?”

City Answer – “a rate study has not yet been scheduled. It should be scheduled early in 2023.”

Turley told us the utility rate increase study should have been done this fall. But at that point, the public works department did not have a new director. Turley thinks with inflation running 8-9% this past year, the department had no choice but to put a rate increase into the budget; if it is not enough to cover the cost of water and sewer services, the council can increase the rate next year.

“The story about our carbon recovery upgrade of our wastewater treatment plant goes from bad to worse. At last night’s Council meeting, Director Antillon said that the construction phase will “likely” be completed by the end of the year. It was supposed to be completed by now. In addition, he said that the commissioning and operational status of the plant won’t be until June of 2023. Another three-month delay from the previous (late) date of March. He also suggested he’s likely coming back to Council for additional funding for the project. How much more?”

“Currently, I don’t have an amount for possible cost increases. We are reviewing all pending change order requests, and some might result in valid cost increases. The quality control and construction management documentation are not very detailed or provide me with a good degree of confidence and considering the complexity of the project it might be good to hire a commissioning agent to ensure someone with that expertise can check every system before we accept it.”

There is still a lot of work before the city can pass next year’s budget. It may be, as the mayor pointed out, that “with strong sales tax revenues, a significant city surplus, and federal rescue plan funding we are in a great position to invest in people and our city.”

But when the federal government money is gone – not only for Edmonds but for thousands of other communities – bills still must be paid. The question yet to be answered: Can Edmonds take the “great position” it is in now and transform it into a long-term funding plan?