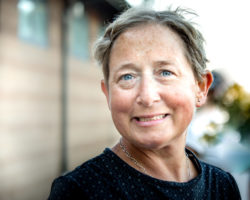 Deborah Osburn Ridgeway passed away on October 31, 2022, at the age of 46 in Stanwood, Washington, surrounded by her loving family.

Deborah was born in Bellingham, Washington, on March 3, 1976 to parents Otis and Phyllis Osburn. While growing up, Deborah spent her summer picking strawberries, “helping” on the family blueberry farm, and showing her sheep at the Lynden Fair. She graduated from Meridian High School 1994.

After high school, Deborah attended Ravencrest Bible College, she worked in Ireland for a coffee shop and bookstore, An Tobar Nua, which reached out to youth in Galway. Deborah attended Skagit Community College and graduated from Whatcom Community College with a degree in Criminal Justice. She worked as a police officer for the Mt. Vernon Police Department, later as a forensic interviewer for the Skagit County Prosecuting Attorney’s office. Deborah continued to work with young people throughout her life as a Young Life and church youth leader, and in a local high school as a para-educator

While pregnant with Maive, Deborah was diagnosed with advanced stage 3 breast cancer. She spent the next several years in treatment before it went into remission. The following years became a true testament of Deborah’s passion for life. In May 2020, the cancer had returned and metastasized into most of her vital organs. “The only good thing that can come out of cancer is that God can be glorified” have been the words that Nick and Deborah have based their outlook on. Anyone lucky enough to call Deborah their friend has witnessed this through her unstoppable sense of humor, her continued unwavering faith in Jesus, and her desire to rise above her circumstances.

While she was excited to join her dad Otis in spending eternity with Jesus, Deborah will be fiercely missed by her people left here on earth. This includes her loving husband, Nick; children Oland, Eleanor, and Maive; mother Phyllis; sisters Rebecca (Rhett), Anita (Daren), Naomi (Kevin) and their families, as well as countless dear friends.

A celebration of life will be held Saturday, December 3, 3:00 PM at Cedarhome Baptist Church in Stanwood WA.