It’s all about how the labor market, turned on its ear during the COVID-19 lockdown, has motivated millions of people to ditch their jobs and give self-employment a try. Or seriously consider taking the big leap.

“I think the last time we saw such a labor disruption was a hundred years ago during the Spanish flu,” said Edmonds resident Steven Cristol. “Even during the Great Recession, most people still went to work. But during the lockdown, while working from home, people got a taste of independence and flexibility. They realized they got to see their kids more. They realized they hated the commute and thought, maybe there’s a different path for me besides getting back in the car and sitting in a bunch of meetings.”

Successfully self-employed for more than 30 years, Cristol is founder of the business-consulting firm, Strategic Harmony Partners, as well as a prolific singer/songwriter. He served on the Edmonds Creative District Advisory Committee and currently sits on the mayor’s Climate Protection Committee.

With such diverse professional experience, Cristol planned his third book on business strategies but found its direction evolved. “The lockdown became a big part of the genesis of it as I reflected on my own journey and how I could help all the people now just beginning their own journey to self-employment.”

The result was No Boss! The Real Truth about Working Independently: 12 lessons from 30 years of Bossing Myself Around. The book is intentionally short, he said. “People are busy. I wanted to give them something they can get through in a few hours. It can also be used as a workbook, with lots of tools to use.” 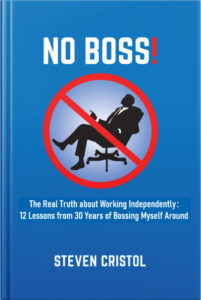 He believes his book offers more substance than the glut of how-to books out there. “So many focus on how to write a business or marketing plan. Almost all of them assume that self-employment is the holy grail of work, romanticizing it,” Cristol said. “But my book helps the reader find out if self-employment is a good fit, and if it is, how to make that happen.”

The book calls for some serious self-examination and awareness. “If you know more about yourself, your expectations and motivations, why you want this, there’s a better chance of success. Someone might say, I want more control but control of what? It’s important to explore these concepts with specifics,” he said.

“I offer tools to use for objectivity. In chapter four, there’s a quiz, 30 questions to answer with as much honesty as you can. It’s a no-boss quiz, designed to help readers think deeply and decide if being their own boss is right for them.”

Cristol says it’s important to determine if you’re running toward something positive rather than running away from something negative. “I like to say that escaping is not a business strategy.”

For those seeking self-employment success, he warns against the trap of perfectionism. “It’s a big one. You know the expression, perfect is the enemy of the good? You have to distinguish between what’s important and overdelivering on things that don’t require that kind of attention.”

Another tip: Be clear-eyed when it’s not working. In a chapter called “Know When to End a Marriage (to an Idea), he advises, “Remember that if it really is not working, it’s not going to be your last idea. Know when to move on.”

He also includes valuable insights from 20 successful self-employed people, identifying patterns in their ability to sustain themselves and their vocations.

For Cristol, and perhaps for most people who are their own bosses, the sweetest reward is freedom to set your own schedule and agenda, especially when it comes to that elusive thing called work-life balance.

“I think the greatest gift about it is flexibility,” he said. “On a Tuesday morning, if I’m out on the water in my sea kayak and not stuck in an office somewhere, it’s okay to work that much harder the next day. Getting to play more is a great benefit.”

No Boss! The Real Truth about Working Independently: 12 lessons from 30 years of Bossing Myself Around is available now at the Edmonds Bookshop as well all major book-selling sites, in paperback and e-book format. More information at www.noboss.me.