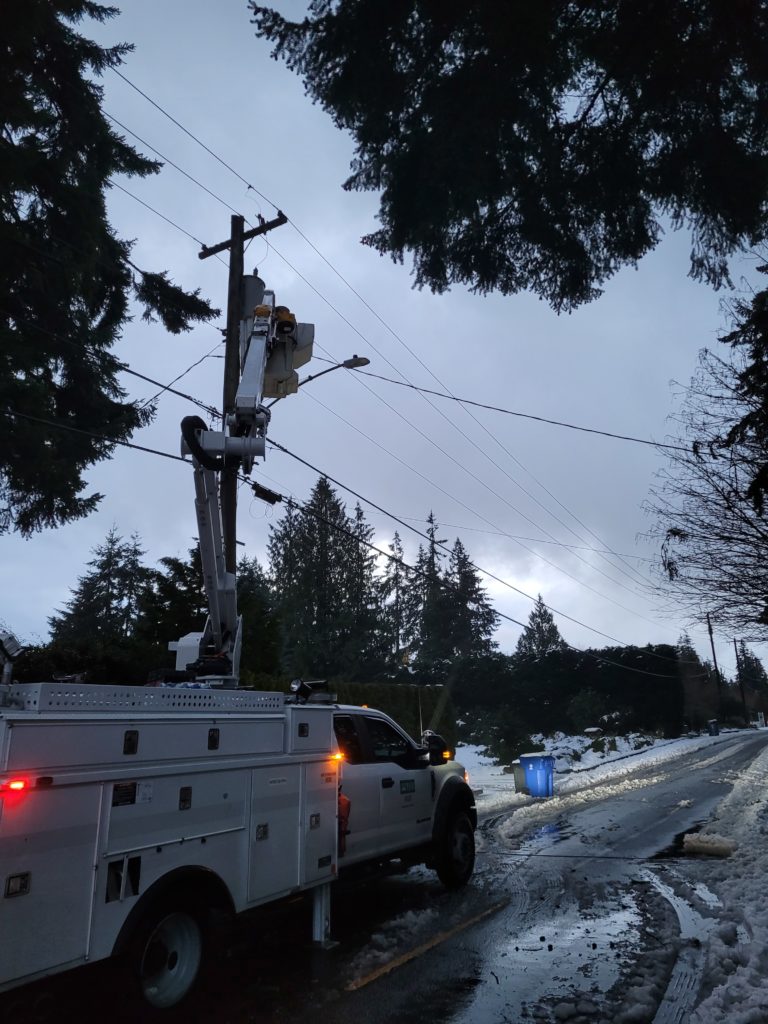 Snohomish County PUD spokesperson Aaron Swaney said that about 28,000 PUD customers were without power Wednesday morning, with most of them in the areas of Edmonds, Lynnwood and Mountlake Terrace.

“We are looking at some significant damage to our system, including trees down across wires and poles down, in the southwest portion of the county,” Swaney said. “We have more than 30 crews out in the field currently, but road conditions are challenging and are currently slowing down our processes. ”

PUD customers can check the status of outages and report one at the outage map link.

Many residents reported seeing flashing lights and loud bangs in their neighborhood, which they assumed was a blown transformer. Swaney said that nearly all of the time that is due to the cutout or fuse that is opening up in the power pole, often caused by an animal or falling branch. “This ‘opens’ the circuit and de-energizes the lines due to a fault somewhere along the circuit,” he said.

Edmonds’ Frances Anderson Center and the Edmonds Waterfront Center are closed. Yost Park is closed. “People need to please stay out of the park due to the possibility of downed power lines and trees,” City spokesperson Kelsey Foster said. “It is unsafe at the moment.” Yost Park reopening will be determined once the damage has been assessed, she said.

With the inclement weather and power outages, some services may be disrupted as city employees will be working remotely or are unable to make it onsite. Please call or email directly as needed, Foster said.

As for the streets, snow plows were running all night and continued Wednesday morning. Many trees were also down and tree crews cleared every tree that didn’t have any power lines in it.

Seven roads that were closed due to trees down have been cleared and are now open. Thirteen road closures waiting for PUD to clear power lines, Foster said.

All of the sewer lift stations were without power at one point but power has been restored at eight of them. Of the remaining six without power, three are on generators and the crews are monitoring them. Generators are ready to deploy at the other three lift stations if needed, Foster said. No spills or overflows have occurred.

As of Wednesday morning, there were also four traffic signals down. “Our signals are on batteries but if the power is out too long the battery gets used and the signal no longer works,” she explained.