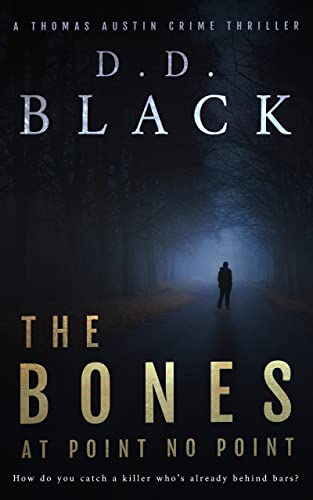 The Bones At Point No Point, by D.D. Black

When justice is delivered and a serial killer is behind bars, society can breath a collective sigh of relief, but not in “the holiday baby butcher case.” Thomas Austin is a retired NYPD detective, having served loyally for 20 years, and this case had sucked life out of him, leaving an indelible mark. Moving to the Pacific Northwest, Austin opened a business for a new start, but now the killings have begun again. Why has the torment followed him across the country from New York? The case continues to haunt him, now with a long and grisly reach, from prison.

A serial killer, a baby butcher caught in New York after a horrific murder there, was returned to Seattle to stand trial for her murders previously committed in that city. Now notorious Lorraine D’Antonia is locked away in the maximum security wing of the Washington Correction Center for Women, case closed. Until a disturbing report surfaces two years later. Someone is butchering babies again, a sinister intent by a force of mystery.

Thomas Austin is called by the Kitsap County Sheriff’s Office for his expertise on his work on the case in New York. How will he answer? Will his response come in time, before another chilling discovery is reported of The Bones At Point No Point. Is the world worth saving, one case at a time?

Members of the small county sheriff’s office have their hands full with a gut-wrenching murder mystery. Their best officers are on the case, but there are many clues to sift through, and some sharp detective work needed. There’s a lot to learn from the horrific murders committed by the imprisoned Lorraine D’Antonia’s, and there are new twists. The most experienced officers are involved, and all hands are on deck in this investigation. Time is not on their side, as the next holiday is fast approaching.

Intrigue hooks you from the start of this suspenseful thriller. You’ll be analyzing the clues along with the team, and be mesmerized by the most compelling scenes. The author skillfully creates the most interesting characters. Thomas Austin resonates as he acts on impulse, and on instinct from his years of experience. His dearest companion — his irresistible, scruffy dog Run — brings out a most touching side to Austin. So does an intrepid reporter, Anna. Revelations of Austin’s personal history bring an added dimension and tone to his personality. The team members at the sheriff’s office are so artfully created by the author, they soon feel like friends in pursuit of answers along with the reader, and working hard to deliver results, or trying to. It’s a treat to learn about them when they’re on the job and during off hours. Beware though, danger can strike at any time when a serial killer is on the loose.