Updated Nov. 22 with the City of Edmonds response.

An attorney representing Sherman Pruitt — who was confirmed as Edmonds’ police chief only to have the offer rescinded a week later — has filed a legal claim against the city; usually the first step toward a lawsuit.

“Chief Pruitt is a highly qualified, seasoned police chief,” said Pruitt’s attorney, Beth Bloom. “He was looking forward to accepting the position of chief of police and he and his family have been devastated by the withdrawal of his job offer under circumstances highly unusual and tinged with racism.”

The claim, said Bloom, is that the city discriminated against Pruitt “based on race” when it denied him the position of chief. This is a precursor to a possible lawsuit; the city has 60 days to investigate the claims before attorneys can file. “We are,” Bloom added, “doing our due diligence, continuing to investigate.”

“The city stands behind its decision to withdraw Sherman Pruitt’s conditional offer for the position of chief of police due solely to his omission of important employment information from his personal history statement,” she said, “a statement that expressly requires complete and full disclosures of all relevant background information. Any other reports or suggestions are false. The city looks forward to defending its actions in court.”

The city council was bitterly divided over the nomination. Some members questioned Pruitt’s qualifications and asked about past domestic violence incidents and another police investigation of him. Other members argued that Pruitt was what the city needed — a veteran officer and person of color who could bring diversity to Edmonds.

In 2020-21, My Edmonds News investigated the questions around Pruitt’s past and found that he had been reprimanded twice when he was in the Marine Corps for instances of alleged domestic violence and that his commander ordered him to counseling.

Our investigation also uncovered that the Seattle Police Department (SPD) had hired Pruitt as a cadet in 2004, but just three months into training, SPD terminated him for “failure to successfully complete the probationary period.” We discovered that while in training, DuPont (Pierce County) police had investigated him for threats Pruitt allegedly made to the manager of a restaurant in which his wife worked. Shortly after that, SPD terminated him.

In November 2020, prior to interviewing Pruitt, none of that information was included in an application packet the city administration sent to councilmembers. Councilmember Vivian Olson tracked down testimony by Pruitt in a federal civil rights case in which he was questioned about two domestic violence incidents. Other members urged a delay in the confirmation vote. But Mayor Nelson and then-Council President Adrienne Fraley-Monillas agreed to move up the vote a week earlier than planned. The council confirmed Pruitt 4-3. One week later the mayor rescinded the offer. That forced a new chief search; for 18 months, the city was without a permanent chief. 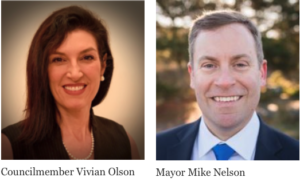 Pruitt’s attorney argues that Nelson and Olson defamed him by “unjustifiably attacking his reputation and integrity.” The claim says Olson accused “…Chief Pruitt of lying on his job application…” and that she suggested to the media “that Chief Pruitt had perpetrated a domestic violence incident.”

Bloom said there is “ample circumstantial evidence of racial discrimination leading to the mayor’s withdrawal of the job officer for the chief.”

In her statement, Neill-Hoyson responds: “The City of Edmonds embraces and support(s) all areas of diversity. The city is committed to creating an inclusive environment for the entire community. Employment decisions are based on job requirements, individual qualifications, merit and business needs, and not race or any other protected class status.”

The claim contends that Pruitt has suffered economic and non-economic damages, still to be determined, and “they are valued in the millions of dollars.” The city has 60 days to respond before any suit can be filed.