Perhaps you’ve noticed the signs near the freeway exits to Edmonds that say “Creative District Ahead,” and wondered, “what does that mean?” I spent some time chatting with Todd Tatum, the City of Edmonds’ new economic development director, discussing this designation and what it entails for the city.

Edmonds was the first Creative District chosen in the entire state of Washington. “This says a lot about our arts community,” Tatum observed. “They put a lot of effort into making Edmonds a home for all things arts. There has always been a strong narrative of Edmonds being an artistic center, so we were prepared for the designation when it came into place and were early to jump on the application process.”

I asked Tatum what the designation means for Edmonds creators, and how this will impact and strengthen them. Todd answered that the designation has been in place since 2018, but because of COVID, there was a swath of time where the city didn’t get to develop the definition and meaning of being a creative district. He remarked that “in the near term, it’s a recognition that something special exists here, and it’s a powerful organizational tool. It’s an idea that the arts community can rally around. It provides a way to talk about the creative industry in Edmonds and helps get our marketing messages out farther. It’s a tool to make the whole greater than the sum of its parts. It also allows us to gather around the idea of the Creative District and provides a forum of what it means to further the needs of the district as a whole.”

There are different creative centers within Edmonds — including fine arts, theater and music — and the Creative District enables these creators to unite across genres and work together on issues that impact the arts community as a whole, Tatum added.

On the horizon, Tatum said he is excited that the Edmond City Council just authorized $75,000 to develop a community cultural plan. This plan, which is created every six years, allows the city to look at what’s going right in the arts community and what needs more emphasis. The city will start this process in 2023 and there will be more opportunities this year to discuss arts and culture and its future in Edmonds.

At the end of 2023, Edmonds will recertify as a Creative District and will need to develop a work plan as part of the application process. Creators will have the chance to discuss their ideas during that process. 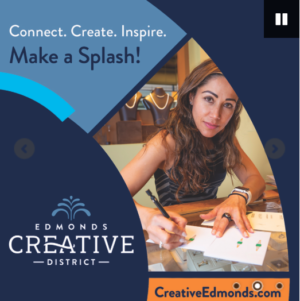 In 2019, Edmonds developed basic Creative District branding and a logo. At the beginning of 2023, Tatum said, the city will create a positioning framework for how the district will work to attract both visitors and businesses.

While there are no firm dates on the calendar yet, toward the end of the first quarter 2023, the Edmonds community, businesses and artists will begin to meet to hash out the plans and positioning, he added.

I asked Tatum if he had any final notes to include. He articulated “something everyone is concerned about right now is supporting the workforce in Edmonds. The (Edmonds) Chamber of Commerce and the city are looking hard at ways to do that and ways to support the creative economy here, and ways to grow and use the tools we have within Edmonds. We have an incredible amount of entrepreneurship and know-how in the creative industry, so how do we leverage that to grow new creatives and support each other?”

Elizabeth Murray is a freelance writer thankful to call Edmonds home. When she’s not busy wrangling her two kids (and husband), you can find her playing ukulele and singing with The Band LeLe.