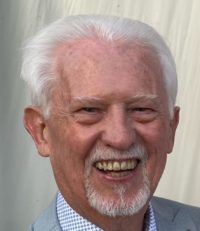 Tom was born on March 3, 1943 in Jerome, Arizona to Thomas H. (Sr.) and Roberta “Ailene” (Grigg) Dockins. The Army family lived in several states, including Pennsylvania, before settling in Olympia in Washington state after being stationed at Fort Lewis. Tom graduated from North Thurston High School in 1961. He enjoyed being a radio DJ on KLCC at Centralia College, where he met fellow student and future spouse, Edla Grant. The couple married in Chehalis, WA in 1963.

Tom and Edla’s first daughter, Brenda, was born in Olympia; their second daughter, Kathy, was born after they moved to the Seattle area. Tom started his long career in “Data Processing” (now called IT) at the Bonanza 88-Cent store he managed in Longview, WA. When the store bought its first computer, they asked Tom to learn to program it, and his more than 30-year career in computer technology was born. He regularly brought home computer punch cards for scrap paper, and used a dot-matrix printer to make posters of the Peanuts character Snoopy holding signs saying, “Brenda is Cool” or “Kathy is Cool.”

Much of his career was spent traveling to other states (and even Canada) to help his employers’ clients set up and customize the accounting programs they had purchased. In the private sector, Tom worked for DEN, Sartoris, Washington Mutual, and Boeing (working on systems for the 777). Tom also enjoyed stints in the public sector, with the City of Seattle and Kitsap County. In the 1980s, it was at the City of Seattle’s Comptroller’s Office where he recommended the adoption of a new payroll process called Direct Deposit, which the City promptly implemented. The rest is history!

When newly single, Tom moved to Edmonds, Washington, a community which he loved and where he lived up until being hospitalized before his death. In his retirement, Tom took up photography as a hobby and was happy to share his photos with family, friends, and local papers (including My Edmonds News). During the time he lived right on the beach, his favorite subjects were sunsets over Puget Sound, coastal wildlife, Washington State ferries, and other sea vessels including the Lady Washington (featured in Pirates of the Carribbean, and Star Trek: Generations, among other media appearances). A few of Tom’s other “favorite things” include music (especially blues, jazz, The Beatles and Led Zeppelin), watching sports of all kinds (especially the Mariners and Seahawks), fishing, and playing softball.

He loved his family deeply and will be missed by them and all those whose lives he touched. He is survived by his daughters, Brenda J. Schenck and Kathy A. Dockins; his son-in-law Scott Schenck; his grandchildren Steve Schenck (and wife Lexi), Joe Schenck, Hannah (Schenck) Moncayo (and husband Sef), Mark (and wife, Luz); as well as his children-in-spirit Toby, James and Brandon and their children. He is also survived by four great-grandsons: William, Noah, Damian and Isaiah; two sisters: Roberta “Bobbie” Woods and Margaret “Beth” Dockins; former spouses Edla and Rosi; several brothers- and sisters-in-law; dozens of nieces and nephews, and scores of friends and neighbors (most recently at The Continental in Edmonds).

He was preceded in death by his father, Thomas Sr.; his mother, Ailene; his son, Michael Christopher; and grandson, John Samuel Schenck.

Because Tom loved warm weather and sunshine, his family will be holding a celebration in his honor in the spring of 2023. To receive event information, please send an email to: thdjrcelebration2023@gmail.com.