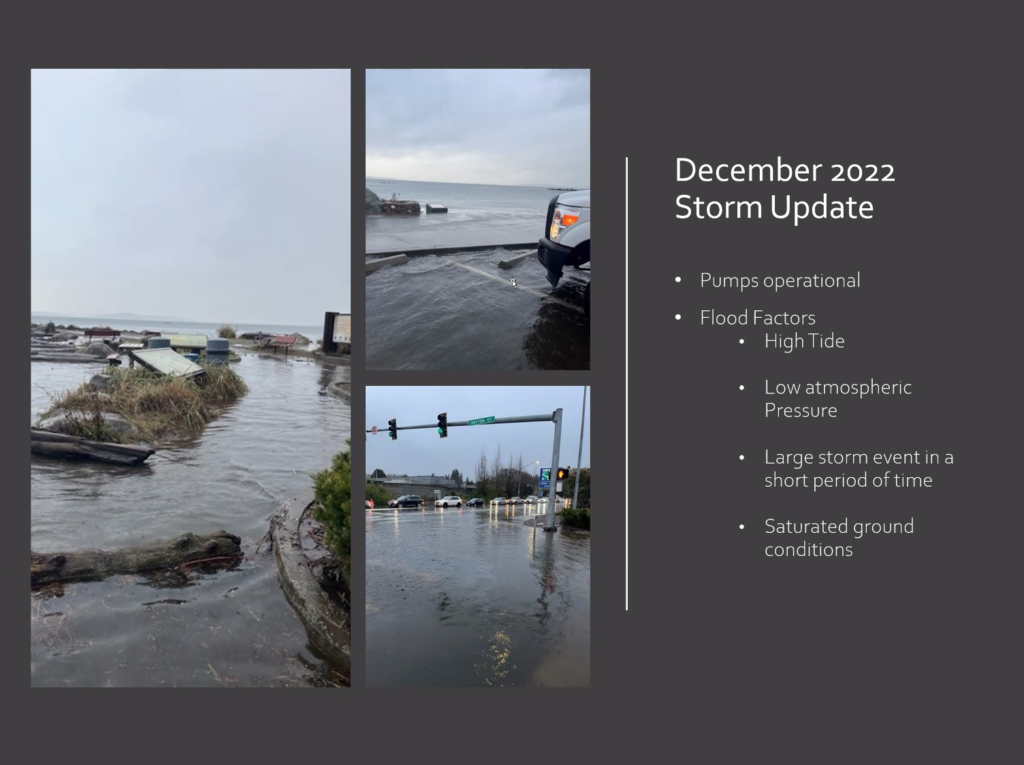 When it comes to flooding, the area of Dayton Street near the Edmonds ferry holding lanes has been particularly problematic — and this was the case again when heavy rains pummeled the Puget Sound region in late December. The city’s new Dayton Street Pump Station, which came online in summer 2021, was hailed as a way to address the problem — although some wondered if it was working properly during the most recent storm.

The answer, Edmonds Public Works Director Oscar Antillon told city councilmembers Tuesday night, is that yes, the pumps were operational. But the new pump station couldn’t keep up with what Antillon described as a perfect storm — literally — of factors: An extremely high tide of 17 feet, low atmospheric pressure, heavy rain during a short period of time, and saturated ground conditions caused by melting snow and ice from a winter storm the week prior.

“The result…is the perfect combination for something like this,” Antillon said. “The runoff, most of it, went into into streets and into our storm system.”

“We’re basically pumping the bay (Puget Sound),” Antillon continued. “So the bay is pushing water into our system and we’re pushing it back. Mother Nature is going to win in that case.”

In addition, Antillon told the Council Parks and Public Works Committee, the new pump station is just one of several projects needed to address flooding in the area. Past city studies have focused on a range of recommendations, including the daylighting of Willow Creek as well as projects planned by the Washington State Department of Transportation (WSDOT), indicated in blue on the map below). 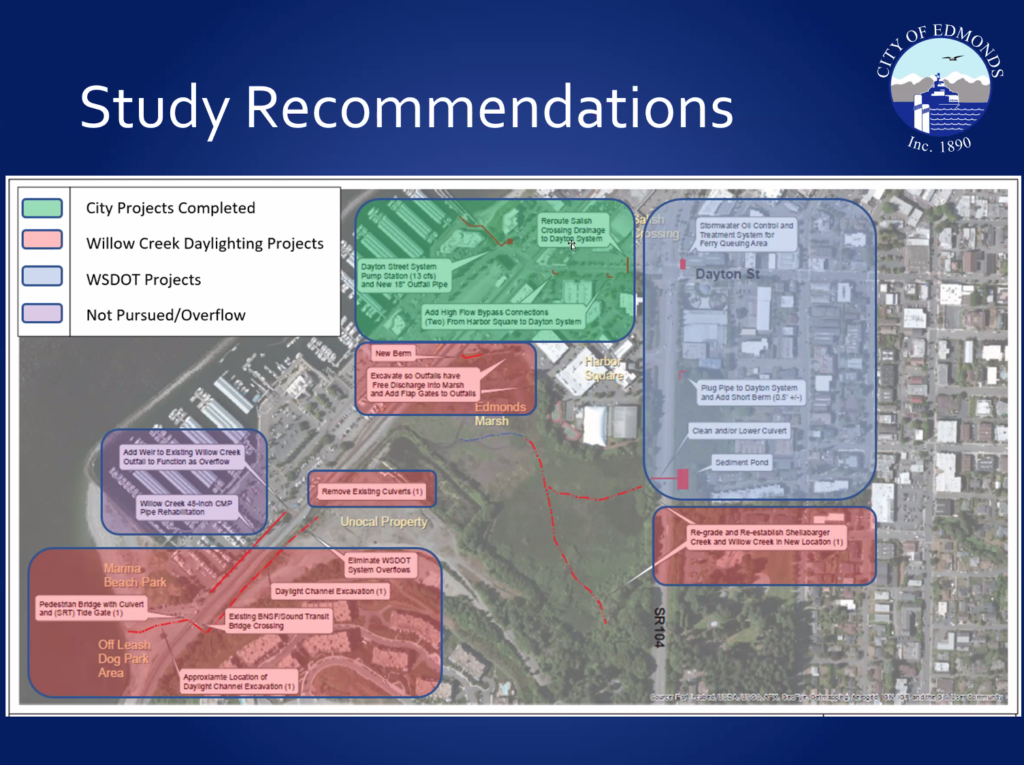 Willow Creek currently flows through the Edmonds Marsh, then enters a 1,600-foot piping system, to Puget Sound. The Willow Creek project has been delayed due to cleanup efforts on the nearby Unocal property — which the city needs to cross to complete the daylighting between the marsh and Puget Sound.

City Engineer Rob English added that the Dayton Street Pump Station “was just one set of improvements to solve the flooding and issues down in that area. The daylighting of Willow Creek…is a critical part of solving the flooding issue because right now there’s just a pipe that goes out to the sound, so when that water level backs up into the (Edmonds) Marsh, it takes a long time for that water to drain now,” English said.

Given the effects of climate change and sea-level rise, Councilmember Dave Teitzel asked if the city would have to learn to live with these type of storm events or if there was something that could been done to address them. Antillon said the city will need to examine possible solutions as part of its long-range planning process.

Councilmember Vivian Olson wondered if there was a way for the city to have a conversation with WSDOT about planned flood-mitigation projects “to let them know how much we are being impacted in these weather events.” Antillon agreed that such discussions would be possible — either directly or through the city’s lobbyist.

Antillon noted that WSDOT has raised the height of its toll booths in the ferry lanes to mitigate flooding issues, after which Olson observed that such a measure doesn’t solve the problem of ferry-bound vehicles not being able to navigate the flooded roadways in the first place. Highway 104, which runs to the ferry terminal, is a state highway, and “I would think for the access of using 104 that they would want to be doing something,” she said.

Regarding the ongoing question about who is — or should be — responsible for shoveling snow on city sidewalks, Antillon reiterated that city code specifically states that residents are responsible for sidewalk snow removal. Councilmember Dave Teitzel said he is researching the idea of a  “neighbor-helping-neighbor” approach — he is calling it Snow Angels –and has contacted a couple of volunteer agencies to see if such an effort could be coordinated.

Antillon also said he plans to address another concern of residents: When snow plows leave a berm of snow on the sides of streets and sidewalks, making it even more difficult for those who are walking or shoveling. “That’s something that I plan to discuss with the (plow) operators,” he said. 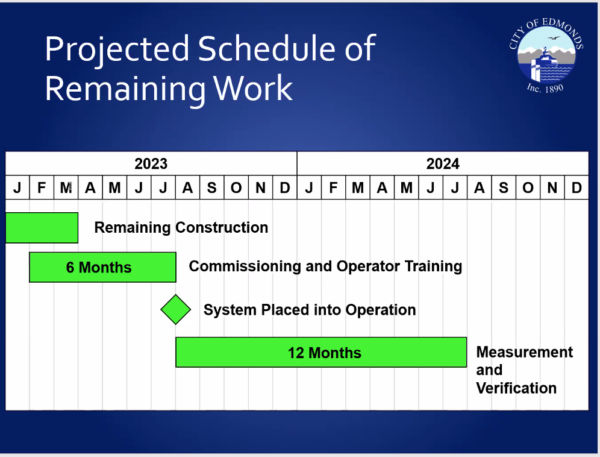 And finally, Antillon provided an update on the city’s carbon recovery project at the wastewater treatment plant — a gasification process that is replacing the aging sludge incinerator. According to Antillon, 90% of proect is completed. Next comes the commissioning process, which is expected to take six months, after which the system will begin operations.

The public works director will deliver a report on the carbon recovery project to the full city council soon.

During the Council Public Safety-Planning-Human Services-Personnel Committee, councilmembers received an update on the repairs being made to the Edmonds Library, which has been closed since an irrigation pipe burst in June 2022, flooding the 17,000-square-foot library and leaving 2 inches of standing water.

Edmonds Planning and Development Director Susan McLaughlin said the city has been working with Sno-Isle Libraries to coordinate the repairs.

Edmonds voters agreed in 2001 to approve annexation of the city-owned Edmonds Library, located at 650 Main St., into the Sno-Isle Libraries system. As part of that agreement, the city maintains ownership of the library building and is responsible for outside maintenance, while Sno-Isle maintains the building interior.

The leak damaged library furniture and partitions but the book collection was spared. Damage to the building included walls, flooring, bathrooms and the elevator. Both the city and Sno-Isle are “working through insurance claims,” McLaughlin explained. “The repair and restoration gets complex as they are shared responsibilities” that are outlined in the annexation agreement, which McLaughlin said was “quite dated.”

“We will want to look at an amendment to our annexation agreement on some of the anticipated costs and how we’ll cover those as part of this renovation work,” she added.

Meanwhile, the city provided space in the rooftop Plaza Room to launch a pop-up library, where customers are able to browse and check out materials, and also offers printing services.

McLaughlin said the city and Sno-Isle are balancing the desire to open the library as quickly as possible with a desire to make some improvements to library interior, with an eye to “resiliency, accessibility and sustainability.”

Sno-Isle has hired a professional public library architect, Johnston Architects, to determine the scope and design.

The plan is to open the library by summer 2023, in time to accommodate an eager group of young summer readers fresh out of school.

City of Edmonds Facilities Manager Thom Sullivan explained the work completed so far, noting the city has concentrated on ensuring the library elevator is operational and both public restrooms “to a remodeled state.” Both restrooms had to be gutted due to water intrusion behind the tile, and some updates have been made, including updated countertops, touch-free fixtures at the sinks and toilets and new lighting. The city is aiming for the week of Jan. 16 to open the library lobby and elevator as well the restrooms, Sullivan added.

“We’re already teaming with Sno-Isle to look at their options for renovation,” Sullivan said. “It’s going to be a little bit of a dance between contractors — between restoring it to pre-event conditions and accommodating the upgrades…The time frame is going to be tight.”

Sullivan and McLaughlin also noted that the library building has ongoing issues with a leaking roof that must be addressed.

Councilmember Jenna Nand asked whether it would be possible to provide computer and printer access to “more modest income people” who rely on the library for those services — if not in the library itself, perhaps in the pop-up space.

Susan Hempstead, Sno-Isle’s assistant director for strategic relations, replied that the pop-area doesn’t have room for those services, but noted that in the interim, libraries in nearby communities do provide them.

What happens next? “We’re looking to see where the costs will settle,” McLaughlin said, adding she anticipates that 90% of the city’s expenses will be covered by insurance. However, staff plans to come before the city council — perhaps in February — to address possible amendments to the annexation agreement, which will affect the scope of work for architectural services.

Sno-Isle Libraries noted that is has added a project update section to its website so community members can monitor the progress of reparis.